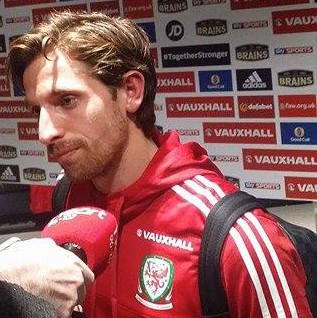 WALES’ Joe Allen admits he would relish the opportunity to play England at next year’s European Championships.

Chris Coleman’s side finished their campaign with a 2-0 win over Andorra, courtesy of goals from Aaron Ramsey and Gareth Bale, having already secured their place in France next year.

And Allen revealed that he would be more than happy to face England, who qualified for the tournament with two games to spare.

“I think it’s a game that we would look forward to. They’ve won 10 out of 10 so they’ve had a fantastic campaign,” the Liverpool midfielder told the media.

“They’re obviously in great form so they’re the type of team you want to play.

“It’s great to be there with them. We’re obviously used to just watching them set off and get on with it.”

It was a night of celebration in the Welsh capital, with Wales able to relax and enjoy the extraordinary atmosphere generated by thousands of passionate supporters.

The full-time whistle was followed by a presentation of the players individually and a lap of honour around the pitch.

And Allen evidently enjoyed the occasion.

“Obviously to have this game spare to enjoy in front of the home crowd was great and to end it with a win made it extra special,” the 25-year-old commented.

“It was a cause for celebration. We wanted to make sure we did celebrate because it is a major achievement for us.

“We’ve worked really hard to get there so it’s a great feeling to celebrate tonight and the support was once again fantastic.”

The former Swansea City man is now excited about the prospect of helping Wales compete amongst the best come June.

“Our only focus was to ensure qualification. Obviously now we’ve done that, we can take the next step and we look forward to showing what we can do next year in France,” he added.