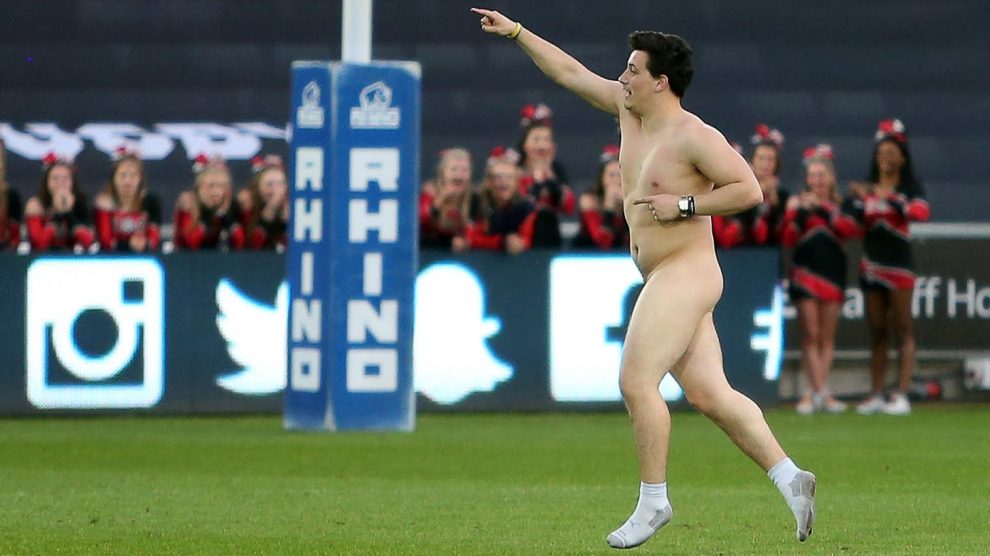 If you were at Welsh Varsity last year, you are likely to remember the Cardiff streaker who valiantly ran onto the pitch in the buff during the half-time break.

At the time, the Swansea Sirens cheerleading group were performing their routine, until the streaker decided to ruin that in some style.

And in an exclusive interview with Gair Rhydd, the Varsity Streaker has revealed what the experience was like at Swansea’s Liberty Stadium.

He said: “The stewards had asked me to leave after I took my top off and waved it around. Me and my mate had been talking about doing it all day so I quickly got into my birthday suit, got a leggy over the barriers, side stepped a steward and ran onto the pitch.

“I did a little loop, but I ran out of breath and had to run back to my mate. I only remember little snippets really, the best bit was looking up at a massive wall of red and the cheering.”

The streaker admitted he was taken away by police after his jolly around the Liberty pitch in front of 20,000 people.

“I was doing a windmill and I think the officers didn’t like it very much,” joked the streaker.

“They kindly escorted me to the local police station and I spent a few hours there before having to get a £60 taxi back to Cardiff – excellent hotel service, I would highly recommend.”

Asked if we could expect a repeat at this year’s event at the 75,000 seat Principality Stadium, the streaker quickly dismissed the possibility.

He said: “There was talk of me about possible sex offender charges, so I don’t really fancy that. But I reckon if everyone takes there tops off and waves them around then they cannot kick us out. We need to sing and support Cardiff as much as possible and make it a really good atmosphere.”