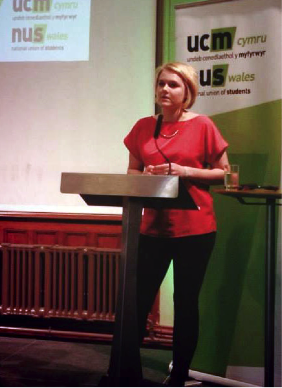 Cardiff’s former Education Officer, Beth Button has been elected as the President of the National Union of Students Wales (NUS Wales).

Ms. Button was the Education Officer at Cardiff University Students’ Union in the 2012/13 academic year and was subsequently elected to the position of Deputy President of NUS Wales at last year’s NUS Wales Conference.

In this year’s event, Button stood unopposed, but still won by a landslide.

She will take over from Steph Lloyd who praised Button, saying that she couldn’t imagine anyone better to succeed her, and thanked her for all her hard work as Deputy.

In her manifesto, Button says that she wants to ‘readdress how we [NUS Wales] work, both as an organisation and a movement.’

She wants to see ‘Community Organising’ become an action, with partnerships between institutions and their communities as well as leading community organising training.

Having led both the ‘pound in your pocket’ & ‘Fund Further, Fund Higher’ campaigns, she says will continue to fight to preserve vital funding for post-16 education.

Speaking to gair rhydd, Button said: ‘ I’m so excited to have been elected NUS Wales President for what is going to be an important year for students.

‘With elections both here in Wales and in Westminster, reviews into Student Finance and significant cuts hitting our institutions, we’ve got some big challenges on our hands as a movement, and I can’t wait to get started.’