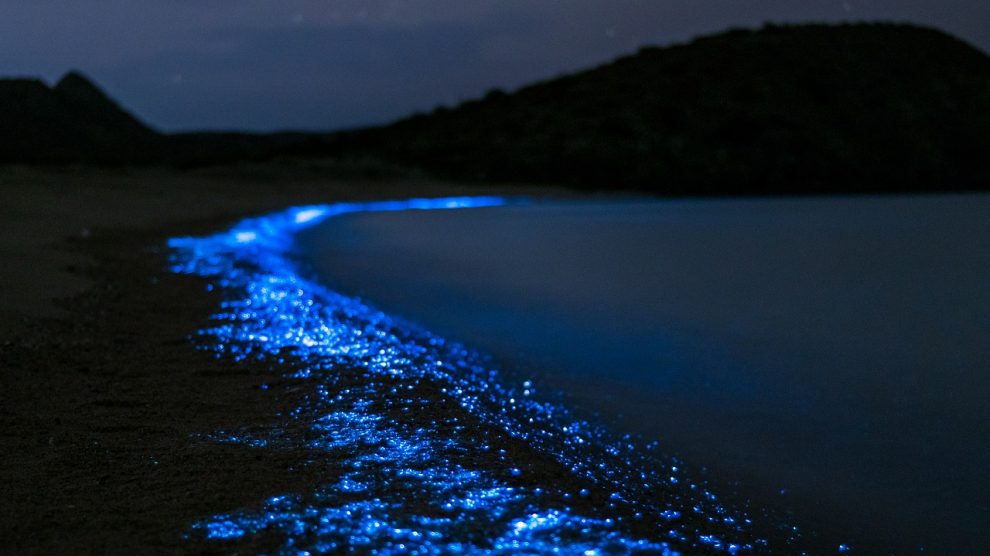 ‘Algae’ is an informal term for a diverse group of photosynthetic, eukaryotic organisms. They mainly exist in water-based environments, such as oceans, lakes and even snow. There are an estimated 72,500 different species of algae. Under the right conditions, some species (dinoflagellates) appear to glow.

Bioluminescence is defined as “light produced in an organism by chemical reactions”. Examples span throughout nature, from deep sea fish to fireflies, in a range of different colours (most commonly blue).

The eerie and hypnotic glow is caused by oxygen reacting with luciferin. This reaction is accelerated by the enzyme luciferase, and excess energy is released as visible light. This process only occurs when the algae are disrupted by movement, which is why only the edges of waves or the water around fish are illuminated. It’s a natural defence mechanism, described by Biologist Rebecca Helm as “luminous little panic attacks”.

The intensity, duration, and colour of the light varies depending on what species are present, and makes for some impressive photos after nightfall. Though the phenomenon is quite rare, it can be found across the globe. The most spectacular displays are in Puerto Rico and Australia, but you can see glowing waves in the UK too! Caswell bay (Gower) and Penmon point (Anglesey) are particularly good Welsh spots.

In the dark, bioluminescence is undeniably beautiful and unequivocally spectacular. But these dinoflagellates do not produce light for human admiration. In high concentrations, frequent and harmful algal blooms (HAB) can occur. In humans, exposure to these phytoplankton can cause skin irritation, sickness, and even death, and can wreak havoc on ecosystems.

Because of their abundance on the surface of water bodies, HAB can appear to discolour water to green, brown, or purple colours. ‘Red Tides‘ are the most infamous bioluminescent algal blooms. Named after their reddish oil spill appearance in water, these colonies are made of the same sparkling algae adored on Instagram.

Red tides can occur naturally, but only ever infrequently. Over the last decade we’re seeing larger and longer lasting red tides more often. Scientists theorise this could be due to a cocktail of factors such as water pollution (from sewage, agriculture etc), rising ocean temperatures, and severe weather events.

Algal blooms can be dangerous to humans (e.g. if ingested or infected), but the most damage occurs at lower trophic levels. Filter feeders such as shellfish collect their food by pumping water through them. In areas of red tides and other HAB, they accumulate the algal toxins in higher and higher concentrations. This often kills the shellfish outright, but those toxins can then be passed up the food chain when they themselves are eaten. Fish, birds, animals and humans can be poisoned by the contaminated organisms.

This can result in wide spread deaths (especially of fish), causing a dangerous domino effect across ecosystems already fragile from exploitation and climate change. There are also economic impacts, with Woods Hole Oceanographic Institution calculating that harmful algal blooms cost America roughly $500 million in the year 2000. This number will increase with the blooms.

Seeing or swimming in bioluminescence can be a magical experience. The neon blues and greens are a wonder to behold, but they have been twisted into something toxic and deadly by human negligence and ignorance. Scientists worldwide are working on ways to predict and minimise the most dangerous effects of HAB. In the meantime, bioluminescence serves as a reminder that beautiful things can quickly become deadly.