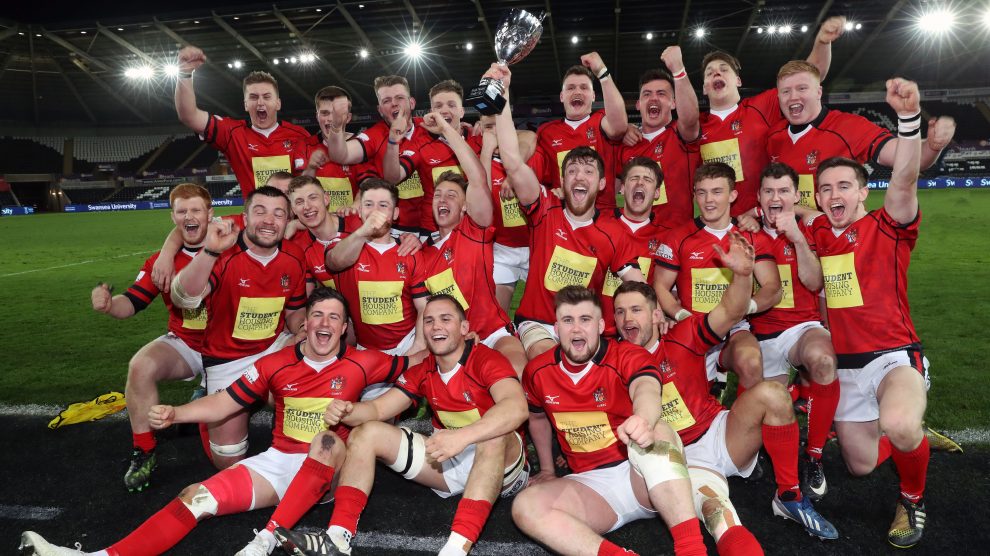 by Mark Wyatt at the Liberty Stadium

Cardiff University ran out deserved winners in the showpiece rugby match of the 2018 Welsh Varsity at the Liberty Stadium, overcoming Swansea by a score of 23-15. It was a flourishing performance for the Reds who lead at halftime after a James Homes try put them into the driving seat following a nervous start.

Cardiff had to dig deep in the second half, adding a try and two penalties to the scoreline to ensure the victory.

The match was not without its drama though, as Swansea were awarded a penalty try with 5 minutes remaining to close the gap to 8 points and leave Cardiff sweating to see out the game. Eventually the full-time whistle was blown and a jubilant Cardiff side lifted the Varsity Cup for the second year in a row.

Cardiff head coach Alun Wyn Davies stressed in his programme notes that the match was a “one-off game with all to play for” and it certainly felt that way in the opening stages.

Despite beating their neighbours twice in the domestic season it was Swansea who started the brighter of the sides with some sustained possession courtesy of Hywel Williams on the left-wing. Cardiff searched for some rhythm of their own and found it with some neat passes through the middle before James Davies put Cardiff ahead with the boot.

A great deal of good fortune soon put Swansea ahead however as an opportunistic grubber seemed to allude every person in the stadium before it finally dropped in the hands of Hywel Williams, who gleefully took the plaudits in front of a bumper Liberty crowd.

Davies once again put Cardiff ahead with a penalty before Rory Garrett made up for missing his conversion when he slotted home one of his own after Cardiff were penalised at the breakdown.

The crowd is always incredible and the chance to represent Cardiff University on a stage like this is unreal – James Davies, MOTM

For the next 10 minutes, Cardiff were excellent and stretched Swansea to the edge of the goal line, where they were rewarded when prop James Homes bundled in and Davies added the extras to make the away side go into the half 13-8 up.

The fiery opening 40 minutes seemed to cause the tempo to slow down in the second half as Cardiff sought to gain a hold of the match. Rory Garrett misfired a penalty and it seemed to be the spark that ignited the away side into life again. A number of scrums from 5 metres out eventually allowed Chris Williams to bundle over, with James Davies keeping up his 100% record in the game by converting again.

Leading by 12 points the game was poised for Cardiff to nail on their victory and they certainly helped their cause when Davies fired in a penalty from 40 metres.

With five minutes to go, Swansea promised to keep the victory in the balance when they were awarded a penalty try, but Cardiff did excellently to hold on and cap off a fantastic day for the university, who also regained the Varsity Shield earlier in the day.

“They had us on the ropes a little bit in the first 20 minutes, we expected it to be tough though because they are a good side” said man-of-the-match Davies after the match.

“We managed to stay in the game, keep the points ticking over and eventually get the win so it was a really great game to play in.

“Varsity is the game that everyone wants to play in, everyone works for it all year and it’s a once in a lifetime experience. The crowd is always incredible and the change to represent Cardiff University on a stage like this is unreal.

“It’s a great feeling [receiving man-of-the-match] but it’s on behalf of the team this one, I’m just lucky I’m the kicker I guess!”

But despite being able to celebrate with his players at the full-time whistle, he hailed it as an ‘ugly win’.

“We’ve always said that if we look out for the performance then the result will take care of itself and it did. I think we were just superior to them defensively and that was enough on the night.

“We knew that both teams would make mistakes early on because neither side have played together for six or seven weeks. In the second half I don’t think they looked threatening at all though.

“We had total control but it was an ugly win in the end!”

The perfect end to an almost perfect season

It’s been quite the year for CURFC who have seen 2 out of their 3 senior sides promoted (the 1st XV will be playing in the coveted BUCS Super Rugby next year) whilst their final senior team had to settle for 2nd place in their division.

“The club is currently in a great position off the back of that win and it’s purely down to all of the players.” said an upbeat Davies

“It sounds cliché but it really feels like the whole club is together as one, we’ve had a senior group of 45-48 guys all year round who’ve really stuck at it.

“It may not feel like it, but every member of the club had their part to play this year in Varsity, a really positive impact.

“It was a fantastic end to the season to have everyone in the club supporting us in the stadium, even the boys that didn’t get to play.

“How I see it is that I work for them and they’re the ones who deserve every bit of credit for they’ve achieved this season.”