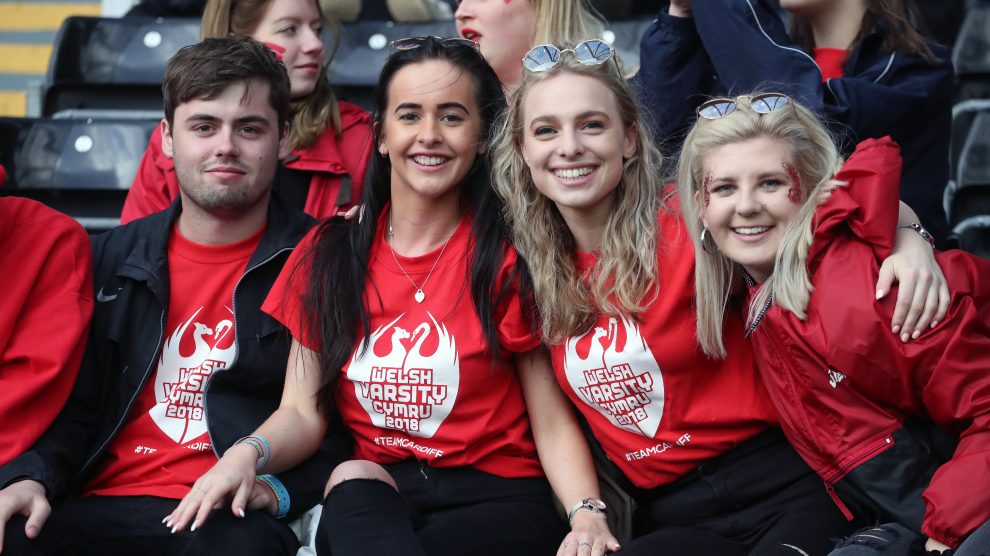 Cardiff and Swansea will be battling it out in this years Varsity in the Welsh capital.

Welsh Varsity is coming back to Cardiff with the announcement coming at the end of January.

Last time out, Cardiff came away winners of the Varsity Shield with a 27-16 win over Swansea on opposition soil. The Cardiff rugby team added more glory with victory at the Liberty stadium meaning the Varsity Cup would also be returning to the capital.

Varsity is an important and exciting time for all those involved, which is why we have been speaking to Cardiff’s Sports Vice President and Athletic’s Union President Georgie Haynes on all things Varsity.

“Varsity will be taking place on Wednesday 10th April in venues all across the city throughout the day. The day will finish with both the men’s and ladies rugby matches in the Principality Stadium.

The first official event will be Rowing, which takes place on Saturday 6th on the River Taff.”

For all of the Cardiff teams competing it is a big occasion, one that they will not want to end in defeat.

“Varsity is the highlight of their competitive season, so success on home turf would mean a huge amount!”

As a city, Cardiff has so many fantastic venues for sport. This goes for the players, and also the fans who can play a huge part in spurring the home side onto victory.

“The fans coming to support both universities will be able to spectate in some of the best sporting venues Wales has to offer.

For Cardiff, the home advantage will boost their confidence going into game day, and I’m sure all our teams will rise to the occasion!”

Varsity is a festival of sport, and the supporters play an important part just as the players do in making the event into the amazing spectacle that it always is. Georgie gave us the best way for Cardiff students to show their support.

“Ticket information will be released the week of the 11th February, so keep an eye out on the Cardiff Students social media for any announcements!

We will be using the hashtags #TeamCardiff and #WelshVarsity, so people can follow those too.”

Whilst there is a rivalry between the two universities, which has its benefits from a sporting perspective, Varsity is a celebration. A celebration of the highly talented athletes and sporting ability on show.

Spectators and competitors alike, Cardiff will ensure to be the perfect host.

“We will be looking to put on a fantastic event for both competitors and spectators this year. Whilst we welcome the competitive nature of Varsity, we hope that both sides are respectful towards each other regardless of results, and enjoy all the daytime activities the event has to offer.”

Even with Varsity commencing in early April, the excitement and anticipation has been building ever since the date was announced. Without a doubt, achieving Varsity success will be targeted by most, if not all of the Cardiff and Swansea clubs.

Will Swansea be able to redeem themselves from last year’s disappointment? or will Cardiff defend their title? The countdown to Welsh Varsity has begun!