by Reece Chambers and Olly Allen

In a decade that has included two promotions and two relegations from the Premier League, Cardiff City fans have seen it all since 2010.

Head of Sport, Reece Chambers, and Sports Editor, Olly Allen, choose their combined XI of the very best Cardiff City players from the past decade.

Kept a league-high 18 clean sheets on the way to promotion in 2013 before an incredible season in the Premier League. Marshall made 278 appearances in total for the club and took the captain’s armband in 2014.

A Cardiff icon who was also key in the Bluebirds’s first promotion, playing in 288 games across nine years at the club. Everything you want from a full-back both defensively and going forward.

Another part of the defence that conceded just 45 goals as Cardiff won the Championship. Hudson was captain that year, and won the club’s player of the season too. 164 appearances in total.

An instant hit after signing on a free as one of Neil Warnock’s first signings in 2016. Crucial at the back in 2017/18 and a hugely popular figure at the club with an infectious personality.

A tough choice at left back. But Andrew Taylor goes in having played in all eight games of the club’s run to the 12/13 League Cup final.

The only player to have key roles in both promotion winning campaigns. A tough tackler and tireless worker, Gunnarsson made 286 appearances before departing last summer, and won the Player of the Season award in 2017.

One of the few individuals to have come through Cardiff’s academy and make an impact on the first team this season, Ralls has been a consistent performer for the last five years and scored seven goals on the way to promotion in 2018.

Who else to cut in from the right flank? Whittingham’s wand of a left foot has gone down in Bluebirds history. He’s arguably the most popular Cardiff City player of the decade.

Without Camarasa, Cardiff City’s battle to stay in the Premier League would have come to an end before it even started. The Spaniard is a cut above the rest and it’s a crying shame that he’s being left on Palace’s bench.

One of the few Cardiff-born players to make a real impact in the decade. His pace and trickery coming in off the left handside has caused many problems over the years and we’d expect him to do so in this team as well.

Earning a call-up to England’s national side is a rare occasion for the majority of Championship players. But for Bothroyd it was a sign of just how much of a goalscorer he was. He gets the nod over Chopra having made more of an impact in the 2010s. 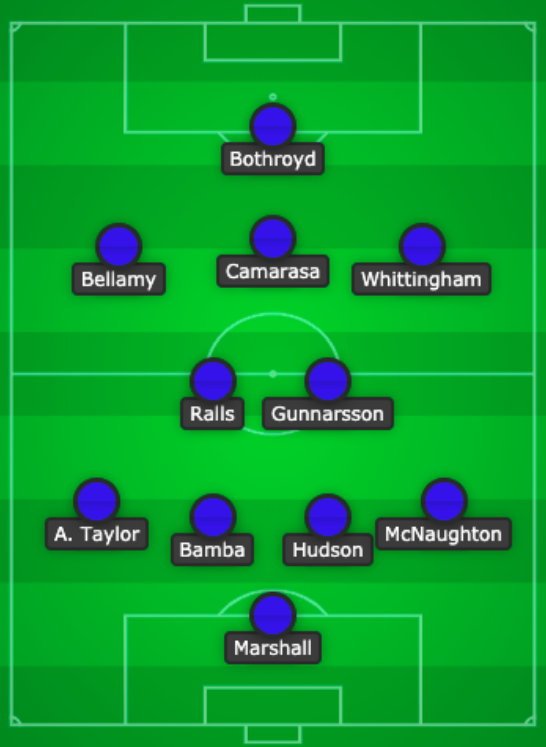