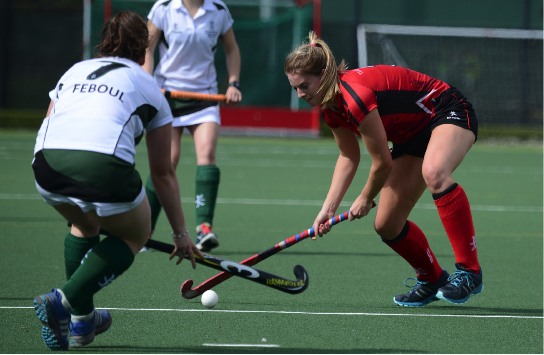 Hockey attracted one of the largest crowds of Welsh Varsity day, with each set of supporters out in force.  This made for a competitive but exhilarating atmosphere at the Welsh Institute of Sport’s Hockey Astro.

The ladies’ teams got things underway at 2pm and Cardiff dominated proceedings from the outset.  Little time was spent in Cardiff’s half and the inevitable breakthrough came after 12 minutes, courtesy of Eliza Brett.

The hosts continued to maintain dominance in both possession and territory after Brett’s goal, with the second goal finally emerging from a goal-line scrap after another 10 minutes had elapsed.

With their 2-0 advantage, Cardiff’s play became even more confident and they managed to sneak in another two goals before the end of the first half.

Facing a 4-0 deficit as the second half began, Swansea managed to recover some composure early in the second half, managing a few consistent periods of possession and denying several more Cardiff chances.

However, after only eight minutes, Cardiff extended their lead again to make it 5-0.  After this, Swansea seemed resigned to defeat, as they let in another two Cardiff goals in quick succession.

In the closing stages of the game, Cardiff took the opportunity to showcase their superior stick skills. A Rachel Dunning goal hit the backboard in the 54th minute, while the final goal of the game came just three minutes later as the home side ran riot.

With Cardiff already assured of victory, Swansea enjoyed their best period of play in the dying minutes of the game, but they were still unable to affect the score line, which stood at 9-0 to Cardiff when the final whistle blew.