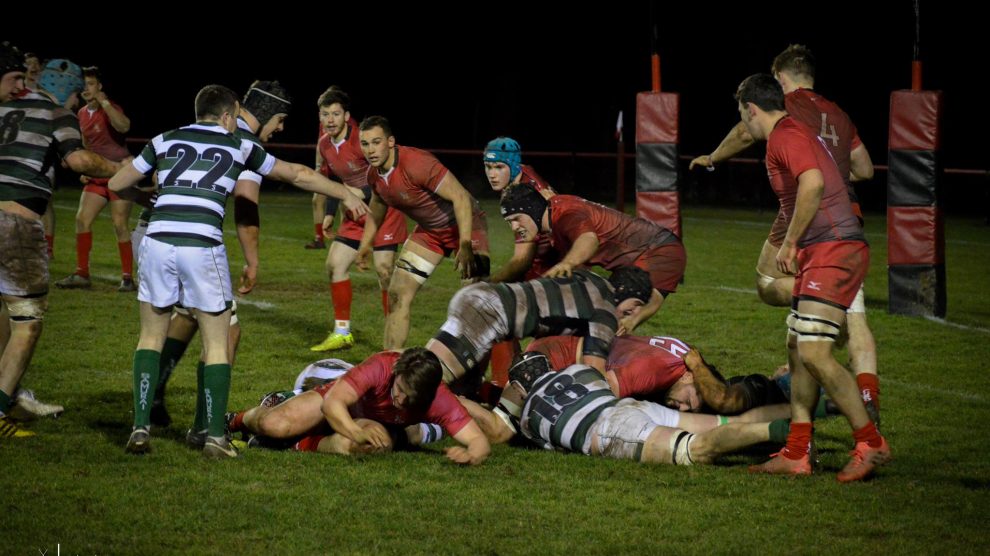 Cardiff laid down a marker ahead of Welsh Varsity 2018 as they edged a hard-fought 13-10 win over arch rivals Swansea at Llanrumney last week.

The 1st XV maintained their spot at the top of the BUCS South A table and secured a timely confidence boost before the two teams meet again at the Liberty Stadium on April 25.

Both sides scored two tries apiece, with a first-half penalty ultimately proving the difference in a valuable win ahead of the final two games of the league campaign.

Whilst it was far from a perfect, free-flowing performance from his side, captain Tom Wilson was proud of the character they displayed.

Said Wilson: “It was a scrappy game with lots of mistakes by both teams as derby matches often are.

“I thought our defence looked really strong throughout the game with boys making some really dominant collisions, however our attack didn’t really fire as we were hoping it would making it a tough game.

“The boys showed a lot of spirt and character to grind out the narrow victory in the end, which has earned us some very valuable league points going into the last couple of games for the season.”

The results sets them up perfectly for a massive few weeks with a chance to seal a league title in the run-up to the showpiece Welsh Varsity game.

Swansea have been known to bring in numerous fresh faces who rarely appear in University rugby for the big game, and it is expected this year will be no different.

But Wilson believes their two league wins over their rivals, coupled with a crushing success against the odds last year, will give them a mental edge.

“Varsity is a very different type of game being a one off event and I’m sure that they will have boys that they will bring in for the fixture,” Wilson said. “But I think beating them both home and away in the league this year puts us in a good place going in to that game with lots of confidence.

“With boys coming back from injury and a tight group of boys playing for the club it’s an exciting time for Cardiff rugby and hopefully we can demonstrate this at Varsity and put in a good performance for all.”