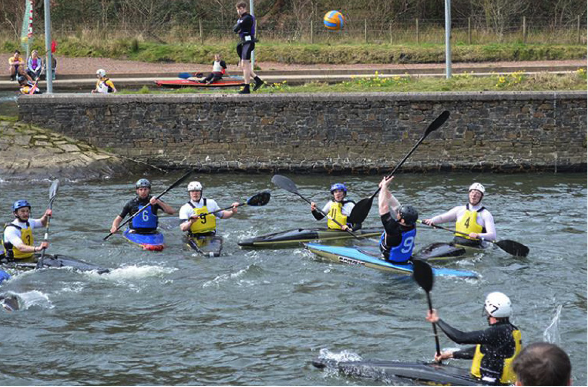 As old rivals reacquainted themselves in the key battlegrounds at the Welsh Institute of Sport, one of the day’s most engrossing conflicts took place several miles away in Cardiff Bay – the canoe polo.

Canoe polo is a rapidly expanding sport in the UK, with Britain the current world champions. Played out between teams of five players in two 10-minute halves, the sport is noted for its ferocity and skill level.

First up in the three-match series to decide the Welsh Varsity winners were the men’s ‘B’ teams, who produced an error-strewn but engaging opening contest. Despite a flood of early chances for Cardiff that led to them opening the scoring, Swansea gradually turned the tide and established a 2-1 lead by the end of the first half.

Continuous Swansea pressure throughout the second half led to a decisive third goal and, despite carving out a few chances in the closing moments, Cardiff eventually lost 3-1.

Following on from that early setback, Cardiff men’s ‘A’ team wasted no time in attacking their rivals with startling ferocity. Club captain Chris Corkill led by example throughout and was instrumental as Cardiff sailed into an early 2-0 lead. Cardiff’s superior canoe handling was obvious and they soon found a third goal.

A flowing Swansea move led to their first goal of the match, but Cardiff continued to stretch their lead to 6-1.  This could have been increased further but for some haphazard shooting.  In the throes of the match, as Swansea searched in vain for another goal, Cardiff stole the ball and streamed upfield for Corkill to tuck away a deserved seventh to seal the final score at 7-1.

And so, with the series tied precariously at 1-1, it was down to the ladies. Determined to outshine their male counterparts with some incisive early play, Cardiff were too fast across the water for Swansea and duly opened up a 2-0 lead by half time.

Following the interval, Swansea never came close to matching the intensity and accuracy of their opponents.  Cardiff bagged three more goals as the match meandered towards an inevitable 5-0 victory for the hosts.