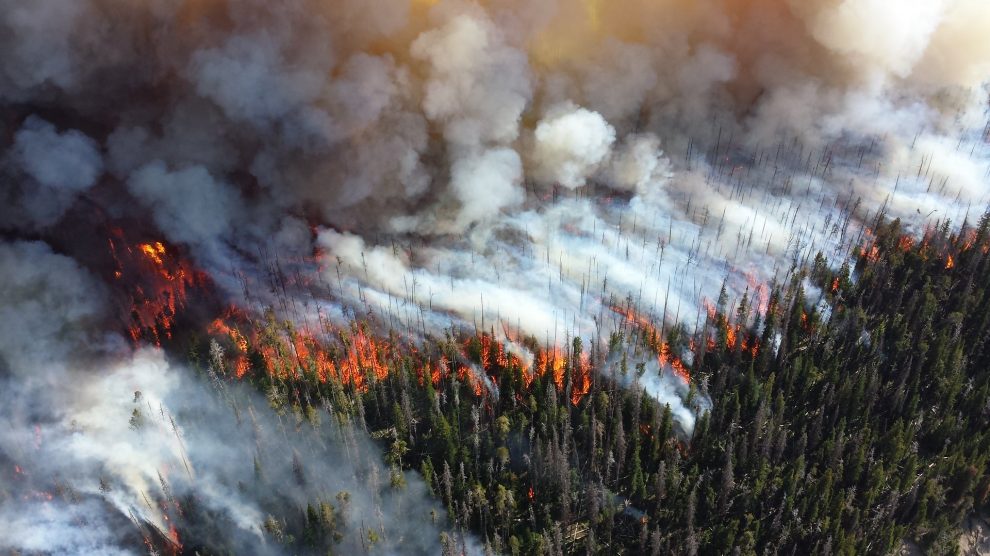 Gair Rhydd breaks down the ‘wildest’ weather occurrences over the last year and investigates the future consequences of climate change on the world at large.

As the globe continues to warm the severity and frequency of extreme weather events is increasing, Gair Rhydd took a look at the ‘wildest’ weather events that took place over the last few months and investigated what more can be done to reduce the severity of the weather.

All around the world this year wildfires, floods and storms have led to death and destruction, overwhelming public services as thousands lose their livelihoods.

Whilst it is hard to link isolated events to climate change, a pattern is emerging whereby scientists are connecting the sheer extremity of an event to human induced climate change.

A majority of climate scientists, for example, contend that although storms have remained to be a common weather-related occurrence, the levels of rainfall now being recorded are marginally higher than former levels – This, as highlighted by numerous studies, is a direct result of increasing global temperatures and rising sea levels.

Previously, discussions around climate change have addressed the prospect of future devastation but, if the events of 2021 are anything to go by, The Earth may already be seeing a dramatic shift in the severity of the weather.

With all of this mind, here is a breakdown of some of the most extreme weather-related events this year, alongside a brief look at the potential mitigation strategies that will be discussed at the upcoming 26th UN Climate Change.

Devastating floods hit Germany in July claiming the lives of over 180 people and left many missing. West Germany was left in the dark after power was lost across the region, in some cases for over a week. Cars floated around the streets as rescue services struggled to evacuate citizens trapped in their homes. This is considered the largest mass loss of life in Germany this century.

Record-breaking rainfall in the 24 hour period before the tragedy and a cold low-pressure weather system caused the floods. The river Ahr, which runs through many towns and cities, burst its bank when it could no longer absorb the excess water from the rainfall.

The big question: was the event a result of climate change? According to climate scientists, the extremity of the event would have been less in a 1.2°C cooler world. Essentially, human-caused climate change created a shocking amount of rainfall that the river could not take.

More than 3.7 million acres of forest in north-east Siberia has burnt this summer. For the first time ever, smoke from a wildfire in Russia reached the north pole.

The blaze began back in June. Residents in the Republic of Sakha (also known as Yakutia) in Siberia have been relegated to their homes as a result of thick smog which is dangerous to inhale. Some citizens have been evacuated.

In August it was announced the fires burning in Siberia were the largest in the world. The region is no stranger to wildfires, but this season is being described as the worst in living memory.

Whilst over 190 fires have been fought, a significant number of fires are being left to burn. In some places Russian civilians are fighting the fires themselves without official help. The government in Russia notoriously play down the effects of climate change.

Fires cannot always be clearly correlated with climate change, however prolonged droughts and an increase in temperature caused by global warming creates the perfect conditions for wildfires, according to scientists.

Late in August Ida hit the state of Louisiana with 150mph winds destroying anything in its path. Images of collapsed roads emerged showing cars piled up in the debris.

Homes experienced severe flooding and power was lost. Ida was classified as a ‘Category 4’ storm. A man is assumed to have been killed by an alligator in the flooding. After the man’s wife dragged him from the alligator’s mouth she went to get help. When she returned, he was gone.

The storm then moved east, hitting New York. Basement apartments flooded leaving 11 dead, including a 2-year-old boy. For years campaigners have highlighted the dangers of living in basement apartments. Flash flooding caused subway stations to be filled with water.

According to Al Jazeera, the total death toll from the storm has now gone up to at least 50 people.

On the 29th of June a temperature of 49.6°C was recorded in the village of Lytton, Canada. Inhabitants of the village were quickly evacuated before a fire destroyed their homes and livelihoods. This was the hottest day in Canada on record.

Cooling stations were set up in air conditioned venues where residents could work and sleep. Homes in the Lytton village are generally not air conditioned as the usual weather is mild.

During this period of extreme heat, the health service became overwhelmed and the number of deaths tripled the average. Most people who died were elderly and lived alone.

Scientists have since investigated if such a heatwave would have occurred without climate change caused by humans. They concluded that the global temperature increases over the last 200 years attributable to rising greenhouse gas emissions made the likelihood of an extreme heatwave 150
times more likely.

In January this year, 200 flood warnings were issued as extremely heavy rainfall swept across the U.K. The river Mersey burst its banks leading to the evacuation of people living in Manchester, Merseyside and Wrexham. Many other areas across England and Wales were severely affected.

Prime Minister Boris Johnson visited one affected area, Didsbury, warning we should be prepared for similar future events. According to the BBC the government has pledged to invest £5.2 billion in flood defences.

More intense storms can be expected as the global temperature increases. When the atmosphere is warm it can hold a greater amount of moisture leading to potentially even heavier downpours.

The Future of Weather and the Changing Climate

In recent scientific investigations, the changing climate has been linked to the increasing severity of the weather.

According to a report by the World Meteorological Organisation (WMO), “a disaster related to weather, climate or water hazard occurred every day on average over the last 50 years.” – Every day, the report continues, these disasters result in 115 deaths and a total of US $202 million in losses. Amongst a number of other findings, the report summarises that “climate change leads to more extreme weather.”

The severity of weather then, is expected to become progressively more dangerous as temperatures rise and the Earth’s climate continues to shift.

With all of this in mind, it’s critical to ask what more can be done to tackle the ongoing climate crisis and save countless lives in the process.

Moving back to WMO’s report, it highlights an important point that, as a result of “improved early warnings and disaster management,” the number of deaths in these weather events has “decreased almost three-fold.”

Over the last few years, advancements in the accuracy and availability of meteorological technology has helped provide many countries with sophisticated early warning systems against potentially hazardous weather-related events. The increased availability of this technology has proven to be especially important for Less Economically Developed Countries (LEDCs), many of which have previously struggled to implement effective systems without significant financial support.

Arnaut Rayar from France’s Ministry for Europe and Foreign Affairs has declared that, by bringing “meteorological data to exposed populations”, these systems are fundamental to saving lives and “significantly reduce the economic impact of disasters related to extreme climate events.”

In addition to these early warning systems, a number of countries remain committed to introducing and abiding by climate-based legislature.

With the 26th UN Climate Change Conference set to take place next month in Glasgow, world leaders will be meeting to outline vital new plans to prevent a global temperature increase of over 1.5°C (a target first set in Paris back in 2015) – According to a range of scientific authorities, a temperature increase greater than 1.5°C will result in more devastating weather across the world.

In order to avoid this disaster and achieve ‘Net Zero’ by 2050, therefore, a number of key countries will have to set out and abide by any plans over the course of the conference.

In a speech to the UN, Boris Johnson recently urged that the summit must bring about “substantial changes” and, critically, needs to be a “turning point for humanity.” Continuing about the focus of the event, the Prime Minister declared that he would be focusing on four key areas, including “coal, cars, cash and trees.”

For the time being, however, the upcoming summit will provide the world leaders with a chance to reflect on the ongoing climate emergency and focus on introducing new carbon-dioxide reducing legislature.

If these countries are able to effectively pool together their vast financial and scientific resources, the 26th UN Climate Change Conference has the potential to mark (as Boris Johnson claimed) a “turning point” in the fight against climate change.

Without any significant changes, however, the severity of the weather is likely to become increasingly hazardous over time. The weather and weather-related disasters will undoubtedly remain to be a salient issue