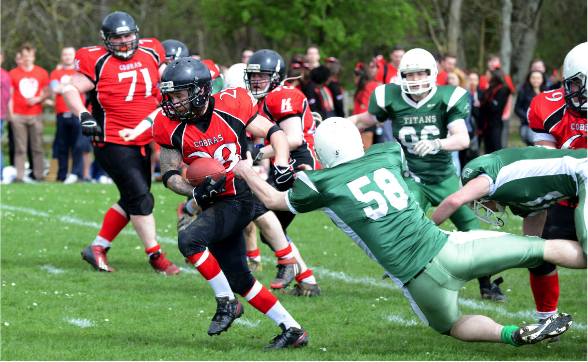 The Swansea Titans shut out the Cardiff Cobras to comfortably win the American football leg of the Welsh Varsity by a score of 27-0.

The visitors were certainly the pre-game favourites, having easily won last year’s Varsity matchup 36-14, and also having not lost a BUCS league fixture since December 1st. It quickly became clear that Swansea had every intention of continuing this good form.

On the first drive of the game, the Titans moved the chains primarily through fresher running back Jacob Ahmadi, but were also aided by Cardiff’s defence straying offside on a crucial third down. Quarterback Simon George then threw a simple hitch route in the Cardiff redzone, which was turned into a touchdown thanks to poor tackling from the hosts. Thankfully for Cardiff, this resulted in the first of four failed two-point conversion attempts.

If the Titans’ first drive was a sign of things to come, so was the Cobras’. They ran the ball on two consecutive plays – a tactic that they would continuously employ despite being behind – before the visiting defence forced and recovered a fumble on another run. Swansea’s offence stalled on the resulting possession, but good field position from the fumble allowed them to kick a field goal, extending their lead to 9-0.

Cardiff’s quarterback Chris Brinkworth endured a tough afternoon, rarely throwing and being consistently pressured when he did. His second-quarter interception was the only pick of the day from either side and it was completely at odds with his counterpart, who extended Swansea’s lead to 15-0 before halftime with a clever slant route on fourth and four from the 10-yard line.

After the break, things only got worse for the hosts, whose defence simply could not get off the field. On a fourth and eight in the third quarter, George tossed a beautiful throw to the back of the end zone, bringing yet another touchdown and missed extra point.

The fourth quarter saw Cardiff’s best offensive series with strong carrying from back Ayo Akintunde, but a dropped catch on fourth down summed up their afternoon. On the very next play, Swansea’s Jacob Ahmadi broke off a 52-yard touchdown run, only to be called back for holding by his linemen.

The visitors would score later on the drive, however, to round off a 27-0 victory.  The heavy defeat has left the Cobras with much to ponder ahead of next season.