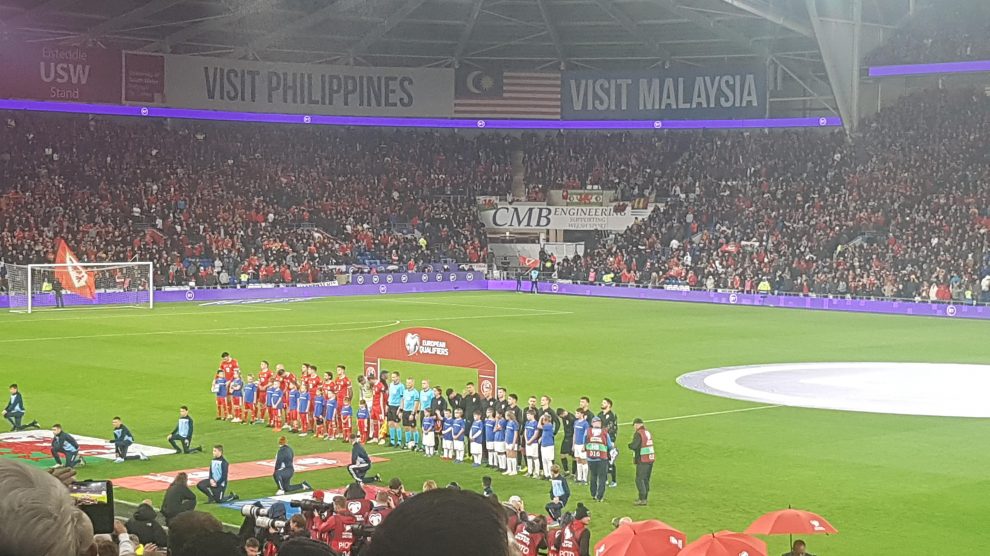 Qualification for Euro 2020 is now out of Wales’s hands despite Ryan Giggs’s side earning a 1-1 draw against Croatia on October 13. They now need to beat both Azerbaijan and Hungary next month and hope that Slovakia drop points against Croatia in order to get to the finals automatically.

That is not to say that it was a bad result at the Cardiff City Stadium, Croatia after all were World Cup finalists less than 18 months ago and have reigning Ballon d’Or winner Luka Modric in their side. Indeed, Giggs suggested that it could prove to be a “vital” point against a very talented opponent.

Nikola Vlasic had given the visitors the lead early on in the game, before Gareth Bale was Wales’s saviour once again as he equalised in first half stoppage time. Three days earlier, the team drew 1-1 with Slovakia – this time going ahead thanks to Kieffer Moore’s first international goal before being pegged back by Juraj Kucka’s volley. So what can Wales take away from what Giggs described as his “best camp” so far?

Firstly, the influence of Gareth Bale should never be understated. Against Croatia, Wales’s talisman scored his 33rd international goal in one of only two moments of quality the team showed in the game – the other being the assist from Ben Davies, the only other player in the squad playing Champions League football this season. The left-back showed endeavour to get to the ball ahead of Mateo Kovacic before being composed enough to perfectly play through Bale, who netted expertly.

Throughout the game, Wales constantly looked to find the Real Madrid man, often to his and the team’s detriment as it led to him dropping deeper than he should have been. But really who could blame him, as the hosts consistently struggled in possession, and as a result failed to create many chances.

The quality in Croatia’s midfield was clear. Even without the suspended Marcelo Brozovic, the likes of Modric, Kovacic and Ivan Rakitic continually danced around Wales as the hosts failed to hold on to the ball for long periods. But this is an ongoing issue for Giggs’s side. In only one of their six qualifiers so far, against bottom of the group Azerbaijan, have Wales had the majority of possession. Away in Slovakia they had just 30% of the ball.

It highlights just how much the team miss Aaron Ramsey, who stands alongside Bale as one of their key players. Due to injury, the 28-year-old has not played an international game since November 2018, meaning he is yet to feature in a Euro 2020 qualifier. It was hoped he may be able to play some part this month, but a recurring injury picked up at new club Juventus ruled him once more. Wales will not want to look back on this qualifying campaign and wonder what may have happened if Ramsey was fit, and they can only hope that he is available for the two crunch games next month. This is even more pertinent considering that Joe Allen will be suspended for the Azerbaijan fixture after he picked up a yellow card against Croatia.

But Wales fans may have found a new hero in Kieffer Moore. The striker has had somewhat of a journeyman club career so far, turning out for ten different teams in non-league, Norway and now the Championship. He only made his international debut in a friendly against Belarus in September, but Moore may already have become a focal point for the side. Why? Quite simply, he offers something different.

Wales have a host wingers, and in October’s squad alone you can count Gareth Bale, Dan James, Harry Wilson, Tom Lawrence and Rabbi Matondo. Add in the injured David Brooks and the out of form Ben Woodburn, and Wales perhaps have too many options out wide. Moore on the other hand is an imposing 6ft 5in striker, who acts as a target for these wingers and the midfield and creates trouble for opposition defences.

After heading home his first goal for his country against Slovakia, the 27-year-old won six aerial duels against Croatia, double that of anyone else on the pitch. “When you have someone like Kieffer, a target man, use him” said Giggs. Defenders don’t like playing against him. When he brings other players into the game, then you can play your football, you can have players running in behind, taking men on”. Croatia manager Zlatko Dalić admitted his side had spoken about Moore’s threat before the game and didn’t find it easy coming up against him. If the Barnsley man can unsettle Azerbaijan and Hungary next month, Wales will have every chance of coming away with the desired result.

Attentions will now turn to those November fixtures as nerves start to jangle. A draw against Croatia may turn out to be crucial, as it leaves Croatia themselves still needing a point to qualify, placing emphasis on their game with Slovakia, who Wales need to slip up. But first and foremost, Bale and co must focus on their own job, as an away game in Azerbaijan could be a classic banana skin, while Hungary’s visit to Cardiff could end up being a tense, pressured winner takes all encounter.