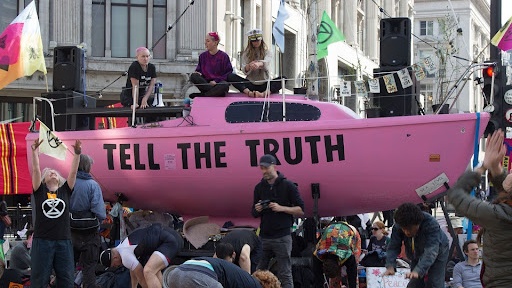 By Zoe Kramer | Head of News

Extinction Rebellion has staged a number of protests recently calling for climate action. With the COP26 conference underway, climate change is a hot button issue, and activists are making their voices heard.

Activists staged a sit-in protest at Glasgow’s Squinty Bridge on November 2nd, just yards away from the COP26 campus at the SEC. Police temporarily closed the road and diverted traffic away. One banner read “How many cops to arrest climate chaos?”

Demonstration ranged across the city, with another taking place outside the JP Morgan building on Waterloo Street.

Extinction Rebellion protesters also broke into the Exxon Mobile oil refinery in Hampshire on the 27th of October. The 15 demonstrators, including two Olympians, chained themselves to various fixtures of the refinery after cutting electric fences surrounding the area. The activists called for the government to stop fossil fuel investments as well as for Exxon Mobile to stop its expansion plans to the Fawley refinery.

Laura Baldwin and Etienne Stott, Team GB Olympians, chained themselves to a pink boat which blocked the entrance to the site. Others scaled 50 ft silos with banners reading “Climate Emergency” and “No Future in Fossil Fuels.” Another activist dressed as Boris Johnson set fire to a prop boat with the words “your children’s future” on it. Protests went on for approximately eight hours.

Baldwin told the Telegraph, “I am a deeply protective mother, moved to take direct action in a desperate bid to force this suicidal system to change in time to limit the climate crisis worsening and slipping past the point of no return.

“Watching the news this summer was horrifying and heartbreaking, witnessing catastrophic climate impacts killing people on every continent of the globe.”

Mr. Stott said, “I think it’s totally wrong that oil companies continue to put their profits ahead of everyone’s right to a future on a living planet.

“We need our government to rein in these rogue companies as a matter of urgency and show to the world ahead of COP26 that the UK is prepared to take a genuine leadership position.”

A spokesperson for Extinction Rebellion said, “ExxonMobil has known the devastating effects of fossil fuel production on the environment for over 40 years, but instead of acting responsibly on that knowledge, they’ve spent tens of millions funding climate denial and misinformation and obstructing a transition to cleaner energy sources.”

An ExxonMobil spokesperson said: “ExxonMobil believes that climate change risks warrant action and it’s going to take all of us — business, governments and consumers — to make meaningful progress.

“At Fawley, we are also directly helping motorists and farmers to reduce their emissions through the manufacturing of lower carbon fuels, and we are also producing the lubricants and chemicals that support lower emissions by use across a range of applications such as wind turbines and electric vehicles.

“Furthermore, our chemicals play a vital role in our daily lives from medical equipment, to clothing, cleaning materials and healthcare products.

“We respect the right to peaceful protest, but our priority is the safety of our people, our neighbours and our operations and we are working with Hampshire Police to ensure this is maintained.

“ExxonMobil Fawley continues to operate safely and is not experiencing any impact on production.

“We apologise to anyone from the local community or beyond experiencing any inconvenience resulting from the actions at Fawley today of this group.”

Police have confirmed that none of the group will face legal action.