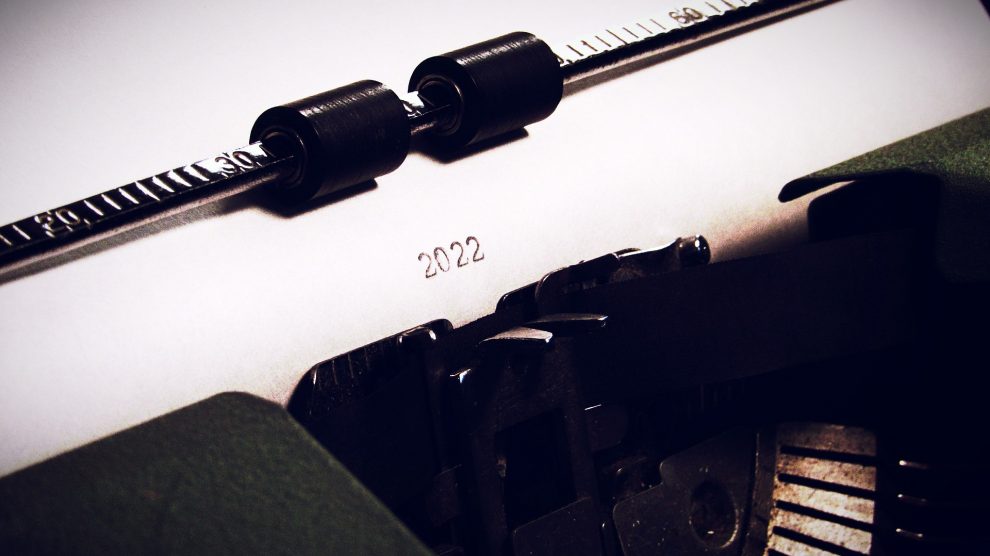 Eva Rodericks looks ahead to everything we can expect to see from the new year in the worlds of film, technology, politics, sport and much more.

Moving on from the events of 2021, the new year represents a lot of different things for people around the world. For a number of scientists, 2022 is expected to be the year that COVID-19 might lose its devastating grip on several countries as a sense of ‘normality’ begins to return.

With this expected return to ‘normality’, many people seem to have ushered in the new year with the hope that the next few months will be a considerably more positive and optimistic time than 2021.

If the last two years have taught us anything, however, it is that the future will be far from predictable and, as with COVID-19, things can become uprooted merely in a matter of weeks or even days. Even if we set aside the pandemic aside, the numerous controversial and world-shaking events that we saw in 2021 offer us a reflection back on all the ways that society as we know it continues to be undergoing rapid changes.

2022, therefore, represents a variety of different possibilities, both positive and negative alongside everything in-between.

With this in mind, Gair Rhydd took a look ahead and broke down all of the most significant events that we can expect to see from the new year in the worlds of film, technology, politics, sport and much more:

Politics and democracy in the UK

For many, one of the key questions for 2022 is whether Boris Johnson will retain his position as Prime Minister. After news of parties in Downing Street emerged at the beginning of the year, Johnson’s popularity has fallen amongst the public and is being told to resign by Labour and Conservative politicians alike. If Johnson fails to survive the so-called “partygate”, he may be replaced by Liz Truss or the chancellor, Rishi Sunak.

Last year there was much talk of “levelling up”, but what does this mean for Wales in 2022? Cash injections into ten Welsh projects have been approved, including £13.3 million for creating more tourism in the Pontcysyllte Aqueduct World Heritage site, just south of Wrexham, and £10.3 million to revamp Aberystwyth’s old college, harbour and promenade. However, Welsh Labour, Welsh Liberal Democrats and Plaid Cymru have their issues with the levelling up scheme. Ultimately, Wales will now miss out on their EU money, amounting to around £375 million a year, which was directed straight into the poorest communities.

The U.K government plans to replace this money with £2.6 billion through the shared prosperity fund. The Welsh government says that even with this money, Wales will still be one billion pounds poorer by 2024. Welsh Labour Ministers are critical of spending decisions for Wales being made in Westminster, without properly consulting the Welsh government.

What blockbuster and arthouse films are releasing in 2022?

With the delays caused as the result of the pandemic, 2022 is expected to be a year where studios are eager to get people back to the cinema.

For fans of the original Avatar film, saying that the upcoming sequel is ‘long anticipated’ would be an understatement. The film was initially due for release in 2014 but writer and director James Cameron’s notorious perfectionism (and the COVID-19 pandemic) has caused several delays. The Guardian’s film critic, Mike McCahill, says he’s ‘in that minority who are still curious to see what “Avatar 2” will bring’. The release is now set for December 2022.

The highly acclaimed original Avatar follows Jake Sully, a paraplegic marine, who takes on the mission of infiltrating the magical world of Pandora. This idyllic place is inhabited by Na’vis, humanoid aliens, who the military are trying to displace in order to access precious minerals. Jake embodies a Na’vi and finds himself in a predicament – who should he serve?

Touching on environmental disaster and western greed, accompanied by ground-breaking CGI and incredible visuals, there are high hopes for the sequel of Avatar. Terminator star, Sam Worthington, will be returning as Jake Sully.

Marvel is returning to the world of Wakanda once again but sadly without the late Chadwick Boseman, who played T’challa. The actor and director tragically lost his battle with cancer in 2020 aged 43. It has been confirmed that T’challa will not be recast for the sequel. Plot details are still hazy but expect to see breath-taking scenes as the film explores another secret civilisation, the underwater world of Atlantis. Just like Wakanda, Atlantis is also technologically advanced – maybe, we will see a battle between the two?

After lead actress Letitia Wright was injured on set, the release date has been pushed back to November 2022.

‘I Wanna Dance With Somebody’

Finally, the tragic life of iconic singer Whitney Houston is being made into a film for the big screen. Taking on the mammoth lead role is award-winning actress Naomi Ackie, best known for playing Bonnie in End of the F***ing
World. Houston wrote some of the biggest hits of the 80s and 90s including “I Will Always Love You”, “How Will I know” and, of course, “I Wanna Dance With Somebody”. Whitney’s life seemed glamorous on the surface but, behind closed doors, she struggled with drugs and depression.

Bohemian Rhapsody was arguably the most successful biopic of the last century, winning numerous awards and capturing the hearts of the nation. The man behind the script, Anthony McCarten, will also be writing I wanna
Dance With Somebody, so it’s safe to say expectations are high. I Wanna Dance With Somebody is due for release in December 2022.

‘The Worst Person in the World’

Mike McCahill, a seasoned film critic, says there are many niche film productions to be excited about this year. He recommends The Worst Person in the World, “a really smart, involving and moving portrait of a confused woman in her twenties” which is coming out in March.

McCahill also suggests Playground, “a Belgian drama that sticks the camera on the shoulder of a young girl entering primary school for the first time and watches as her classmates declare the pre-teen equivalent of open warfare on one another, and her”. This gripping production will be available from April.

The space race is taking on a whole new meaning in 2022; Musk, Bezos and Branson are now fighting to expand their world-dominating empires by selling joy rides to space, potentially one day to the moon. As India tries to establish itself as a strong world power, they plan to send the Chandrayaan-3 Lander, a robotic rover, to the moon in 2022.

The changing world of work and business

Students who enrolled at university before 2020 never dreamt of taking on a virtual internship or graduate role but now it’s looking pretty likely. According to Deloitte, 42% of people are hoping to work from home at least twice a week, however, younger people are less keen and many are suffering from “zoom fatigue”.

The pandemic forced millions to work online yet many have warmed to the idea. Some reported benefits include a better work-life balance, less time and money spent on commuting and, from a business perspective, less money spent on renting workspaces.

But what are the downsides? Some find working from home lonely and tedious, and others say working as a team is easier in person. Perhaps unsurprisingly, Zuckerberg’s Metaverse has hopped on the trend by creating Horizon Workrooms, VR breakout spaces where users can share their screen, send messages, lead meetings and much more. This platform is expected to expand considerably in 2022 according to industry experts.

Throughout 2022, there are also a number of sporting events scheduled to illuminate the achievements of some of the finest sporting talent from around the world.

Despite years of corruption allegations, the 2022 World Cup will be taking place in Qatar. Sweltering temperatures of over 40 degrees Celsius in the summer means the sporting event will start in the winter, with the final to take place on the 18th of December.

Wales will have to beat Austria in March to reach the play-off final, where they will take on either Scotland or Ukraine. England has already qualified after winning their group. Will football finally come home for England? It’s hard to say. France and Brazil are the favourites, with England following close behind. After coming so close to silverware in the last two major tournaments, manager Gareth Southgate will be desperate to lead his team to become world champions.

Last year Wales narrowly missed out on victory when they were beaten by France 32-30 in the final. Once again, France are the favourites – but that is not to say Wales and England aren’t looking strong. Be ready for crowds in Cardiff Central on the 5th February when the dragons take on Ireland at the Principality Stadium and later in the month when they face Scotland.

After various accusations of human rights abuses levelled at the Chinese government, the UK, US, Australia, Lithuania and Kosovo have announced they will be diplomatically boycotting the games. China will be the first country to have held both the summer and winter Olympics.

Norway, Germany and Canada look set to top the medal board, closely followed by the US and Olympic Athletes from Russia. Jamaica will be taking part in the bobsleigh competition for the first time since 1998. The Jamaican bobsleigh team trained at the University of Bath and have even been seen pushing a mini cooper around Peterborough when their training facilities were closed.

Sports analyst, James Geaves, predicts Manchester City will win the league, Liverpool will come second, followed by Chelsea then West Ham. If West Ham can secure a top-four position, they will be in the champions league for the first time.

Geaves also suggests that this is looking to be a good year for women’s sports, with more money and sponsorships to be injected into the female space than usual.