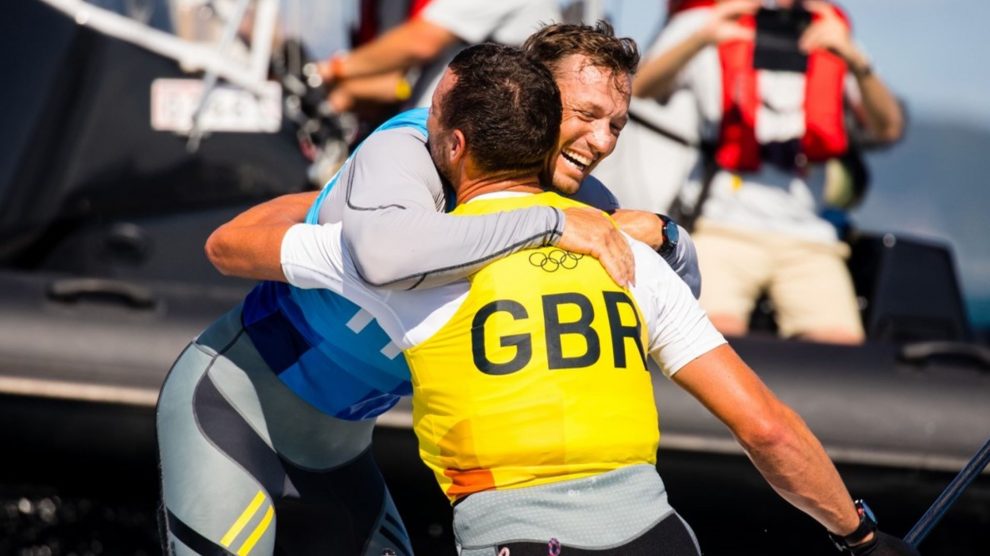 The second week of the Tokyo Olympics saw plenty of opportunities for Team GB to add to their already impressive medal tally, as reliable medal winning events such as cycling, equestrian and sailing came to their conclusions.

Team GB had originally been predicted and targeting medals in the low fifties and, as of the end of day 9 of the 2020 Olympics, sat on a total of thirty-five total medals, and so were on track to achieve, or perhaps exceed this estimate.

This week at the 2020 Olympics began with a landmark moment in the equestrian team eventing, as a team of Oliver Townend, Tom McEwen and Laura Collett claimed GB’s first gold medal in the event since 1972. Horse riding continued to be successful on that day as Tom McEwen rode into silver medal position in the individual competition.

Perhaps the biggest moment of history for GB, however, came in the women’s weightlifting +87kg category, where Emily Campbell became the first British female to win an Olympic medal in the sport. She sat fourth after a lift of 122kg in the snatch but produced a highly impressive lift in the clean and jerk of 161kg to finish second.

The event was also monumental with the controversial inclusion of Laurel Hubbard, for New Zealand, who became the first ever transgender athlete to compete in a different gender category to the one in which they were born at the Olympics. This has led to intense debate about the inclusion of transgender athletes in traditional gender categories in sport, with discussions about the future of transgender inclusion sure to continue long into the future following these games.

Winning medals in sailing has become somewhat of a formality for Britain in recent Olympics, particularly with the success of sailors such as Sir Ben Ainslie. Day eleven in Tokyo, though, brought about an impressive haul even by British standards.

Giles Scott, the gold medal winner in Rio, defended his title in the men’s Finn class to claim top spot in Tokyo. In the men’s 49er competition, it was a second gold of the day for Stuart Bithell and Dylan Fletcher, narrowly beating Germany by winning the medals race. There was also a second-place finish for John Gimson and Anna Burnet, who claimed silver in the Mixed Nacra 17 division.

On the track, Kelly Hodgkinson claimed the silver medal in the women’s 800m final, with teammate Jemma Reekie just missing out in fourth. It was disappointment, however, for Adam Gemili, as he pulled up in his 200m heat with a hamstring injury, ending his hopes of a medal.

In the velodrome, it was yet more Olympic success for Jason Kenny as, alongside teammates Jack Carlin and Ryan Owens, he claimed men’s team sprint silver, bringing him level with Sir Chris Hoy as GB’s joint-most decorated Olympian of all time. There was also a silver medal for the women’s team in the team pursuit final, as Katie Archibald, Laura Kenny, Josie Wright and Neah Evans finished second to a mightily impressive German team, who set a new world record for the third time at these 2020 Olympics.

Boxer Pat McCormack added to the silver medal count with his loss to Cuba’s Roniel Iglesias in the men’s welterweight final. In other bouts, Galal Yafai progressed to the semi-finals of the men’s flyweight competition, while Caroline Dubois’ search for a medal met its end in the quarterfinals to Thailand’s Sudaporn Seesondee.

Finally, in the diving pool, Jack Laugher added to his medal in Rio 2016 with bronze in the men’s 3m springboard, losing out to the Chinese pair of Xie Siyi in 1st and Wang Zongyuan in 2nd.

It isn’t often that a bronze medal is one of the most impressive of an Olympics for GB, but in the case of Sky Brown there was an exception.

The skateboarder, aged just 13 years and 23 days, claimed bronze in the inaugural park skateboarding event to become the youngest Team GB medallist of all time. Perhaps even more impressive was that she did this after recovering from a horrific fall in training, leaving her with apparent skull fractures.

To add to how impressive this young competitor is, she stated she also plans to aim to compete in the Paris 2024 surfing competition as well as the skateboarding, so keep an eye out for her at the next Games!

There was yet more success to come in the sailing on day twelve, as the team of Hannah Mills, the GB flagbearer at the opening ceremony, and Eilidh McIntyre won gold in the 470 women class, coming 5th in the medals race to hold off fierce competition from the Polish team.

Ben Maher, on board horse Explosion W, won individual show jumping gold by 17 hundredths of a second, adding to an impressive Games for the GB equestrian team.

The boxing ring was the scene of two more medals gained for Team GB. Veteran Fraser Clarke won bronze in the men’s super-heavyweight division, after his fight with Uzbekistan’s Bakhodir Jalolov was called off due to a cut in Clarke’s eye from his semi-final fight.

Ben Whittaker, in the men’s light heavyweight gold medal fight, lost out to Cuba’s Arlen Lopez, and caused controversy by refusing to wear his medal at the medal ceremony, claiming that he ‘lost gold’ and therefore didn’t want to celebrate his silver medal.

There was disappointment in the athletics as heptathlete, and gold medal favourite, Katarina Johnson-Thompson pulled up in her 200m event due to a recurring Achilles-heel injury. ‘KJT’ showed great determination in getting back up and limping to the end of the race, only to be disqualified anyway for leaving her lane.

The medals continued to come from the velodrome on day thirteen of the 2020 Olympics, as Olympic debutant Matt Walls won the men’s omnium event with a score of 153 points. This was the first team GB gold in cycling at these Olympics, adding to the silvers already won in other events.

In athletics, Holly Bradshaw claimed Team GB’s first ever pole vault Olympic medal, taking bronze in the women’s event at a height of 4.85m, losing out to Katie Nageotte of the USA and Anzhelika Sidorova of the Russian Olympic Committee.

Liam Heath, gold medallist in Rio, set the fastest time in his men’s kayak 200m semi-final, and went on to finish third and claim bronze for GB in the final.

Galal Yafai also progressed to the men’s flyweight final, beating Saken Bibossinov of Kazakhstan in the semi-finals, securing at least a silver medal.

Day fourteen at the Tokyo 2020 Olympics went on to become coined as ‘Ladies’ Day’ by some commentators, as women across multiple events claimed medals.

Perhaps the most notable of these medals once again came in cycling. Laura Kenny and Katie Archibald formed a formidable team in the women’s Madison in the event’s debut at the Olympics, dominating the race from start to finish to claim a strong gold for GB. This gold medal made Laura Kenny the first British woman to ever win gold at three separate Olympic Games. There was also success for Jack Carlin in the men’s sprint, as he claimed bronze after beating the ROC’s Denis Dmitriev in two straight races.

There was also a gold medal won by a female athlete in the modern pentathlon, as Kate French went from 5th to gold medal place in the laser run event to claim top spot. GB’s women have a history of success in this event, with a medal at every games except Rio 2016 since the event was reinstated in 2000.

GB’s women’s hockey team claimed a bronze medal finish as they beat India 4-3 in their bronze medal match. The result was seen by some as a disappointment after the stunning gold medal in Rio, but there have been many changes to the squad in the past 5 years with many of the 2016 players no longer involved.

In athletics, GB’s men’s 4x100m relay team sealed their first podium finish since Athens 2004 with silver in the final, while the women’s team claimed bronze, matching their result at the Rio 2016 Olympics. There was also long-awaited success for Laura Muir, who won silver in the 1500m to claim her first Olympic medal and her first ever outdoor international medal.

The last full day of the 2020 Olympics brought with it yet more opportunity for British success and medals.

In the boxing, Galal Yafai claimed Britain’s first boxing gold in Tokyo by beating Carlo Palaam of the Philippines in the men’s flyweight final, flooring his opponent in the first round and eventually being crowned champion 4-1 in a split decision.

British sporting (and knitting!) icon Tom Daley claimed his second medal of the Games with bronze in the men’s 10m platform final, adding to his gold won alongside Matty Lee in the synchronised event to become GB’s most decorated diver in Olympic history.

It was a clean sweep of golds in the modern pentathlon as Joseph Choong won GB’s first ever men’s individual medal in the event, holding off a late challenge from Egypt’s Ahmed Elgendy in the laser run to join Kate French as a gold medal winning pentathlete.

Matt Walls and Ethan Hayter took the silver medal in the men’s Madison, producing a brilliant comeback in the final sprint to claim second spot, winning Walls his second medal of these Games. Jason Kenn and Jack Carlin both progressed to the quarterfinals of the men’s keirin, while Katy Marchant narrowly lost out to Hong Kong’s Lee Wai-sze in the quarterfinals of the women’s individual sprint.

Finally, in athletics, Josh Kerr produced a highly impressive surge in the final lap of the men’s 1500m to claim bronze in a personal best time of 3:29:05, nearly overtaking veteran Timothy Cheruiyot on the line to claim silver, as Jacob Ingebrigtsen claimed a stunning gold in Olympic record time.

The closing day of the 2020 Olympic games saw two more opportunities for Britain to round off another successful games.

Lauren Price became the only female boxer for GB other than Nicola Adams to win gold for Great Britain, as she defeated China’s Li Qian by unanimous decision in the middleweight final.

However, the key moment of the day, and perhaps one of the defining moments of the entire Olympics for GB, came in the men’s keirin in the velodrome. Jason Kenny shocked the other riders by pushing off as soon as the durney had left the track (a tactic not often used by riders), in order to lead from the front and claim gold in GB’s last event of the Tokyo Olympics. This gold medal, Kenny’s seventh in total, alongside his 2 silvers, made him Team GB’s most decorated Olympian of all time, overtaking fellow cyclist and GB hero Sir Chris Hoy in doing so, solidifying his place in cycling, sport, and British history.

The Current Medal Standings at the Tokyo 2020 Olympics: 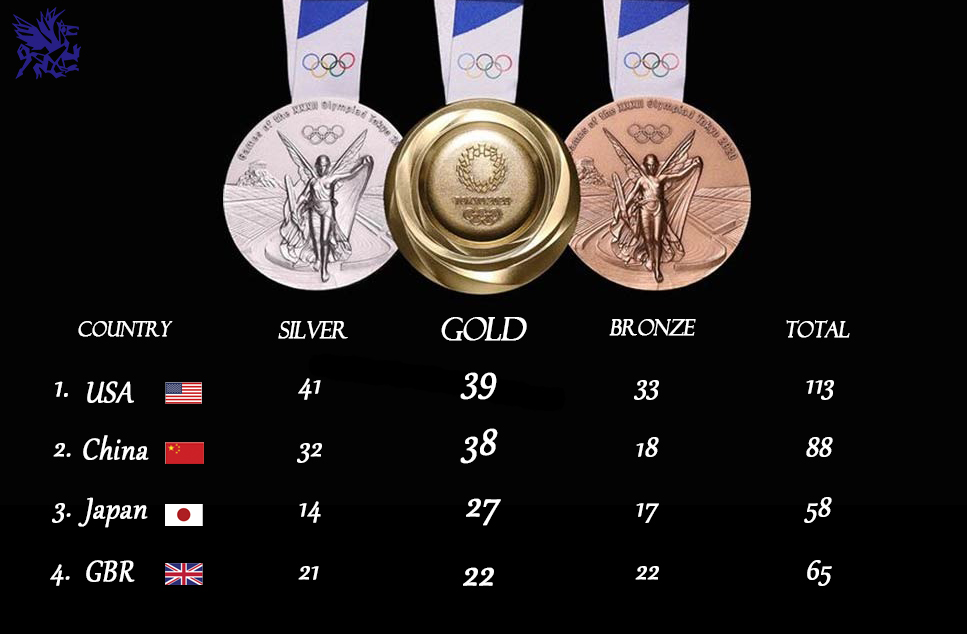