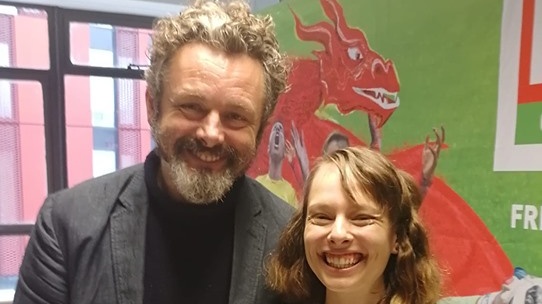 You might have noticed Bute Park is currently being transformed into a playing field. Specifically, into a football pitch for the upcoming seventeenth edition of the Homeless World Cup. The Homeless World cup is a charity football tournament, now with 49 nations competing in the men’s/mixed and women’s annual games. Based on a concept thought up by Mel Young and Harold Schmied in 2001, the first tournament took place in Graz, Austria in 2003, and has since gone from being a biannual event to being hosted every year. The Welsh band Buzzard Buzzard Buzzard recently launched the official Homeless World Cup song, called ‘Daffodil Hill’, as this year Cardiff hosts the tournament after a bid led by actor and activist Michael Sheen. Gair Rhydd was fortunate enough to be able to sit down with Michael to discuss the upcoming competition.

What made you get involved in the Homeless World Cup?

The first thing I got involved with was an organisation called Street Football Wales, who were based in the Swansea area, but they look after the whole of Wales. They are a sort of grassroot organisation that organise football games, teams and tournaments for people who experienced or are experiencing homelessness or some form of social exclusion. So, it might be asylum seekers, might be women who are in a women’s shelter because of domestic violence, it could be people dealing with drug and alcohol issues, all kinds of different complex needs and they use football as a tool to engage with those people who have been marginalised.

So, I was doing a thing called Soccer Aid, which raises money for UNICEF and a big football match, which now happens every year between an England team and a Rest of the World [team] and I was captain of the Rest of the World team for many years. I was doing that and then Kerry from Street Football Wales came and met with me to talk to me about Street Football Wales and to ask if I would get involved. My first reaction was “Why are you spending money and time and energy on creating football things for people with homelessness, why not just deal with homelessness?”. Then I saw the work they were doing and I realised that the football is the hook, the football is the thing that brings people in and that breaks down the barriers and gets you access to people that might be very difficult to reach otherwise. They come for a bit of a kick about, to play football, then they start making social connections with people. You know a lot of these people have been dealing with a lot of isolation and a lot of exclusion so building a social network can be really important. You [the players] can also start to get a bit of motivation around health and wellbeing since you want to be able to play in the match, start having a bit of self-confidence, become a member of a team, and you can get access to services that might be very difficult to reach otherwise.

I saw the difference it was making to people, and then I found out that every year there’s a Homeless World Cup tournament that takes place in a different country each year. So, we bid to host the Homeless World Cup. I went to the Homeless World Cup the first time in Oslo a few years back and I travelled with the Welsh teams and so I saw how brilliant this event is with people who have maybe never travelled outside their own country before. And now they are in a foreign country, representing their own country, wearing that jersey and that makes a big difference to people. Not only are they not having to deal with stigma or judgement like they might have been for a long time, they are now actually representing their country, their homeland. The point is, the things they’ve been dealing with for a long time, feeling on the outside, feeling not included, the act of being able to represent your country, just cuts through all of that. And it doesn’t matter if you are a professional footballer or someone who has been dealing with living rough on the streets, that [representing ones country] matters, it becomes a motivating factor for a lot of people, and I saw that happen when I went to the Homeless World Cup.

I was sitting there, talking to one of the women, and she’s telling me about how she hasn’t seen her children for a very long time, the addiction issues she was dealing with right at that moment, how she’s been in prison and when she got out, homeless for the last four years, and then I watched her go down on the pitch and score her first goal ever. Not just for Wales, ever. But she scored it for her own country and seeing the effects of that…. and after that seeing what it changed in her life. Now she does have a relationship with her children again, she’s working on creating an all-female car washing company here in Cardiff, and it’s amazing what taking part in that event has done for her and could potentially for others too.

Everyone can only take part once, because they want to make sure that as many people as possible can have the experience. So, it is a unique opportunity for the players but also for the host nation. At the heart of everything for me is ‘what is the legacy for this, what happens after the tournament’. It’s what happens afterwards that’s most important, the platform and the focus that this can give to Cardiff, to Wales, to deal and engage with these issues in a different way.

What is the one thing you wish people understand about homelessness?

I think there’s a couple of things. One is this idea that there’s this group of them over there, that the people who deal with these issues are other and that there is some sort of deserving poor and then there’s the undeserving poor. [I want] to break that [idea] down. That in fact it’s not a fixed group of people that this affects, it’s a very fluid thing, it’s about us as a community. There are times when people are at risk of falling through the safety nets and [it’s about] what do we do about that, how do we relate to that as a community and that it’s not a level playing field. Some people are more around these issues than others and that is not necessarily through any fault of their own.

Also, it’s the idea that homelessness is about just looking at the crisis point, the emergency point. What tends to happen is that we have people who are on the streets, living in tents on the high street and the idea that there’s emergency accommodation for them. So even if they can’t have full time accommodation, there’s emergency accommodation. But a lot of people are scared to go there, because they think it could be dangerous to be in emergency accommodation. I would like to see more preventative measures. You look at the statistics of young people coming out of the care system and becoming homeless, it’s shocking. So, giving them support further down the stream would be really useful. [For] people coming out of prison, out of the military, or going into schools and looking at the young people who might be at risk of becoming homeless and giving them support earlier rather than waiting until it becomes a problem, more expensive and then not giving them the support anyway.

So, you are trying to highlight the issue [of homelessness] and also how other homeless people, who are not participating would benefit from the World Cup as well?

I think the Homeless World Cup itself is whatever each country wants to do with it, I don’t think it has necessarily in the past been needed to specifically highlight the issue. But what we wanted to do with this particular Homeless World Cup was to try and make the most of this platform in order to engage with the issues, to be able to tell a different story about homelessness and the people who experience it. [We wanted to] break down the idea that there’s this group of people over there that it happens to, that in fact everybody goes through difficult times, everyone goes through times when life makes you very vulnerable and that everyone deserves support. And to bring everyone who is working on these issues anyway together, with a new kind of focus that this event can bring.

You were talking about preventative measures the government can enact, but what can the average citizen do to combat homelessness?

Well one of the things that everyone will experience is you’re walking down the street, there’s someone sitting there, clearly homeless, and there’s that panic of ‘what do I do’. You think ‘I’m a good person, I want to help, but I’ve been told you shouldn’t give them money because they’ll just use it to take drugs’. I would say that the key to it is engagement. Now, it might be that the best way to engage in that moment is to just go up and have a conversation with someone, but it might happen that the person you go up to have a conversation with doesn’t want to have a conversation with you. But you know it’s just two citizens, two people, so all the usual things apply. If you decide as a private citizen to not give money to another private citizen, that fine, there is no right or wrong. But if you genuinely want to help in some way, then don’t let not giving someone money be a reason to just ignore the problem. Don’t let that be your switch off, as soon as you walk away and don’t see that person anymore. In either way, still try and engage with the context, the bigger picture. Who are the support organisations, what can you do to help them?

There are these amazing organisations like Llamau for instance here in Cardiff, who deal with young people and women who are homeless, there’s organisations like Dewis, there’s all kinds of organisations. Look at what the kind of infrastructure around these issues is and see, do you want to volunteer, can you donate money, can you find out a bit. A part of my journey of all of this was going and talking to people, finding out what the actual issues are and what the challenges are and asking the people who are the experts on this; so go and find out, talk to them. Instead of feeling the difficulties and being confused about it and then doing whatever it takes to switch off, turn into it, lean into it and find out how you can engage in an effective way. Because you are right, every single individual person has the ability to be effective about this in some way. So just engage, take the first step.