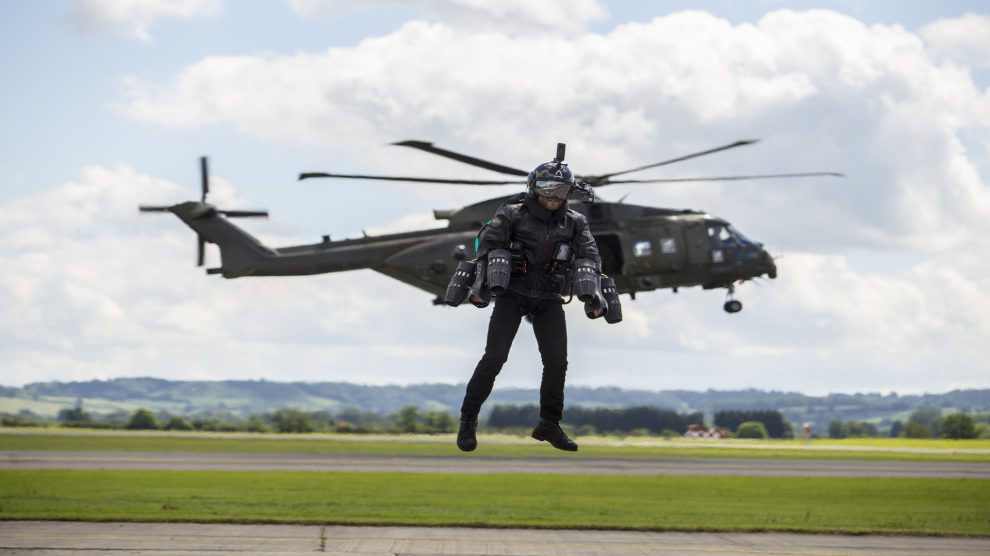 The Wiltshire-based start-up present their vision for the future of first responders with the world's first Jet Suit paramedic test flight.

As the outcome of a year-long discussion between Gravity Industries and the Great North Air Ambulance Service (GNAAS), the recent test was conducted between the Langdale Pikes and The Band, the 4th highest peak in the Lake District. The founder of Gravity Industries, Richard Browning, flew distance of over three miles using a ‘Jet Suit’ and touched-down at the simulated casualty site within 90 seconds – completing the same distance by foot would have taken approximately 25 minutes, a significantly long time in a medical emergency.

Gravity Industries, the Wiltshire-based human aviation start-up company, was launched back in 2017 shortly after demonstrating its ‘Gravity Flying Jet Suit’ design (designated as the ‘Daedalus’) via the online video-sharing platform, YouTube. Alongside the development of its patented personal aviation technology, the company has begun experimenting with the future applications of its technology and has engaged in a new, exciting opportunity with GNAAS.

Operating across the North-East, Cumbria and North Yorkshire, the Great North Air Ambulance Service (GNAAS) responds to more than 1,500 emergency call-out annually with its fleet of helicopters and rapid response cars. As a result of the Lake District’s harsh terrain, responding to emergencies remains to be difficult and highly expensive for the non-NHS-funded charity without assistance.

Following the demonstration of Gravity’s Jet Suit, Andy Mawson, the Director of operations at GNAAS, concluded that the “technology could enable our team to reach some patients much quicker than ever before” and, in addition, has a “relatively small geographical footprint of the Lakes”. Mawson, a Senior Aircrew Paramedic with over 20 years of experience, also noted that while existing “aircraft will remain a vital part of the emergency response in this terrain”, it is still “important to still push the boundaries” with “something completely new”.

Following the vast media attention and investment received in 2017, Gravity Industries has continued to increase the efficiency and wider appeal of its Jet Suit technology with aspirations to enter its unique design into multiple different industrial sectors.

Gravity’s 3D printed, Jet Suit design is composed of five miniature micro gas turbines which function similarly to the jet engines onboard most commercial aircraft, providing propulsion by drawing in air and injecting fuel (kerosene) into it as it leaves the exhaust. Fastened to the pilot with a light-weight harness, the device can travel at speeds up to 80mph and, provided that it is safe to do so, is capable of reaching an altitude of 12,000ft.

Apart from the aforementioned use as first response equipment in rural medical emergencies, the ‘Daedalus’ has received some attention from the military, including the US and French armed forces, who recognize the device’s potential use in international conflicts. Furthermore, Browning has raised the prospect of ‘Jet Suit Racing’ events which, although previously scheduled to take place in Bermuda in March, are currently on hold during the presence of COVID-19.

Richard Browning, Chief Test Pilot in the recent Cumbria-based trial, expressed his thanks for the cooperation with the team at GNAAS and regarded the test as ‘snapshot’ exploring “the capabilities of the Gravity Jet Suit in an emergency response simulation”. Speaking on the technology’s future applications, Browning highlighted that “emergency response is one of the areas Gravity are actively pursuing” however, with the ‘Daedalus’ currently in an early stage of development, the company “are just scratching the surface in terms of what is possible to achieve with our technology”.

While Gravity Industries continues to develop on its patented Jet Suit design, personal aviation technology is set to becoming an increasingly accessible means of transportation and entertainment as companies seek to capitalize on its potential future applications.