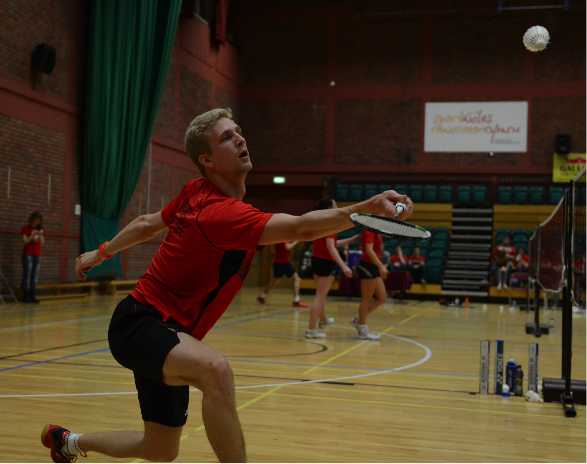 Cardiff University Badminton Club retained the bragging rights over their South Wales rivals in style after demolishing Swansea in both the men’s and women’s Varsity events.

In the women’s badminton, Cardiff started well, with Hannah Littlecott producing comprehensive wins against Swansea’s Jemima Chectham and Alex Johnson shortly after, but the elation was short-lived as Swansea clawed themselves back into the tie with Ttophi and Miles overcoming Cardiff’s doubles pairing of Chuang and Mahy 10-21 11-21.

Caitlin Gilmour put Cardiff back on track with an impressive 21-6 21-3 win over Chectham followed by a resounding 21-0 21-4 win over Swansea’s Johnson.

Although Cardiff’s men won in an even more convincing fashion than the women, the matches were not devoid of drama.

Cardiff started out well in the men’s event, with Nick Ward beating Swansea’s Chris McMullah 21-1 21-12 and Oliver Digby beating David Richardson in a three-game thriller 20-22 21-8 21-14. Wu and Klanczowsk were able to emulate their teammates success when they beat Evans and Yin 21-16 18-21 21-19, but when Bowen and Wai Lim lost to Swansea’s Victor and Ho, Cardiff stumbled.

Swansea’s momentum was quickly upset, however, as a change in venue had to take place in order to allow the netball to continue on schedule due to previous events overrunning.

This allowed Cardiff to catch their breath and steady the ship, and the men ran out worthy winners as they lost only one more match in the process.