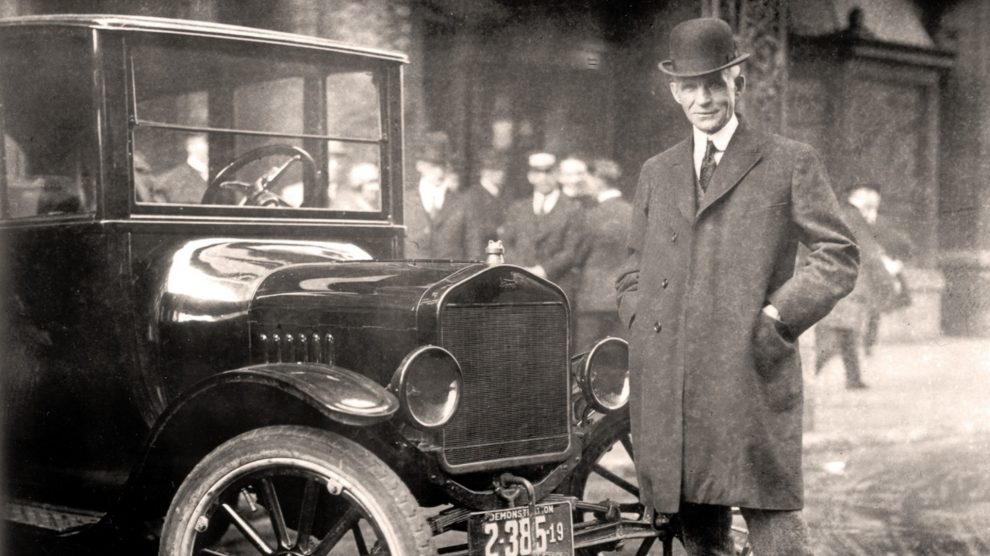 As a pioneering figure in the development of the US automobile industry, Henry Ford is perhaps best known for making cars accessible to the masses and for founding the multinational American car giant, the Ford Motor Company, back in the nineteen-hundreds. Whilst he is often incorrectly accredited as the inventor of the modern car (actually created by Karl Benz in 1886), Ford’s idea to construct vehicles along a constantly moving production line has now become fundamental to modern manufacturing methods around the world.

Born in rural Michigan in 1863, Ford grew up immersed in life on his family’s farm and, while working closely with steam-driven farming equipment, demonstrated an early curiosity for how these machines worked.

Over time, Ford became highly knowledgeable on a variety of mechanisms and found early employment as a steam engine repairman, and later as the Chief Engineer at the Edison Illuminating Company in Detroit. At the time, this nearby city was undergoing rapid industrialization and, with the widespread use of steamboats to transport goods to the Western frontier, attracted engineers like Ford with the promise of numerous well-played jobs.

Shortly after learning about Nikolaus Otto’s creation of the gas engine in a European magazine, Ford began investing almost all of his spare time and money into experimenting on gas (or ‘internal combustion’) engines. Ford intended to replicate this device for himself and, following almost three years of independent experimentation, he created a primitive horseless carriage, the four-wheeled ‘Quadricycle’.

The ‘Quadricycle’ drew the attention of several notable investors and, several iterations of the vehicle later, Ford founded the Detroit Automobile company (which would later become the luxury car manufacturer Cadillac) alongside other members of the Detroit elite and attempted to produce delivery wagons for businesses in the city.

Whilst Henry Ford was eventually ousted from the company due to slow production rates, his musings on failure as “only the opportunity more intelligently to begin anew” subsequently drove him to create the Ford Motor Company.

Now intending to create a new line of vehicles designed for the average person, Ford eventually found success with the accessibly priced Model T, his twentieth design for a car. The car initially took an average of twelve hours to fully assemble but, as Ford continued with his philosophy that “nothing is particularly hard if you divide it into small jobs”, the manufacturing process would become increasingly streamlined over the next decade.

Henry Ford drew a lot of inspiration from a visit to a prominent Slaughterhouse in Chicago, where the animal carcasses were slowly disassembled as they moved through the facility. Ford’s own production line, regarded as the first continuously moving assembly line, operated in reverse and pulled the components past various workstations using a strong rope (later replaced by a metal chain in 1914). Stationary workers would then be able to assemble the parts in a much faster fashion, rapidly increasing the rate that cars (most notably the Model T) were produced.

This is perhaps the most pivotal development to the growth of the Ford Motor Company and, just four years after Ford had begun to implement these changes into his manufacturing processes, around half of all cars on the road were Model Ts.

Ford’s advent of the first continuously moving production line, a now fundamental method for manufacturing almost everything in our modern world, cemented the success of his company well into the rest of Ford’s life. As a now multi-million-dollar car manufacturer, the Ford Motor Company still persists to this day and, recognizing Ford’s achievements alongside his more controversial history of antisemitism, continues to adapt its practices to fit with the changing times.

Other notable modern car companies have shaped their own manufacturing operations around Ford’s early production lines and, building on the century old idea, have set about introducing new methods to further increase efficiency.

Elon Musk, the CEO of Tesla Motors, has previously referenced Henry Ford as a key influence for the company’s own production processes but, also raised the importance of developing on these ideas with “a radical redesign of the core technology of building a car”.

As the world’s foremost electric vehicle manufacturer, all of Tesla’s factories are highly automated and, through the use of state-of-the-art robotics and sensor technology, the company is able to construct an average of 500,000 to 600,000 vehicles per year. Similarly to Ford, many of the individual tasks along the production line are fairly repetitive so can be completed in quick succession by the specially designed robots. The more intricate or difficult roles are still completed by humans who, as Gilbert Passin the former VP of Manufacturing outlined, are currently superior to robots at tasks “where there is a lot of value for that intelligence”.

In the past, Musk has imagined the factory of the future something akin to an “alien dreadnought” that, as an expansion of Henry Ford’s initial production line, could easily mass produce battery cells “faster than bullets from a machine gun”.

Whilst this may appear to be a far-off dream for Musk’s company, Birgit Dietze, a spokesperson for Germany’s autoworkers’ union, contend that this could actually be achieved with proper investment and planning from Tesla’s side:

“Tesla has a bit of an advantage because it isn’t having to shift from using old tech to new tech, but is starting immediately with new technology. This simplifies matters somewhat,”

Tesla, specifically, has recently received support from members of the UK government for their proposal for a massive ‘Gigafactory’ in Somerset (South-West England) that industry experts speculate will continue pairing the company’s state-of-the-art robotics and human workers within the 90-acre site.

Although it is currently unknown whether Tesla will finalize this location for the construction for a new ‘Gigafactory’, it is clear to see how this multinational car company (and numerous others) have been shaped around Henry Ford’s first continuously moving production line back in 1914. As new automated methods of creating vehicles become increasingly used around the world, it is interesting to see that, regardless of these developments, modern production lines still function similarly to Ford’s century-old design.