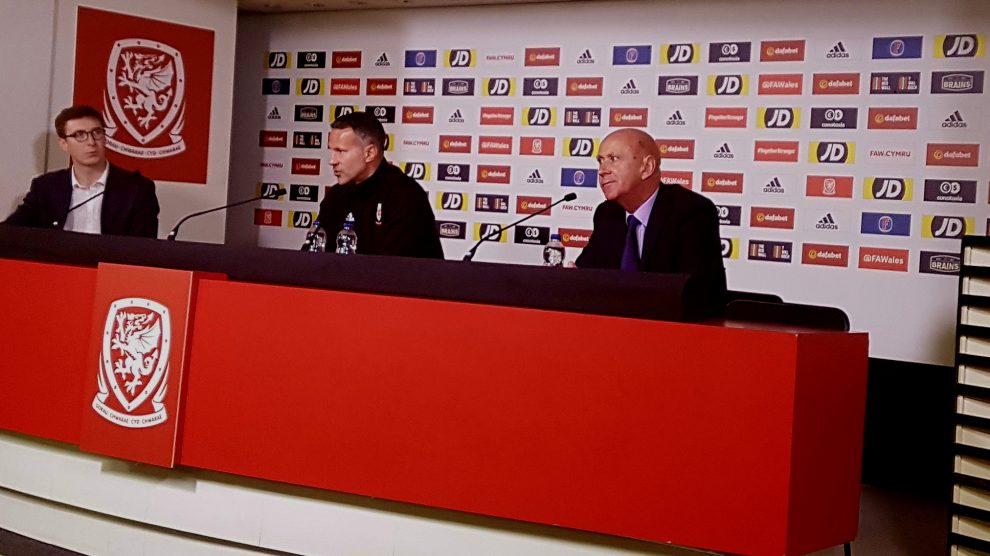 There’s considerable excitement, and a degree of apprehension, surrounding the FAW’s decision to return to the Principality Stadium, the first time in over seven-and-a-half years that international football will be played at the venue.

Despite the opposition from some sections of the Red Wall, the FAW are hopeful of attracting a larger crowd to the Principality. In Wales’ previous game at the Cardiff City Stadium, they attracted a crowd of 25,657 spectators as the national team comprehensively beat the Republic of Ireland, 4-1. The intention behind returning to Wales’ largest stadium, is to double the attendance figures in tomorrow night’s friendly against Spain – one of the giants of international football.

Ryan Giggs and Ashley Williams were tasked with media duties ahead of the mouth-watering fixture. During the conference, Ryan Giggs disclosed that he welcomes the challenge of hosting one of international football’s most recognisable and talented countries.

“A new manager, they were very impressive last month against England, and scoring six goals against the World Cup finalists [Croatia], it’s something special. So, we’re in for a tough game, but it’s also an exciting one. It gives a chance for the players to play against some of the best players in the world.”

Ashley Williams reinforced the significance of the clash with Spain, and he added that the Spanish national team retain their status of being one of the best in the world, even with their recent alterations.

“It looks a little bit different, they’re in a bit of transition themselves, but they’re obviously still a very good team. It’s going to be a difficult challenge for us; I still think they play the same kind of style that they always have. We’re expecting a tough game; it’ll be an interesting challenge.”

Naturally, as points are available in the Republic of Ireland game, and while considering it’s a competitive fixture, much of the focus has been placed on the Nations League match, yet, Ryan Giggs reiterated that Gareth Bale will be absent to face Spain. And, for now, his focus is placed on tomorrow night’s game.

“He’s extremely doubtful for tomorrow; he’s got a little bit of muscle fatigue from the weekend. It’s nothing serious, but we’re monitoring it daily to give him every chance for Tuesday. He’s probably 50/50, at the moment, [for the Ireland game]. Obviously we don’t want to take any risks.”

The Welsh captain, Ashely Williams, reiterated that his absence will be a loss to the team, but they’re able to cope in his absence.

“Obviously, it’s a blow. He’s our best player, and we always want him on the pitch as much as we can. We’ll miss him, that goes without saying, but, it gives a chance for someone else to come in and do a job.”

As previously mentioned, much of the discussions surrounding the game against Spain have been placed on FAW’s decision to return to the Principality Stadium, and both Giggs and Williams, have welcomed the return. On the topic of the stadium change, Giggs discussed the importance of having a closed roof, and he confirmed it was his choice to keep the roof closed for the game tomorrow.

“The roof will be closed. Yeah, [it’s my decision]. In my experience it’s always something special, it doesn’t happen very often. So, again, it’s something for the players to experience that’s a little bit different. I was excited when we had the chance to play here [Principality Stadium]. It’s a great stadium.”

Ashely Williams echoed his manager’s views, and he discussed how visually striking the stadium is.

“It’s impressive, isn’t it? When you go out there [on the pitch]. The roof closed changes things a little bit; it’s a different feeling out there. A few of us have played here before, but, probably most haven’t. I’m sure everyone’s looking forward to it, everyone wants to play some part of the game, and be out there in that stadium.”

As we approach the start of the game, the excitement begins to ensue, and anticipation rises. The question that remains to be seen is whether Wales will be victorious against one of the most proficient teams in international football? Only time will tell.