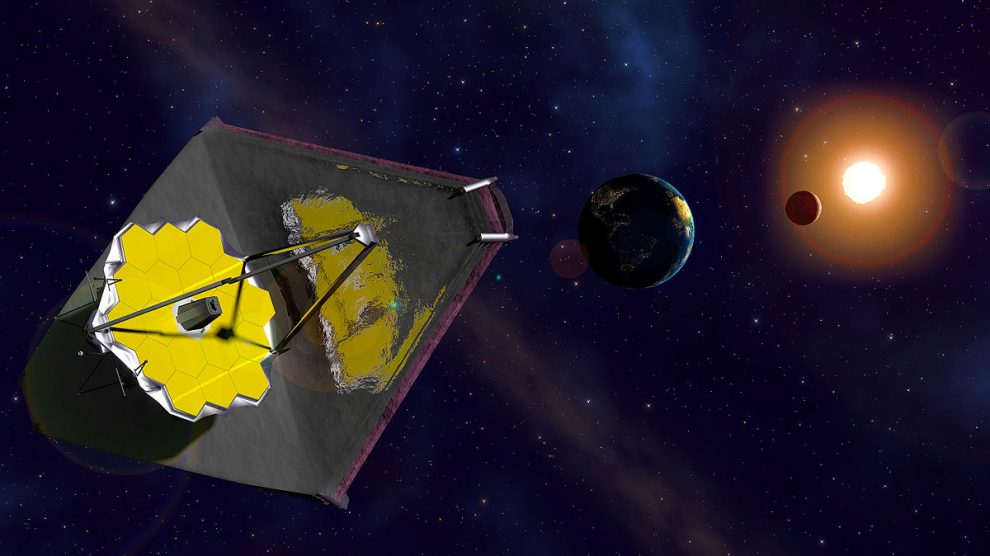 By Mia Becker-Hansen | Head of Science and Technology

After a tense few weeks, the James Web Space Telescope has successfully reached its final destination, known as the second Lagrange point, or L2, which is located 1 million miles from Earth. The telescope is not orbiting the Earth like the Hubble Space Telescope, but is instead orbiting the Sun.

What is so special about this orbit path is that it allows the telescope to stay in line with the Earth as it moves around the Sun, allowing the satellite’s large sunshield to protect the telescope from the light and heat of the Sun, and Earth. This is important as the telescope will be observing in infrared, and requires to be operated at freezing temperatures. This results in the temperature difference between the hot and cold size to be huge, you could almost boil hot water on the hot side, and freeze nitrogen on the cold side!

The travelling to L2 also had to be done in conjunction with the deployment on the telescopes instruments. James Webb was designed to be compact for its launch, with its full-size mirror and sun-shield effectively ‘folding out’ when in space. The process required a series of highly delicate and complicated manoeuvres, a choreography that has not been performed by any other spacecraft in astronomic history, and it was completely successful.

“We’re one step closer to uncovering the mysteries of the universe. And I can’t wait to see Webb’s first new views of the universe this summer!” the Nasa administrator, Bill Nelson, said in a statement. The telescope has been dubbed as a ‘time machine’ by scientists, allowing us to look further back in time than ever done before, even as far back as when the first stars and galaxies were forming 13.7 billion years ago, only 100 million years from the Big Bang. It also has the potential to look at the atmospheres of distant plants, allowing us to glimpse the possibility of discovering life on a planet other than our own.

However, the telescope is still months from taking its first official images. It has to cool down first and undergo weeks of calibration work, in order to ensure the eighteen segments of the main mirror work as one efficiently. NASA released on their Twitter that the first object the telescope will be pointed at is HD 84406, a Sun-like star which resides around 260 light years away in the constellation Ursa Major. They said, ‘While it [the chosen star] will be too bright for Webb to study once the telescope is in focus, it’s a perfect target for Webb to gather engineering data & start mirror alignment.’. They also announced that all this calibration data will be made public at the end of commissioning.

Once James Webb completes its first round of calibrations, it will move onto other observations which will test other aspects of the telescope. The first ‘official’ scientific observation will be in May, though the target has not yet been revealed. When the telescope begins observations properly in mid-summer this year, the high-gain antenna will transfer at least 28.6 Gigabytes of data to Earth twice daily.