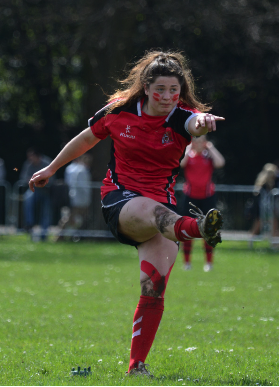 In what proved to be a hugely entertaining encounter, Cardiff ladies’ rugby team ran in eight tries in an impressive showcase of running rugby, resulting in an utterly dominant victory.

From the very first whistle, the home side looked to be in the ascendency, winning front-foot, and quick ball, which stretched the visitors. After a sustained period of Cardiff pressure, outside half Elinor Snowsil slotted over a penalty from in front of the posts to give the home side a 3-0 lead.

Despite some very good Swansea defending, the impressive Snowsil was the beneficiary of an overlap and dotted the ball down in the corner, and her subsequent conversion put Cardiff 10-0 ahead.  After a sustained period of attack, Snowsil produced a delightful dummy on the 22 to run in unopposed, before adding another conversion to give Cardiff a 17-0 lead.

Before the first half was over, the home side showed their clinical edge when winger Emily Houghton crossed in the corner after a lovely move that included both forwards and backs.

The second half began in the same dominant manner, with Cardiff lock Lauren Cooper touching down at the end of a driving lineout for yet another try.

Despite a period of Swansea pressure, the visitors could not cope with Cardiff’s intensity. This was no more evident than when centre Alice Seaton scored a try to put Cardiff 34-0 ahead.

There was more suffering to come for the away side, as Cardiff worked a try from inside their own half that was eventually scored by left-winger Laura Waddilove. Jessica Ferguson’s conversion made it 43-0 and Ferguson’s subsequent try and conversion brought up the half-century.

To their credit, Swansea never gave up, and they finally got the try that their efforts deserved after a series of pick-and-goes, with the subsequent conversion meaning that the game finished 50-7 to Cardiff Ladies.