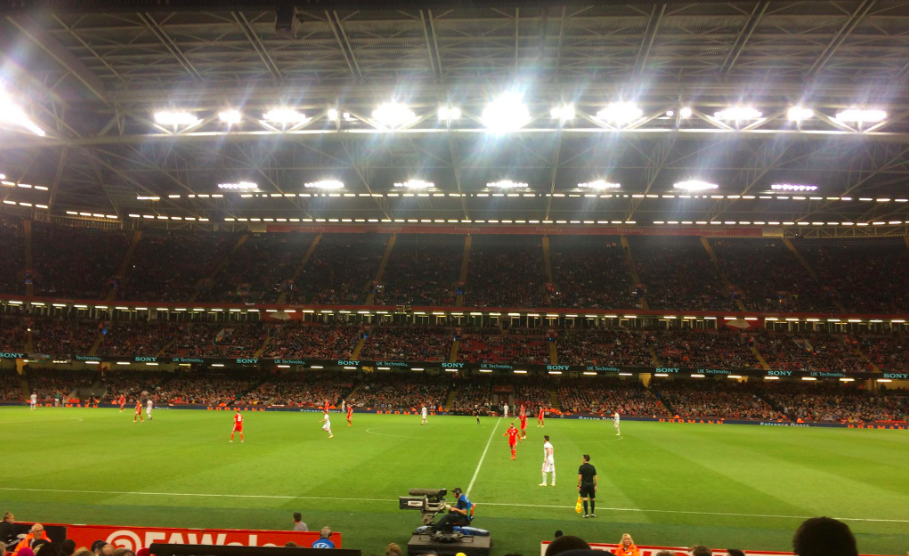 By Reece Chambers
Gair Rhydd at the Principality Stadium

Wales’s return to the Principality Stadium was met by a humbling 4-1 defeat to Spain in what was a footballing lesson for Ryan Giggs’ young Welsh side.

Wales returned to the national stadium for the first time since 2011 in what was a one-off international friendly match against one of the world’s greatest footballing sides.

Spain took the lead early on through Borussia Dortmund forward Paco Alcacer who scored twice either side of a headed goal from Spain’s captain, Sergio Ramos.

Spain and Real Madrid captain, Ramos, scored on what was his 159th appearance for the national side – just eight caps between record-holder and former teammate Iker Casillas.

A consolation goal from Sam Vokes in the 89th minute was the only highlight in the game for Wales – answering a Marc Bartra goal in the 74th minute.

Luis Enrique’s Spain took full control of the game from the first whistle as was probably expected by most fans in the stadium before kick-off.

However, the manner in which Spain dominated possession, passes and chances created not only frustrated supporters within the Principality Stadium, but also provided a stark reminder of where this young Welsh squad current is in their development.

Spain took the lead in the eighth minute through Paco Alcacer when the Welsh defence failed to clear a Jose Gaya shot from long range. Alcacer, the Barcelona forward currently on-loan at Borussia Dortmund, finished well from the edge of the area to silence the Welsh crowd within the stadium early on.

Throughout the first half, Spain looked very comfortable in possession with Rodri and Saul bossing proceedings in midfield. Time after time, Spain had unmarked men in dangerous positions which frequently threatened the Welsh back three of Gunter, Williams and Davies.

Such intense pressure from Spain led to two goals in quick succession for the visitors, Spain. First, La Furia Roja’s captain Sergio Ramos headed into Hennessey’s net from a Suso free-kick to give him a goal on his 159th appearance for the national side.

Shortly after, in the 29th minute, Alcacer scored his second – capitalising on poor defensive work from the Welsh defence – finishing with ease past Wayne Hennessey.

For Alcacer, that’s now eight goals in 14 appearances for the Spanish national team.

In truth, Wales had very little to show for in the first half other than a half-chance for Ethan Ampadu from a corner – hitting the woodwork with an improvised header.

At half time, there would have been a lot to say for Ryan Giggs in the Welsh changing room. Most notably, Wales needed a serious change in formation that should have probably been made during the first half.

Spain’s attacking play had been far too much for Wales in the opening 45 minutes; in particular, with Spanish forwards finding space in dangerous pockets of space between Wales’ defensive and midfield lines.

Into the second half, it was more of the same dominance in possession for Spain with Rodri the lynchpin in midfield.

However, a change for Wales to a back four as opposed to a back five limited Spain’s possession in dangerous areas.

With a whole host of substitutions in the second half – including the introduction of Brooks, Lawrence and Richards – Wales had more energy about their game.

Nevertheless, most of that energy came in the form of Welsh defensive duties with Spain dominating possession throughout.

The away side extended their lead further in the 74th minute when Marc Bartra headed in from a corner kick.

And, but for a late signature Sam Vokes header, Wales had very little to show for in a footballing lesson taught by fine Spanish talent.

For the young Welsh talent, this was an opportunity to showcase their skills at the national stadium in front of 50,000+ fans. However, what was showcased was a clear gulf in class between the two sides.

Luis Enrique’s Spain showed that they are still a force to be reckoned with in international football.

For Giggs, a very challenging evening would have told him a lot about his players and their ability to cope under the pressure that the Principality Stadium offered.

Ultimately, it was a match that proved the gulf in class between Wales and Spain. Nevertheless, though, it would have offered invaluable experience for young players such as Wilson, Ampadu and Brooks.

A gulf in class, for sure, but Spain’s performance was a lesson for the young Welsh players and should be used as a marking point for where they want their careers to go.