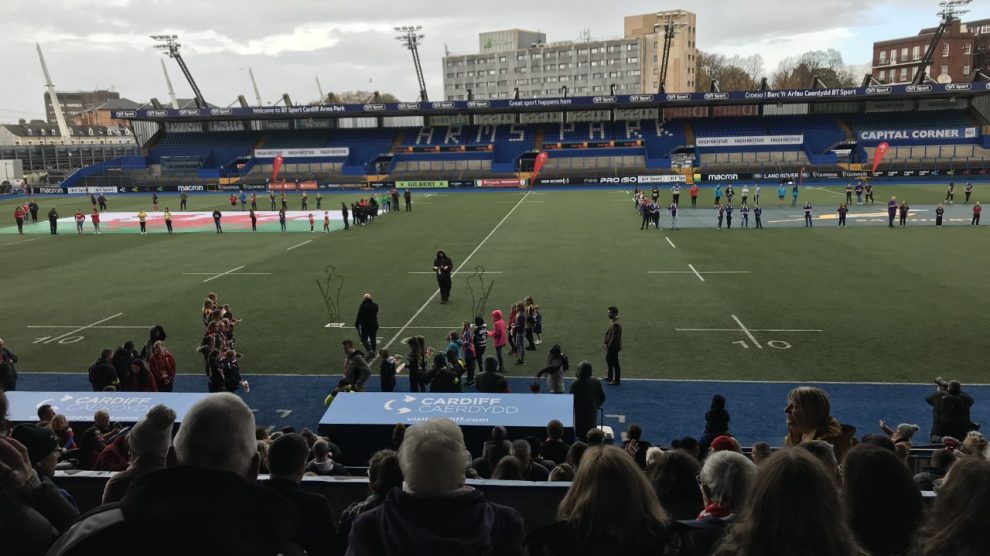 With Wales delivering on its classic weather, a dreary Arms Park was venue for Wales momentous win. Before the game commenced a minute silence was held for Remembrance Day. This was followed by both anthems. The South African team were singing with pride, as it was their first test match in four years. However, with the advantage of a home crowd the Welsh anthem bellowed throughout the ground.

From the off, you could see it was going to be a very physical game. Both sides getting in the big tackles. The weather ensured that the ball was frequently being knocked on by both sides. First scrum of the match was to Wales. Wales dominated making meters from it. The scrums were a problematic aspect throughout for South Africa. However, they had plenty to try and resurrect themselves, but Wales were not allowing it.

Not long into the first half, Wales scored their first try by taking advantage of the South African defence and using the overlap on the wing, to allow 14 Jazz Joyce to get over the try line. South Africa tried to penetrate the Welsh defence but they could not get past them. Wales were quick off the line and putting in tackles that were driving the attack backwards. South Africa had opportunities to use the overlap but could never execute it.

As the rain pounded down, play got scrappy by both sides. Penalties being awarded for multiple offences either side.

As the first half came to an end, Wales were inside South Africa’s 22’. They won the ball and the Welsh maul was gaining yards. With play now in the springboks 5m, Wales had momentum. With South Africa playing with panic, a yellow card was given to 14 Nosiphiwo Goda for being offside. Wales took advantage of this and attempted to score another try but it was disallowed. With a scrum on the 5m line, Wales pushed through and 8 Sioned Harris was able to score. With fly-half Robyn Wilkins, converting it. Bringing in the last points of the first half, 12-0 Wales.

The second half brought with it the sun as the blue sky broke through the grey Welsh weather. Play began with the same physicality as it had finished in the first. Wales again looked to take advantage of South Africa’s narrows defence but were unable to finish the play off. However, Wales kept playing in their phases and making the springboks work hard to keep them out of their 22’. With this pressure, the South African’s discipline started to slip within the game and foul play. With Sioned Harris and 3 Amy Evans having suspect bite marks.

A poor counter ruck from Wales resulted in a South African turnover. With the Boks having momentum, they were making quick yards and were able to get over the Welsh try line for the first time during the game. 8, Aseza Hele, used her brute strength to land over the white wash. However, it was disallowed due to an earlier knock on.

Wales’ only yellow card of the match was given to 8 Sioned Harris. Being a player down did not hinder the Welsh defence. South Africa spent a long time in the Welsh 5m line, unable to get through the strong Welsh defence. The springboks finally got a well-deserved try from a quick ball off the back of the scrum with Aseza Hale offloading to 12 Zinhle Ndawonde to get over the line. Leaving Wales in the lead 12-5.

The last quarter came, and fresh legs were being brought on with the introduction of 23 Lisa Neuman, 17 Cara Hope, 21 Ffion Lewis Wales had momentum and were working through the phases in the South African half. However, play was stopped as there was a serious injury to 12 Kerin Lake in a head collision where she was stretchered off. But Wales did not turn off and were able to seal the win with captain Carys Phillips crossing the line after a strong Welsh maul.

Wales can learn from this game and tidy up a few of their mistakes when they take on Hong Kong on Friday 16th at the Arms Park. KO 7:00pm.