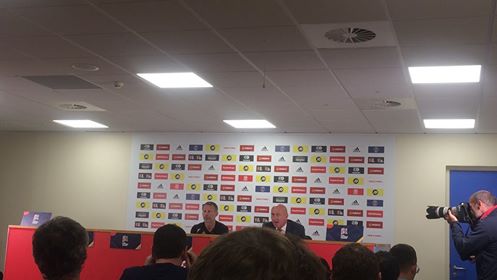 Wales boss Ryan Giggs says it will be a ‘proud’ moment to lead his country against the Republic of Ireland in Thursday’s’ UEFA Nations League opener.

The brand new UEFA competition has confused most people in football, but Giggs has outlined that he will be fully focused on the game.

“It’s a proud moment for me, I’m very excited. The lads have trained well but we know we’re up against a tough team who will make it difficult for us,” said Giggs.

It will be the first time that Wales have face the Republic of Ireland since their defeat at the Cardiff City Stadium last October – a result that saw the Republic deny Wales a place at the 2018 World Cup.

However, a lot as changed in Welsh football since then with Giggs taking over from Wales’ most successful manager in many years, Chris Coleman.

“I’m following a fantastic manager who did what no other manager was able to do a very long time before. Maybe there’s an added little pressure… but we know we can do it.”

In what is his first competitive game as Wales manager, Giggs believes that it is a much more nerve racking experience as a manager than it was when he played for his national side.

“As a manager it’s different, a lot of things going through your head but the players have trained well and there’s not much more I can ask,” said Giggs.

Giggs made his debut for Wales aged 17 before making a total of 64 appearances. At today’s press conference, he was keen to reiterate his belief in the current crop of youth talent in the squad.

“I’ve got a real balance in the squad and I want to keep them competitive.

“I got a chance when I was younger and age doesn’t matter to me. It’s great for the older players to show them the way and they are a great group.”

The Wales boss was complimentary of the Republic ahead of the UEFA Nations League match.

“We know they’re going to make it difficult for us whoever plays. 6 competitive games unbeaten against very good teams, that’s not a fluke… I expect a tough game,” said Giggs.

After Thursday’s opener, Giggs travels with his squad to Denmark where they face a unique situation ahead of Sunday’s game.

With a dispute between the Danish Football Association and senior players resulting in none of the 24-man squad that reached the last 16 of the 2018 World Cup playing against Wales, Giggs has highlighted the precarious situation.

“It’s not ideal obviously. They’ve got to put out some sort of team. What do they do?

“They’ve got a real dilemma, its unique so it’s hard to comment on. Whatever happens Sunday I’ll deal with that after the game tomorrow.”

Wales kick off their UEFA Nations League campaign against the Republic of Ireland on Thursday (7.45pm) at the Cardiff City Stadium.