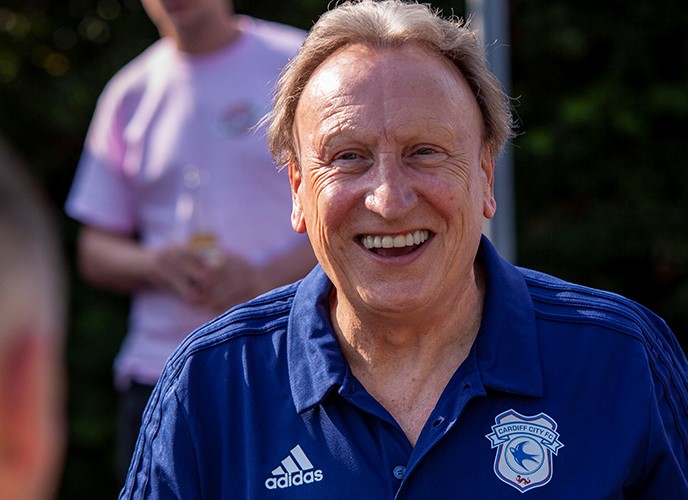 Neil Warnock’s three years at Cardiff City were transformational, emotional and compelling – with never a dull moment in between. In tribute to the veteran manager, Gair Rhydd Sport has taken a look back at an era that will go down in Bluebirds history.

Cardiff were on a steady decline when Warnock arrived in South Wales in October 2016. Following relegation from the Premier League and Ole Gunnar Solskjaer’s fateful spell in charge in 2014, Russell Slade had driven fans away with his dreary brand of football and Paul Trollope, in his first managerial role for six years, won just two of twelve games before getting sacked with the club second from bottom.

It cannot be understated just how impressive the transformation was that Warnock carried out over the next 18 months. Despite being the Football League’s oldest manager, he took the club to a level that had previously been unimaginable.

He got off to a perfect start, beating local rivals Bristol City 2-1 in his first game thanks to a goal from Sol Bamba, who had arrived on a free transfer less than a week after the new manager was appointed. In many ways, Bamba would come to epitomise the Warnock era at Cardiff. The defender’s key traits of determination, hard work and fighting spirit would come to characterise the whole team, while his infectious personality is similar to that of Warnock’s.

Like Bamba, Junior Hoilett was signed up for free almost instantly, and Neil Etheridge and Nathaniel Mendez-Laing also joined for absolutely nothing the following summer along with Callum Paterson on a Bosman transfer. None of these players had ever achieved an awful lot in their career, but they became integral parts of Cardiff’s promotion-winning side in 2017/18. In an era when teams are increasingly forced to spend a lot of money to get out of the Championship, the Bluebirds’ selection of bargain players plucked from obscurity was a refreshing change.

Cardiff weren’t even being tipped for the play-offs at the start of that incredible campaign, let alone automatic promotion. But they won each of their first five games and didn’t drop out of the top four all season, holding their nerve under continual pressure from Fulham towards the end of the campaign to make the top two. The Bluebirds rarely faulted, defying the odds and the pundits who were waiting for their downfall. They lost just three games at the Cardiff City Stadium all season, and had the joint best defensive record in the league.

Their direct, no nonsense football may not have been particularly attractive to watch – Cardiff ranked bottom for total number of passes and pass accuracy and 21st for average possession – but it was hugely effective. A never-say-die attitude and momentous team spirit made the Bluebirds incredibly hard to beat. That is one of the hardest things to coach in football, and was at the core of Warnock’s Cardiff transformation.

He significantly improved individual players too. Captain Sean Morrison became one of the best centre-backs in the league under Warnock, always leading by example. He was an imposing figure in both boxes on the way to promotion, scoring an impressive seven goals. Callum Paterson meanwhile was signed from Hearts as a right-back and converted by Warnock into a midfielder with freedom to roam. The decision proved to be a masterstroke, with the Scottish international contributing 10 goals and five assists in his debut campaign.

The ‘most difficult week’ of Warnock’s career

The Premier League has never been kind to Warnock and Cardiff’s only previous season there ended with the club bottom of the table, so survival was always going to be a difficult challenge. But the Bluebirds came much closer to beating the drop than many predicted, finishing just two points from safety with relegation only confirmed in the penultimate game.

There were highlights, such as the home wins over Fulham, Wolves and Bournemouth, the dramatic away victory against Southampton and the historic final day swansong against Manchester United. But ultimately Cardiff failed to deal with the demands of the top-flight on too many occasions and their lack of quality was exposed by better teams.

In addition, Cardiff’s season was clouded by the Emiliano Sala tragedy that shocked the football world. One of the most affected was Warnock, who had met Sala several times and welcomed him to South Wales. He described it as the “most difficult week” of his career, in which he contemplated leaving the club. He cited it again in his leaving statement last week, saying 2019 had been the “most challenging period both emotionally and physically that I have ever encountered”. It was rare to see the veteran boss go into his shell, and it seems he understandably is yet to quite comprehend the devastating incident.

As is the case with most relegated teams, promotion was the expectation for Cardiff upon their return to the Championship. But whether it was a relegation hangover or Warnock making it very public that he would be leaving next summer, the team appeared to lack the motivation and desire that is at the heart of Warnock’s philosophy. Several injuries to key players compounded their problems.

Wins over Queens Park Rangers and Birmingham provided glimpses of Bluebirds potential, but it was clear something wasn’t quite right. Defeats to local rivals Swansea City and Bristol City laid bare Cardiff’s flaws and the frustrations of fans grew.

Warnock had teased quitting on a number of occasions, and went to chairman Mehmet Dalman after the Bristol City loss to tell him that it was best for him to step down. It seemed like the right decision to make, and ensures he remains held in high regard with supporters, who can only thank Warnock for the joy he brought and how he transformed their club. He has been described by many as one of Cardiff’s greatest ever managers.

Warnock is the last person you would rule out returning to management, but if this is the last we’ve seen of him in the dugout, then football will be without one of its icons. In a world of media-trained professionals, Warnock is the anomaly. He’s not afraid to tell it like it is, but equally will be the first to crack a joke at any opportunity. He is pure entertainment and there’s something eminently watchable about him – whether it’s his raging, profanatory half-time team-talks (well worth a search on YouTube) or standing disconsolate with his hands on his head staring at referee Craig Pawson for an uncomfortable length of time after Cardiff’s defeat to Chelsea last season. I could write a whole feature on iconic Warnock quotes and moments.

Although his 40-year managerial career has had its low points, his successes have been remarkable. Warnock has achieved a record eight promotions in English football, transforming the likes of Notts County, Sheffield United and Queens Park Rangers in the process. Even at clubs that he hasn’t got promoted, Warnock has had a significant impact, saving clubs such as Torquay United and Rotherham United from relegation. Among all of these though, he still ranks promotion with Cardiff as his greatest ever achievement.

What next for the Bluebirds?

Former Millwall boss Neil Harris was named as the new manager on Saturday afternoon, suggesting that club were keen for a smooth transition between bosses. Harris’s style is similar to that of Warnock and the appointment certainly appears to make sense, considering the squad would not be suited to a possession-based system, and may just need a shot of motivation to get a bit of confidence back.

After all, there is undoubted quality in this Cardiff side. The core of the team that won promotion remains at the club, and success this season remains an open possibility. The Bluebirds are seven points off the play-offs with 30 games still play – that’s two thirds of the season to close what isn’t a significant gap. A run of three or four wins in the Championship can catapult a team up the table, and Cardiff face two of the bottom three – Stoke City and Barnsley – in their next four games. Harris will also have the January transfer window to strengthen his side, so don’t rule out another promotion push in South Wales.