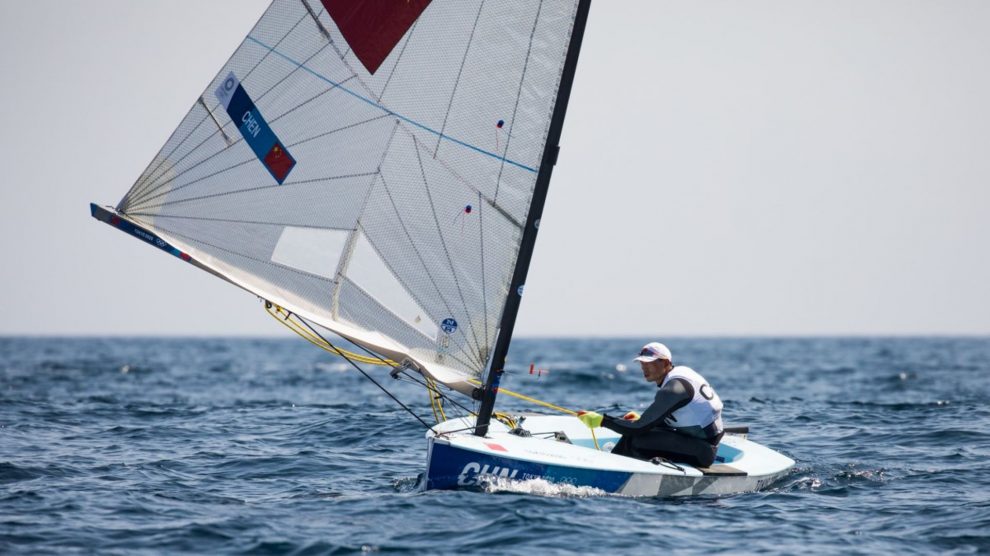 The 2020 Tokyo Olympic Games in Tokyo have seen Great Britain break records and set new expectations across multiple sports, with new stars emerging as the old guard fades away. Days 7, 8 and 9 provided even more success, with a few shocks and disappointments along the way.

Day Seven of the Tokyo 2020 Olympics marked the beginning of the athletics, with many Brits expected to challenge for medals.

The most highly anticipated, perhaps, was 100m sprinter, and 2019 world champion, Dina Asher Smith. On Friday she cruised through her heat in second behind Teahna Daniels of the USA. Along with Asher-Smith, GB’s Daryll Neita ran a personal best time of 10.96 seconds to qualify for the semi-final. In addition, Asha Philip finished second in her heat as well.

Elsewhere, Tom Gale made his season’s best jump of 2.28m to progress to the men’s high jump final, and in the women’s 800m heats, Jemma Reekie won her heat, with Keely Hodgkinson and Alex Bell also both qualifying.

GB’s hopefuls in the men’s steeplechase finished 13th and 14th as Lawrence Okoye was unable to qualify for the men’s discus final and a trio of British women failed to progress past the heats of the women’s 5000m.

There was yet more success in the pool, with Duncan Scott taking his third medal of Tokyo 2020, claiming silver behind Shun Wang of China in the men’s 200m individual medley.  The day also saw Luke Greenbank achieve third place in the men’s 200m backstroke final, behind the ROC’s Evgeny Rylov, who set a new Olympic record after finishing first. Both swimmers also helped take the Team GB 4x100m medley relay squad into the final, alongside James Wilby and James Guy. Meanwhile, Molly Renshaw and Abbie Wood took sixth and seventh spot respectively in the women’s 200m breaststroke final, and Anna Hopkin finished 7th in the final of the women’s 100m freestyle.

Perhaps the most notable success stories of the day came in the BMX finals, with Kye White taking the silver medal in the men’s event while Beth Shriever achieved Britain’s first ever gold medal in the sport in the women’s competition. Shriever had previously had her funding retracted, and as such had to take on a job as a teaching assistant, as well as using crowdfunding, alongside her training, in order to reach Tokyo in the first place. With the pair aged 21 and 22 respectively, there is perhaps even more to be seen in Paris in 2024.

In trampolining, fan favourite Bryony Page added to her silver from Rio 2016 with a bronze in the final of Tokyo 2021, with yet another impressive display.

Rio 2016 sailing stars Hannah Mills and Eilidh McIntyre ended the day second overall in the women’s 470, having finished third in the day’s two races. Should Mills win gold, she will become GB’s most decorated female sailor. In the men’s 470, Luke Patience and Chris Grube held onto second spot overall despite finishing 5th and 10th on the day. In the men’s 49er class, Dylan Fletcher and Stuart Bithell remained at top spot in the rankings, with just three races left to go before the medal race.

In rowing, there was a Bronze medal claimed in the men’s eight final by Team GB, finishing behind New Zealand and Germany. Vicky Thornley put in a valiant performance in the women’s single sculls, but was only able to reach fourth.

Elsewhere, Team GB’s women’s football team were knocked out by Australia, with the women’s rugby sevens side reaching the semi-finals, where they will play France. Oliver Townend claimed an early lead in the first session of the dressage in the men’s event and Bradley Forbes-Cryans finished sixth in the men’s kayak slalom final.

Day Eight at the Tokyo 2020 Olympics started with GB gold in a brand-new event – the mixed triathlon relay – in which a team of Jess Learmonth, Jonnie Brownlee, Georgia Taylor-Brown and Alex Yee dominated against strong opposition to take the event’s first ever gold medal for GB.

Mixed relays proved a ‘gold mine’ for GB, as Kathleen Dawson, Adam Peaty, James Guy and Anna Hopkin took gold in the 4x100m mixed medley relay, also setting a new world record for the event. Also in the pool, Ben Proud finished third in his semi-final to take a place in the men’s 50m freestyle final.

Windsurfer Emma Wilson won a bronze medal in the RS:X by finishing second in the medal race. Reigning champion Giles Scott leads in the men’s Finn after winning his second race. In the Nacra17 programme, John Gimson and Anna Burnet currently sit in second place after they won their last race of the day.

In athletics, Daryll Neita’s Olympic debut saw her finish 8th in the women’s 100m final in a time of 11.12 seconds. The biggest shock came from Dina Asher-Smith, thought to be in contention for gold, failing to qualify from her semi-final. She went on to withdraw from the 200m competition, revealing that prior to the Games she had suffered from a torn hamstring.

Team GB are now top of the standings following the third dressage session in the evening, with Oliver Townend second in the individual rankings, while Laura Collett and Tom McEwen are 6th and 12th respectively.

In the women’s rugby sevens, there was heartbreak for GB as they lost their semi-final to France 26-19, and also lost the bronze medal play-off 21-12 by a spirited Fijian side, who claimed their first medal in the women’s sevens, adding to the golds won by the men in both 2020 and 2016.

There was yet more success in the BMX events for Team GB on Sunday. Charlotte Worthington produced a stellar second run to achieve a score of 97.5, winning gold in the women’s freestyle. She also produced a backflip 360, a trick that before then had never been completed successfully in a women’s competition. Meanwhile, Declan Brooks claimed bronze in the men’s event with a score on his second run of 90.8.

One of the stars of Rio 2016 for Britain, Max Whitlock, became the first man to defend his gold medal on the Olympic pommel horse since 1980, scoring a remarkable 15.583 with a near-faultless performance.

Yet more success was found in the pool, with Luke Greenbank, Adam Peaty, James Guy and Duncan Scott winning silver in the men’s 4x100m medley final, in a European record time of 3:27:51. This made Duncan Scott the first ever GB swimmer to claim four medals at the same Games, with 1 gold and 3 silver to his name.

In the boxing ring, two British men secured a minimum of a silver medal by reaching their respective finals. Pat McCormack reached the welterweight final after opponent Aidan Walsh from Ireland pulled out with an injury to his ankle. Benjamin Whittaker saw himself through to the final of the light-heavyweight division with victory in his bout against Imam Khataev, winning 4-1 on points. Frazer Clarke is also guaranteed a medal, at least bronze, in the men’s super-heavyweight competition, after his opponent, Mourad Aliev, was disqualified in their quarter-final for use of the head.

Team GB remain top of the standings in the equestrian event. In the individual rankings, world number one Oliver Townend is in first, with Laura Collett third and Tom McEwen sixth. On Monday, the medals will be decided in the show jumping, with GB attempting to defend their 17.9 point lead across the rest of the Tokyo 2020 Olympics.

The Current Medal Standings at the Tokyo 2020 Olympics: 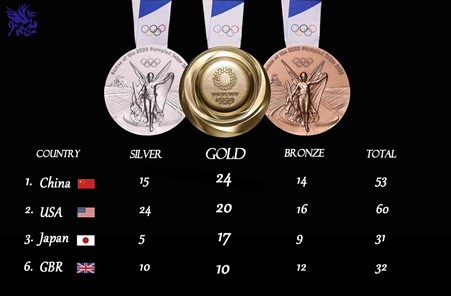