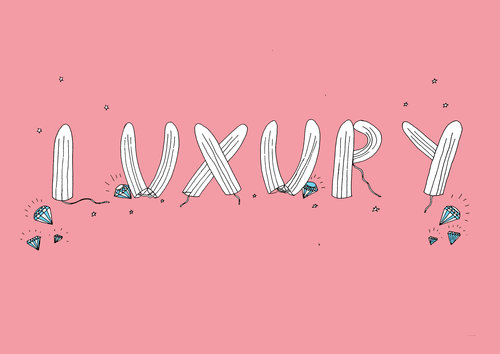 "People think it’s something far removed and quite shocking when in actual fact, a lot of people in Cardiff do suffer with period poverty"

As a young woman, the thought of not being able to access sanitary products is something I hope never to experience. And yet here in the UK, 1 in 10 girls can’t afford to buy menstrual products according to Plan International UK and 40% of girls in the UK have had to use just toilet roll because the price of tampons and pads are too expensive. These are just some of the reasons why Cardiff’s Periods in Poverty project wants to raise awareness. We spoke to Beth Griffiths, Periods in Poverty’s media coordinator, about what the project does, what they want to achieve and how others can help.

The campaign, run and coordinated entirely by students, help to raise awareness of period poverty by campaigning and fundraising throughout the year. They work alongside lots of charities including Llamau, a homeless charity based in Cardiff and several domestic violence refuges.

One of the main ways they encourage others to help is through their collection bins. Students and members of the public are encouraged to donate sanitary and hygiene products into one of the three bins currently on campus, currently situated in the main reception of the Students’ Union, The Heath Campus Students’ Union and Chapter Arts Centre.

One of the main points Beth mentioned was how we feel that period poverty is a distant problem, one not associated with the UK. “In society, it’s not realised how widespread period poverty actually is. People think it’s something far removed and quite shocking when in actual fact, a lot of people in Cardiff do suffer with period poverty and there may even be some people in our own university. I think it’s important to raise awareness of this issue which I think quite often gets side-lined and not made aware of enough”. She explains how over the last year more awareness has been raised. “Tampon and period companies themselves have raised awareness producing campaigns on International Women’s Day where for every hashtag or tampon bought, they donated money and period products to those in period poverty”. However, one resolution to the problem would be to remove the tax on menstrual products, says Beth, which is where the Government need to step in. Tesco currently have removed the ‘tampon tax’ from it’s sanitary products but more has to be done to make products accessible to all.

The Periods in Poverty campaign have achieved a lot since it was founded 2 years ago. They have had several fundraisers including their Gala and Periods and Party events and have gradually increased their intake of sanitary products along the way, with the last count reaching nearly 4,000. In the near future, the Periods in Poverty team hope to have the funds to purchase more bins so they can collect more products across the campus. As media coordinator, Beth hopes to increase their media presence by starting a blog, where she hopes volunteers will regularly write for.

If anyone would like to get involved with the Periods in Poverty campaign, you can sign up on the SU website or message their social media platforms.