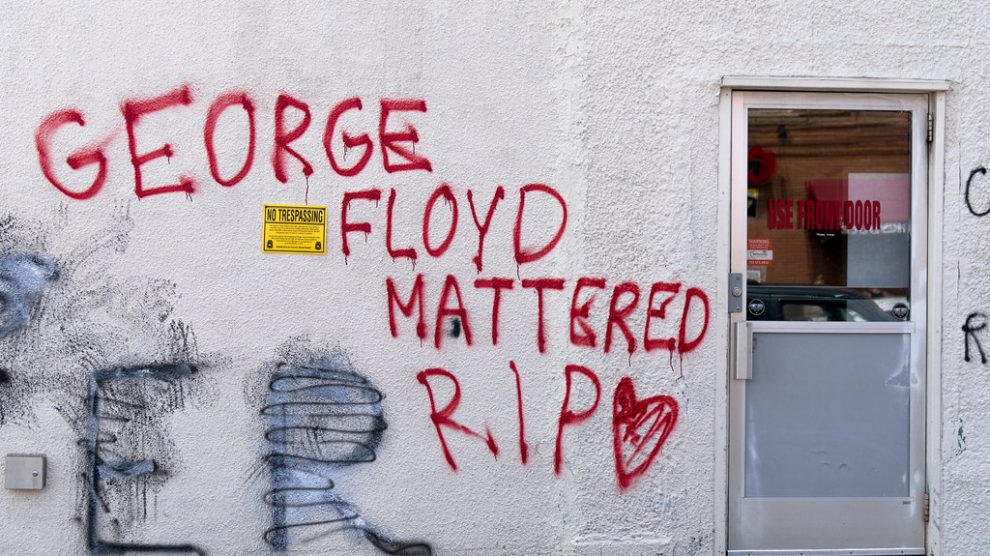 Thousands of people across the world have gathered to protest against the killing of unarmed African American George Floyd.

Floyd, who died in police custody on 25 May 2020, was said to have been attempting to buy cigarettes with a counterfeit $20 bill. During his arrest, four police officers detained Floyd, with one officer kneeling on Floyd’s neck for more than eight minutes, despite Floyd repeatedly telling them “I can’t breathe”.

Bystanders who were at the scene of the arrest filmed the incident and later posted the video online. The video has since sparked protests across the world, beginning in Minneapolis, the site of Floyd’s death.

A week following the death, daytime demonstrations have begun, focused on racism and police brutality. Protestors have been marching to show solidarity with the Black Lives Matter movement, which seeks to encourage an end to racism.

The demonstrations which have been taking place have seen much unrest. On Sunday, a fuel semi-truck was driven at protesters on a Minneapolis bridge. The bridge had been closed to traffic, and there are no reports of anyone having been hit by the tanker.

A driver was pulled from the semi-truck once it was stationary, and some protestors attempted to protect the driver from attackers before he was arrested by police.

Protesters have gathered all over America and all over the world. In Denver, Colorado, thousands protested peacefully, lying face down with their hands behind their backs and chanting “I can’t breathe” – in reference to the circumstances of George Floyd’s death.

Violence has erupted, however, in numerous cities across the US, with police in Washington DC firing tear gas at demonstrators who set fire to properties near the White House. More than 75 cities have been protesting, and arrests have been made for looting, blocking motorways, and breaking curfew.

Although rioting has taken place in some of the protests taking place in America, with the BBC reporting that at least 4,400 arrests have been made, protesting has often begun peacefully with marches.

Who else is protesting?

America has seen protesting in a number of its states and Canada and Germany have been just some of the countries protesting.

Included in those nations demonstrating in support of the Black Lives Matter movement are England and Wales.

Thousands of demonstrators across central London, Cardiff and Manchester gathered to protest against the killing of George Floyd.

Protests in London were held at Trafalgar Square and outside the US Embassy in Battersea, with hundreds also demonstrating in Wales, in front of Cardiff Castle. In both cities, protestors sat and held placards displaying sayings such as “Black Lives Matter”, “Say their names” and “Racism has no place” among others.

During the protests, Metropolitan Police in London arrested five people for breaching Covid-19 legislation and assaulting police, although the protests were mainly peaceful.

In Cardiff, speeches about standing up to injustice and racism were given and protestors sat peacefully on the grounds in front of Cardiff Castle. Demonstrators were urged to practice social distancing as they sat with placards to show their support.

At Battersea Park Station in London, four men climbed atop a bus stop before getting down one knee and raising their right arms to salute in silence, with the crowd in front of them doing the same.

The stance was originally made famous by Tommie Smith, a US Sprinter who raised his fist in protest against racial discrimination during his gold medal ceremony at the 1968 Olympic Games. Smith and his teammate John Carlos raised their fists to represent African-American poverty in the United States.

American footballer Colin Kaepernick held the same pose during the singing of the US anthem in protest of racial injustice in 2016.

The stance has since become an important symbol of the Black Lives Matter movement.

The death of George Floyd follows numerous high-profile cases of black Americans and black Britons who have died in police custody. The deaths of Michael Brown in Ferguson, Alabama, and Eric Garner in New York and Mark Duggan in Tottenham Hale in London, to name but a few, have driven the Black Lives Matter movement.

According to the BBC, these protests show that the world is experiencing the “most widespread racial turbulence and civil unrest” since the assassination of Martin Luther King Jr in 1968.

Protests are set to continue across the United States and the UK over the coming weeks in solidarity with the Black Lives Matter movement.(vai