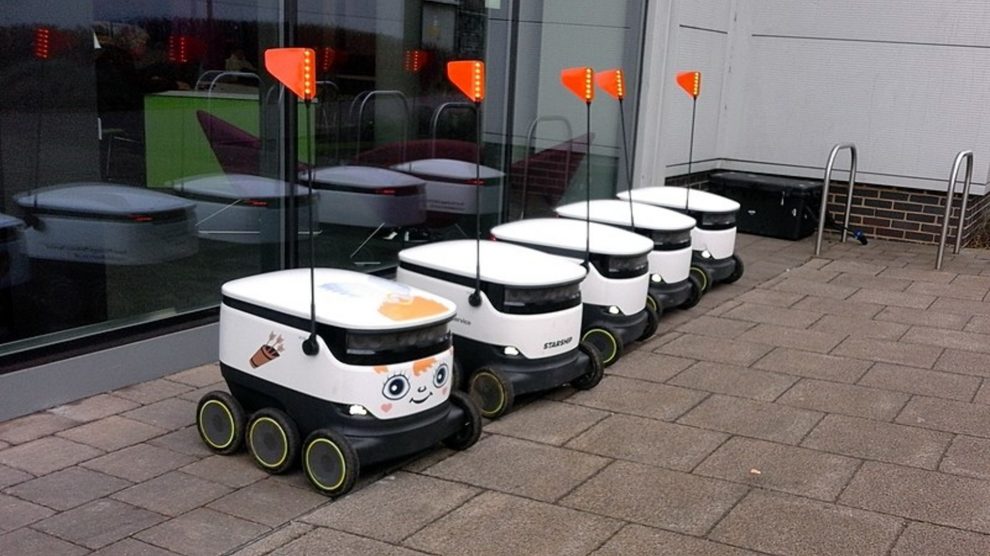 Similar to other delivery services, autonomous delivery robots offer the opportunity to transport a variety of essential goods directly and safely to customers. This modernised method of delivery has been adopted by an increasing number of companies which, because unmanned deliveries bypass the potentially dangerous interaction between customers and delivery operators, have recently begun trials across the UK.

Tesco plc is one such company and, following careful consideration, has confirmed the start of a 6-month-long trial of its own drone delivery service in County Galway, Ireland. The trial, operating exclusively from Tesco’s Oranmore store, will allow local customers to schedule and receive deliveries of small items within approximately three minutes of placing an order.

Manna, an Ireland and Wales-based drone delivery company, provided the custom-made aerospace-grade drones for Tesco’s upcoming trial and, in addition, is currently trialling its own medical delivery service exclusively in Ireland. These high-tech autonomous drones have been specially designed to carry up to 4kg at a time and can reach speeds of up to 50 mph – Attributes of Manna’s high-speed delivery service that it claims could help the technology “completely replace road-based delivery”.

“We are interested to see how drones could be part of the solution to deliver to our customers on-demand small baskets. If our trial with Manna is successful, we believe there is an opportunity to reach many customers through our stores, extending via our drone service.”

Whilst many companies have only recently begun to develop their delivery services, numerous others have established and already found success with their own autonomous robotic delivery services; several of which were in operation long before the UK entered lockdown.

In Milton Keynes, the sight of miniature ground-based delivery robots has been a common and widely-welcomed advancement that, since their introduction in mid-March, have proven to be an essential source of food and package deliveries for NHS staff and essential workers living in congested, urban areas.

Starship Technologies, the San-Francisco-based robotics company behind the UK’s first commercial deployment of robotic delivery robots, has partnered with local supermarket chains in and around the Milton Keynes area to offer the direct delivery of groceries for almost 200,000 people living in lockdown.

The company’s revolutionary self-driving delivery robots function very similarly to modern driverless vehicles and use a variety of inbuilt cameras, ultrasonic sensors, and GPS navigation systems to calculate its route in reference to the physical landscape and potential hazards (e.g. crossings, congested areas).

During deliveries, these six-wheeled robots are also able to collaboratively map the features of an area with its 360° camera view, storing information that will continue to improve the navigational speed and efficiency of all units as deliveries expand into more locations.

Sam Crooks, the Mayor of Milton Keynes, briefly spoke on the impact of Starship’s delivery robots during the UK’s lockdown and said:

“I’ve got a fairly young demographic in my ward, and they love it. There was obviously a burst of use at the beginning, because of the novelty, but already it’s just a part of people’s routines.”

As physical interaction continues to be limited by the ongoing coronavirus health crisis, the operation of UK-based autonomous delivery services will increase significantly in response to rising demand which, following further development of these technologies, could see unmanned robotic deliveries become a mainstream aspect of modern living.