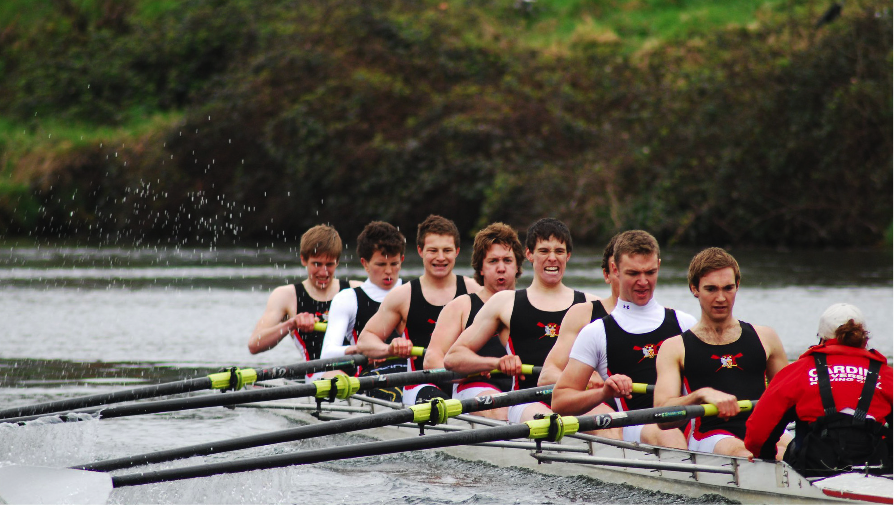 The weather was not at its best, nevertheless Cardiff Rowing Club made their way down to the bay to cheer on the 36 men and women representing the novice and senior squads.

The first race was the novice women, who after consecutive training sessions on the Thursday and Friday were feeling optimistic and were, as ever, the loudest of the rowers in the boatyard.

Swansea had clearly been training hard and it paid off as they started faster than Cardiff, initially pulling into the lead. However, the strength, power and effort of Cardiff revealed itself through three seat’s, Ashleigh Brooks’ facial expression, as they overtook Swansea quickly, maintaining their advantage to win their race convincingly.

An hour later came the novice men’s race, coxed by their captain Kat Heine. From the start Cardiff were evidently the better boat and approximately 750m from the finish, were initially the only boat in sight. Once Swansea came into view, it was clear that Cardiff had built a big enough lead to confidently win the race and make the overall score 2-0 in Cardiff’s favour.

In between races there was row pass from Cardiff rowing alumni, and this was marked by a minute’s silence to remember the tragic death of one of Cardiff Rowing club’s own in 2011.

The next race was the senior women’s. This race proved to be the closest yet and the girls worked hard to keep their lead, spurred on as spectators cheered them on close to the finish.

Despite both boats coming close together towards the end of the race, the Cardiff boat gave a final push to win the penultimate race of the day.

Finally it was the turn of the senior men, who after changes in the boat from last year’s winners, were not as confident as the rest of the squads knowing they would have a tough race against a strong Swansea boat.

However, Cardiff’s fears were confirmed and became evident to spectators, when viewing the race from Clarence Road Bridge, it was clear Swansea were in the lead and were there to stay.