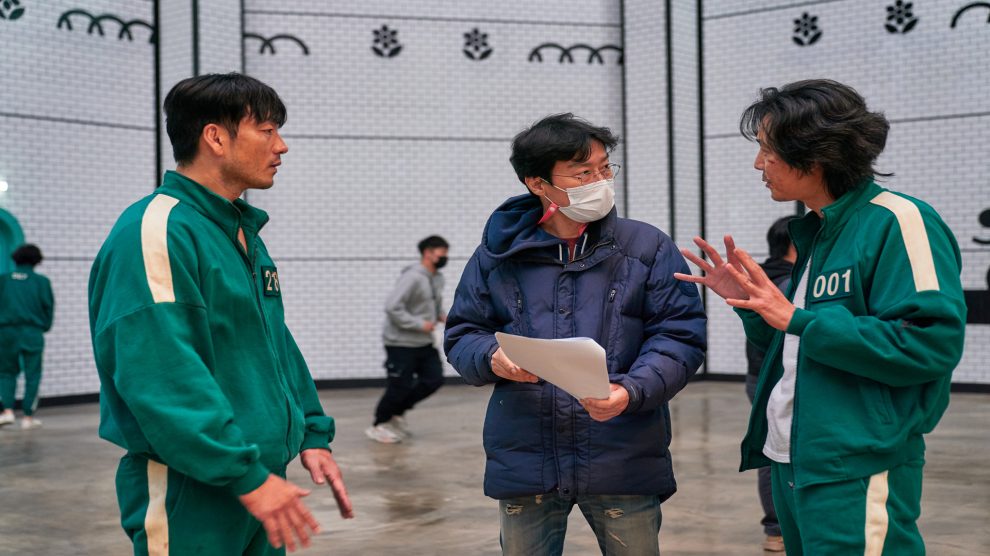 Since it’s debut on Netflix last month, dark Korean survival drama Squid Game has taken the world by storm. Within a week of its release, it became one of Netflix’s most watched shows globally. It broke records in being the first Korean show to top Netflix’s top ten chart and eventually came to reach number one in 90 countries.

Squid Game broke records in being the first Korean show to top Netflix’s top ten chart and eventually came to reach number one in 90 countries.

In the nine-part series, 456 people, all in debt, play a series of children’s games in hopes of winning 45.6 billion Korean won (about £28m). Unbeknownst to them, the penalty for losing is death, but upon finding out (in a chilling and gruesome scene set to Frank Sinatra’s ‘Fly Me to The Moon’) and disbanding the game, all return soon after, aware of the consequences and too desperate to care.

Squid Game is aesthetically gorgeous, using candy-coloured, playground-like set pieces as the backdrop to brutal violence and terror. The chilling score, peppered with child-like motifs, adds to the uncomfortable tension that only increases with each episode. While the violence in Squid Game is graphic and sometimes gory (though not, in my opinion, gratuitous), it’s the suffocating atmosphere of anticipation and anxiety that makes it so thrilling to watch.

It’s the suffocating atmosphere of anticipation makes it thrilling to watch.

Ultimately though, the heart of Squid Game is its characters. With a story like this, it would be easy for cynicism to take over, but it avoids a misanthropic tone through its empathy for its own characters. The players aren’t driven by greed or selfishness, but desperation, and the show never condemns them for the lengths they go to survive, but instead blames the system that has driven them to it.

Gi-hun (Lee Jung-jae), the main character, is deeply flawed, but still lovable. While a terrible father and son with a gambling addiction and a massive debt, his kindness and beaming friendliness make him easy to root for and Lee’s performance exudes a warmth and vulnerability that prevents the show from feeling too bleak.

The show also touches on relevant issues in South Korea with its characters, such as a North Korean defector trying to get her mother into the country and a migrant worker from Pakistan supporting his family. Sae-byeok (Jung Ho-yeon) and Ali (Anupam Tripathi) are, for me, the most sympathetic and enjoyable characters in the cast. Jung shines in her debut role as tough girl with a heart of gold Sae-byeok and Tripathi is undeniably loveable as sunny and innocent Ali. The show builds the audience’s understanding and love for the characters along with tension, which raises the stakes even more; the characters are easy to root for and always in danger, a combination that lends itself to drama and tragedy.

The characters are easy to root for and always in danger.

However, not every character won me over. A combination of unnatural dialogue and strange acting choices make the villainous VIPs, rich men (mostly Westerns) who bet on the players “like horses”, the least enjoyable characters. They’re so cartoonishly evil that when they appear on-screen it’s jarring, taking away the drama and horror of the games by how obnoxious they are. While their presence gives the audience context for the games, I found them unnecessary and distracting, especially compared to the other, more compelling villains.

The plot and pacing of Squid Game is, for the most part, great, hitting a necessary lull in the second episode (ironically named ‘Hell’) to explore the player’s lives outside the games and give context to why they would return. The height of the show, for me, was the sixth episode ‘Gganbu’, which makes up for its relative lack of action by being the most emotionally gripping episode of the show. The show unfortunately drags in the second part of the final episode; while it starts off as a thrilling and tense conclusion, the ending drags on unnecessarily and dulls the impact of its ending. Nonetheless, its not enough to take away from the rest of the show.

Squid Game has yet to be renewed for a second season, but, given the first season’s rousing success, it feels exceptionally likely. I can only hope that it lives up to the standard that it has set for itself.