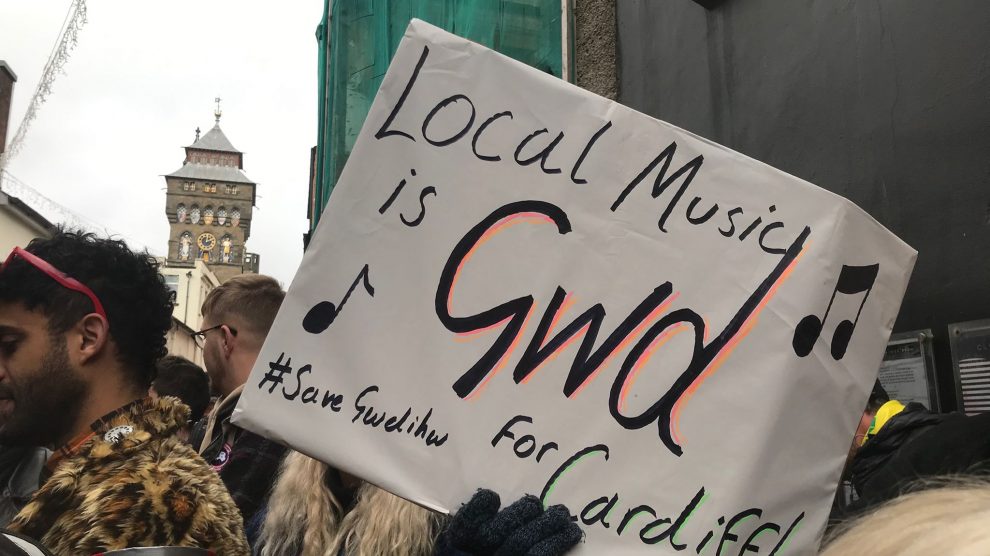 The obvious answer would be yes, independent music venues enable up and coming artists to showcase their talents, thus bringing opportunities that artists perhaps wouldn’t have had otherwise. Before the closure of Gwdihw, the venue hosted Catfish and the Bottlemen and the local band Boy Azooga. Cardiff has brought us bands such as the Stereophonics, Catatonia, Super Furry Animals and of course the Manic Street Preachers. The BBC announced that 1999 was the “Year of Cool Cymru”, which marked the beginning of a predominantly Welsh cultural movement which focused on the aforementioned music groups. These bands set the tone for Welsh music in the 90s Brit-pop scene and emphasised the need for independent Welsh music venues to showcase local talent.

Cardiff has always had a musical reputation, being home to the world’s oldest record shop, Spillers Records, which originally opened in 1894 in The Hayes but is now located in the Morgan Arcade. With this historical presence in the capital, surely we should also focus on keeping our independent music venues. Wales as a country is known for its musical influence – whether that be North or South Wales – so why don’t we take more pride in the musical elements that remain local to us? Venues such as Clwb Ifor Bach and The Moon, for example, encourage both Welsh language and English language bands and artists to perform locally. They often hold after-party gigs for Welsh language festivals like Sŵn festival or Dydd Miwsig Cymru (Welsh Language Music Day), which then continue to publicise the Welsh music scene as well as offering local bands the opportunity to gain a bigger fanbase.

Dydd Miwsig Cymru (Welsh Language Music Day) is a music event which encourages people to learn the Welsh language, listen to Welsh language music and publicises the need for a thriving Welsh music scene across Wales. This year it will be held on the 7th of February (this Friday) and different venues across the country are conducting gigs to celebrate the day. Local to Cardiff, Clwb Ifor Bach will be holding an event with several Welsh bands from across Wales. This year the Welsh language band Alffa is performing in Liverpool, which demonstrates how Welsh music can transcend the language barrier between England and Wales in order to celebrate the culture Wales has to offer. The Dydd Miwsig Cymru website states that it “celebrates all forms of Welsh Language music. Whether you’re into indie, rock, punk, funk, folk, electronica, hip hop or anything else, there’s incredible music being made in the Welsh language for you to discover”.

This demonstrates that the Welsh music scene has something for everyone, whether you are Welsh speaking or not, or whether you like rock music from the likes of Mellt or hip hop bands like 3 Hwr Doeth. Even though the Welsh music scene is varied it doesn’t mean that these venues who showcase a variety of music are protected. This is evident as Gwdihw enabled more rock and indie bands to perform, whereas Undertone allowed drum and bass and house DJs to entertain their audiences. This demonstrates that even though there is a demand for different genres of music by local talents in Cardiff, no venues are ever truly safe from closure even though they perhaps offer something different to other venues. Where other countries thrive off of music within their own languages, we could only really do this within Wales through independent music venues that allow Welsh language artists to perform their music – thus supporting the Welsh language.

Independent music scenes offer more than just an opportunity for local bands, it also offers audiences a space to listen to new music, to meet new people in a space full of culture. The atmosphere in these venues cannot be described easily, as they don’t compare to larger music venues like the Motorpoint Arena here in Cardiff. They allow audiences to get up close to bands and really enjoy themselves, whilst dancing to bands they perhaps haven’t heard before. This enables opportunities that you definitely wouldn’t be able to experience in larger venues.

In order to keep Welsh identity alive within today’s society, and to compete with big names from other countries, we must encourage the growth of independent venues such as 10 Feet Tall. As a city we need to work together to support local talents to ensure a future for Cardiff-based acts. Personally, I believe there is still very much a need for independent music venues to encourage future Welsh talent. But saying that, we must also consider the fact that these venues are costly to run often resulting in big business’ buying them. Which is the case with previous venues in Cardiff. If we allow these companies to take over popular independent music venues, then we’ll have to pay more to see Welsh bands, that is if they give them the opportunity to perform in the first place. Within the Welsh music calendar this year there are several festivals including Tafwyl and Sŵn festival, which I highly recommend attending as they allow you to experience a variety of Welsh acts in a short space of time. Therefore, to ensure a future for local Welsh bands we must not take what we have currently for granted, which is the opportunity to see bands in independent venues while we still have the chance.