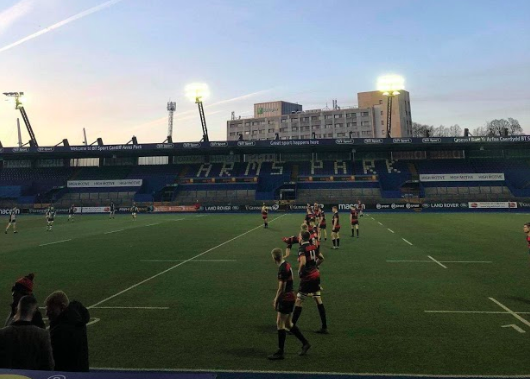 A spirited Cardiff performance saw them defeated 19-20 by a good Swansea side in a close encounter at the Cardiff Arms Park.

Cardiff scored early with a well worked try by Greg Ramage to put them into the lead as he powered over from the base of the scrum.

Soon after, Ed Dunford extended the Cardiff lead and it was beginning to look as though Cardiff were in control of the game.

But when Swansea were able to arrest some possession for the first time in the match they began to progress. Cardiff’s indiscipline allowed Swansea to take themselves within 7 points of the home side.

Half time could not come soon enough for Cardiff as they were camped in their 22-metre line for the remainder of the half. From a scrum on the five metre line Cardiff conceded a penalty. Quick thinking from number eight Cai Davies saw him tap and go and Swansea scored to level the points heading into the break.

After Dunford put Cardiff into the lead again, Swansea made their critical play, charging down a Cardiff clearance kick to cross the line against the run of the game. Cardiff were now chasing the lead for the first time.

Salt was rubbed in the wounds as Cardiff fell the wrong side of the referee again to concede another three points from the boot of Swansea fly half Gwyn Parks.

Cardiff put up a good fightback in the final 20 minutes as Dunford pushed the score to within one point from the tee. However Swansea were able to hold onto possession for the last five minutes to ensure that they would leave the capital as winners.

Another defeat for Cardiff means that they have not won a BUCS Super Rugby match since October 2. On a positive note, the losing bonus point moves them slightly further away from bottom place Northumbria as Cardiff bid to avoid the relegation play-off at the end of the season.

Swansea have now done the double over Cardiff in the league, posing worrying signs for Varsity, which is in Swansea this year on April 29.

However, Cardiff can take positives from the game today as they looked like a very cohesive unit. Dunford generally kicked well to put Cardiff in the right positions and the bench made a good impact when they came on. The game was lost on a knife edge, Cardiff certainly deserved more than a point. Next up for the boys is a tough away game at Exeter, who currently sit at third place in the league.