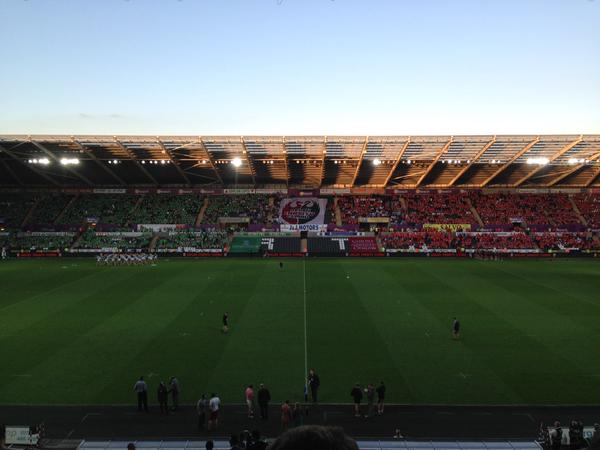 Cardiff secured their first Varsity men’s rugby victory since 2012 to put the cherry on the cake of their 14th successive Varsity Shield triumph.

The game was thrilling from the start, banishing memories of last year’s disappointing 15-19 loss for Cardiff at the Millennium Stadium.

Head coach Louie Tonkin’s men were confident throughout and came up against stiff competition in a Swansea side that have won twelve of the eighteen Welsh Varsity rugby matches since the competition’s inception.

Cardiff got the first try of the gave soon after, as Iwan Phillips sending the travelling fans in red into ecstasy, and Preedy successfully converted the try to give his side a seven-point lead.

Phillips’ try capped an impressive Cardiff move, with some good passing interplay on the left flank before the ball was cut back inside for a free run to the touchline.

Cardiff’s tails were up and they tried to capitalise on that momentum. Swansea were penalised from their kick –off, allowing Preedy to once again kick over and further extend his side’s lead.

A Swansea injury curtailed Cardiff’s dominance momentarily, with a lengthy stoppage allowed for treatment. Once the game got back underway it became scrappy in the middle of the park, with the team in red set on protecting their early lead, and those in green wanting to prevent any further damage.

The theme of consolidation and protection looked set to continue before Swansea gave away another penalty, but this time Preedy couldn’t take advantage, as his kick sailed wide of the posts.

Swansea capitalised and on with half-time approaching they converted a penalty of their own, fly-half Hammett succeeding where his Cardiff counterpart had earlier failed.

Evans then proceeded to score a hugely impressive penalty from the halfway line from Hammett to further cut the lead, but Cardiff responded in emphatic fashion.

Centre Ben Madgwick was impressively fed on a breakaway and managed to bustle his way over the try-line to give Cardiff a lead of twenty points to nine at half time following another successful Preedy conversion.

After a breather and some cheerleading at half-time the game got back underway with an immediate Cardiff attack, but the Swansea defence remained resolute to deny the visitors on the try-line.

It didn’t take long for Cardiff to make the second half breakthrough though, as Jack Phillips took advantage of yet more lax Swansea defending to go over on 54 minutes, with Preedy again adding the conversion.

Hammett provided a reminder that his side were still in the game with a second halfway line penalty minutes later, and were it not for some heroic Cardiff defending they could have scored a try minutes later as they were denied on the try line.

But the pressure from the green and whites was too great and soon after captain Ollie Young converted that pressure into points, scoring a converted try to bring the game to 19-27 with twenty minutes to play.

And Hammett cut that lead further, kicking yet another penalty to add to a fantastic individual performance from Swansea’s stand-out player.

Cardiff managed to halt that momentum however, and contained their opponents well for a good remaining portion of the game that was regularly stalled by injuries and replacements.

Swansea went all-out in the last ten minutes, but couldn’t find a way through, and Cardiff celebrated a huge win on enemy soil, their first Varsity win in three years.

Man of the Match: Ben Madgwick