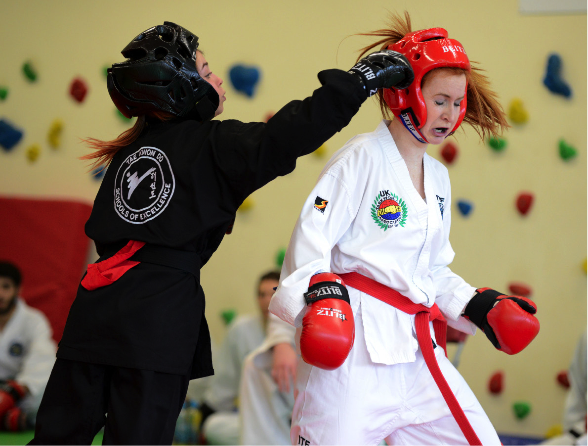 Taekwondo was one of the first events of the day, getting underway at 11am in the Welsh Institute of Sport Dojo.  Having won numerous titles already this year, including being crowned British Universities champions, Cardiff went into the encounter as strong favourites.

The competition format consisted of 13 patterns match-ups, which involved one player from each team performing a set routine of moves, followed by 15 sparring match-ups.  The winner of each match won a point for their team.  With 28 points on offer, 15 were required for the overall victory.

In the patterns competition, the Cardiff team had the opportunity to show off their superior technique, winning 12 of the 13 matches.  This gave them a strong foundation of points heading into the sparring, where they required only three more wins.

To Swansea’s credit, they immediately raised their game in the sparring, taking the first match and forcing a few draws.

There was plenty of intensity and aggression on show throughout the sparring, with a player from each team eventually being awarded a foul.

The potential dangers of taekwondo were also plain to see, as there were several injury delays. The worst of these came in the 11th sparring match, which Swansea were forced to forfeit due to a blood injury.

However, after their dominance in the patterns, Cardiff had already sealed the overall victory with Carlos Anziani’s win in the fifth fight.

The Cardiff procession continued after this, with seven more wins and two draws extending the margin of victory even further. Edward Mugabe more than made up for his loss in the patterns as he won the 28th and final match of the day, sealing a final score of 23-5 to the home side.

He told gair rhydd: “We are yet to lose in Varsity and we have done well all year, but this was probably our best performance.

“We came up against a good Swansea team but, in the end, we showed that we had better experience and we were the better team.”

Beer was hard pushed to name a standout performer in the Cardiff team, commenting that “everyone performed to their very best.”

However, after an extended discussion, the team came to the communal decision that Ryan Davies’ performance, with his ‘kick of the tournament’, deserved to be highlighted ahead of some other great individual displays.