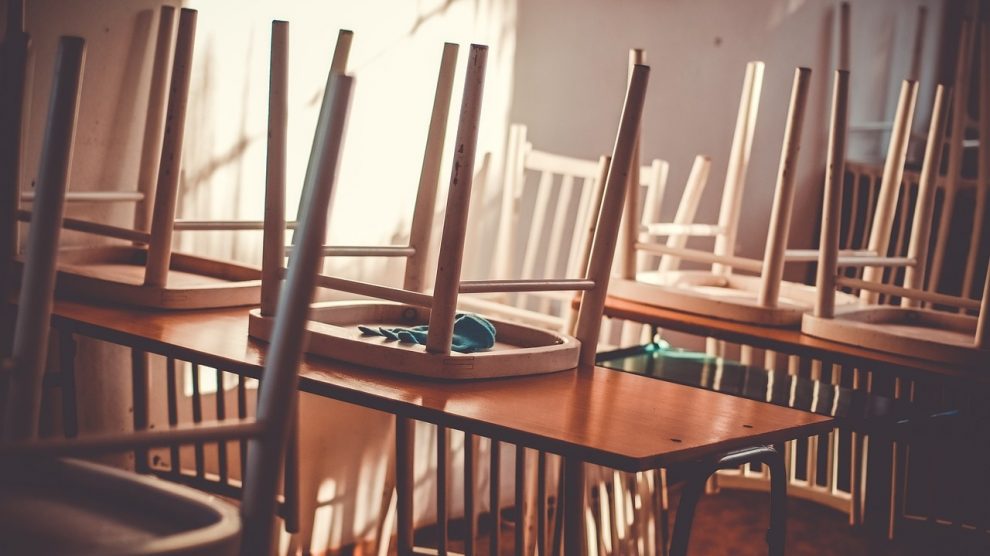 The algorithm led to nationwide protests, being called discriminatory due to the outcomes it brought about.

In this month’s feature, Gair Rhydd looks into the unprecedented COVID-19 related challenges faced by the education system responsible for the future of thousands of students in the UK.

This feature will shed light on the grade-awarding algorithm that was established by both the Department of Education and the grade regulator Ofqual. The algorithm prompted chaos and protests nationwide due to the allegations of class-divide and unfair method of distributing grades that did not take into account a student’s hard work or intellectual ability.

Therefore, on a very short notice, an alternative method was implemented; to prevent any grade inflation based on teachers’ predicted grades, a standardized algorithm was introduced in June 2020, determining the students’ grades using a combination of the predicted grades and previous exam performance by the school or college.

As revealed by the 319 page report released by Ofqual, 39.1% of 700,000 teacher graded assessments were lowered by at least one grade, compared with only 2.2% of assessments which were upgraded. Furthermore 3.3% were dropped by two grades and 0.2% were downgraded by three grades. Directly having an impact on university choices and decisions, UCAS revealed that 15,000 students were rejected by their first-choice university with their algorithm generated grades.

Causing havoc in all four countries of the United Kingdom, this now-infamous algorithm was severely criticized, which eventually led to a number of  U-turns; the most prominent being that A-level results will now be based on teachers’ predicted grades rather than the results predicted by Ofqual’s controversial algorithm.

In this piece Gair Rhydd will speak to various students based in England and Wales who suffered as a result of the algorithm, while shedding light onto a more important issue; the impact of downgraded grades on the minority and disabled students. Furthermore, we spoke to a clearing call agent working at Cardiff University, who saw the situation on results day in the UK first hand.

Judge Our Potential Not Our Postcode

n : number of pupils in the subject being assessed

Ckj : the historical grade distribution of grade at the school over the last three years.

To further understand the impact of the algorithm, Gair Rhydd has evaluated and broken down its impact on the most affected schools and specific targeted pupil groups. As the variables in the formula indicate, this algorithm was dependent on the cohort size, the school, and its historical performance over the past few years.

As exposed by the detailed analysis of Ofqual’s report, the exams regulator found 48.6% of private school pupils attained an A* or A this year – an increase of 4.7%. In comparison, secondary schools saw an increase of just 2%, from 19.8% to 21.8%.

Since this formula varied for larger schools, those usually containing classes of greater than 15 students, and smaller schools, it resulted in a clear distinction of grades awarded to different colleges, after taking into account the school and the school’s historical exam performances.

Pupils at smaller schools, or those taking more niche subjects offered at private schools, saw a pattern of Ofqual resorting to awarding centre assessed grades (predicted grades) rather than using the algorithm to generate grades. This was in striking contrast to large state schools and sixth-form colleges, some of which have a history of educating more BAME students, saw their results downgraded as a result of the unfair application of the algorithm.

Igniting an uproar amongst students, teachers and schools, protests were held as students argued the system was unfair and had not done justice to their individual efforts. This led to a rising pressure on both the Education Secretary, Gavin Williamson, and the Welsh Education Minister, Kirsty Williams, who were now forced to fix the exam fiasco. As more and more stories about alleged algorithm injustices came out, the government was forced into making the unavoidable U-turn of allowing the teachers assessed grades to stand rather than the gy 39% of students’ grrades created as a result of the algorithm.

“this moderation was essential to create a level playing [field] for students. Without it, A-level grades would have increased by 12% in a single year.”

While approximately 39% of students’ grades got downgraded as Ofqual stated, Gair Rhydd spoke to one of the fortunate students whose grades matched the teacher’s predictions. Kelsey Trevett, a former student at the Royal National College of the Blind, now will be joining Oxford University as a result of his achieved A-level grades.

“As results day rolled over closer, it was a huge relief to find out my grades were what I was hoping for. After hearing about the 125,000 downgraded results in Scotland, we all were aware of the unfair algorithm, and although suspected, we were not certain of whether our grades would change.

“In my eyes this algorithm was a complete disaster; considering it was based on variable factors including school postcodes, academic history of students over the past years, and a variety of other factors to award grades to current pupils.

“Clearly the higher achieving grades came from upper class post-codes, since those schools had a better result history, the biased algorithm seemed to follow, and therefore leading to bigger cohort schools being unnecessarily, completely and unfairly downgraded.

“The advantage that smaller class sizes received better grades, in fact did work out for me, since I studied at a residential specialist college. Even though I was very lucky, it does not mean I will not speak about the negative impacts and the disadvantages to specific groups of individuals targeted, and I will help advocate for those who were affected by this.

Trevett also thinks BAME and disabled students are usually underestimated. “As a disabled student, I really get worried about students like me sitting external examinations, GCSE’s and A-levels. The algorithm just further pushes the students down, and I worry students from BAME and disabled backgrounds are at a greater risk and this algorithm will affect their life opportunities going forward, since A-levels directly count for higher education and employment

“Underestimation for us really exists, and it is quite unfortunate.”

“I worry students from BAME and disabled backgrounds are at a greater risk with this algorithm. This will affect their life opportunities going forward”

Gair Rhydd spoke to a clearing call agent, who has been working with the clearing office for Cardiff University for the past four years and describes feeling as “utterly helpless for the students”

Esen Kupeli found that this year, the number of calls the clearing authorities office received was much greater in comparison to previous years since students have “failed to achieve their grades”.

“I remember in the morning thinking; this isn’t a usual clearing shift…. I hadn’t heard about this algorithm yet. I researched it, along with my colleagues, and found out more about it. We were all fuming. The whole experience was frustrating because we genuinely felt so bad for all the students, we were infuriated at the government and the whole situation, but we couldn’t do anything about it, and felt helpless.”

“I had students on the phone who couldn’t afford to appeal, who were predicted A’s and were from families with no history of higher education. These students were to be the first generation to get that higher education which is so readily welcome and available to those from higher socioeconomic backgrounds. This classist, elitist algorithm messed these students up. These students were stuck with grades that had been nonchalantly handed to them without a second thought as to the impact this will have on their future. My heart would genuinely break every time I had to reject such students.”

“Honestly, the tone and mood in the clearing room was solemn over the first two-three days. When the algorithm was retracted and students were awarded their centre assessed grades, the phone lines went mad. We were somewhat unprepared – but all the callers worked extremely hard and got through all the calls. When I came in the next morning, the atmosphere had shifted to a lot more bright and hopeful – we were eager to hand out offers. The only problem was that most spaces on courses had been filled up, so we didn’t even have a lot of offers to give out. Whenever we did, we’d celebrate, it’d make our day almost as much as the students.

“These students were stuck with grades that had been nonchalantly handed to them without a second thought as to the impact this will have on their future. My heart would genuinely break every time I had to reject such students.”

Gair Rhydd spoke to Jemima Coleman, looking forward to joining Cardiff University this September. Coleman describes the situation as feeling quite confident, due to her close friend’s results which came before hers, and she had achieved straight A*’s in the similar subjects they both have worked on together for the past years. “We came out with nearly identical GCSE results and were on track to be getting very similar grades at A-Level, with As and A*s being predicted for us. But when it came to college, I went to Steyning Sixth Form College, and she went to St Philip Howard Catholic High School. Whilst this isn’t a private college, it is held in high esteem by the surrounding areas and is a much more upper-class institution.”

“When I received my results later in the afternoon, nothing went according to my expectations and was downgraded to ABBC from expecting straight A’s. I swore. I cried. I panicked. Not only had I lost my entry requirements, I had also missed my Academic Scholarship. Nonetheless, I was shaking and couldn’t see, but I managed to log onto UCAS Track and see that my place had still been confirmed at the University. ‘Overwhelmed’ is an understatement. I was so incredibly relieved.

“When the relief subsided, my emotions quickly turned to anger. I submitted an appeal based on my higher mock grades. However, then came the Centre assessed grades announcement came too late for many. After such a long wait, people who had otherwise got their University place with their CAGs had by now found places through clearing.”

“For a lot of colleges, the TAGs were the same as the CAGs; the teachers submitted a grade for a student and it was submitted by the college to the exam board, unaltered. However, my college interfered with these grades before they were even sent to the exam board. My Maths teachers actually assigned me a grade A, but leadership at the school – staff that had never taught me nor interacted with me on an academic level – decided to take my grade and move it down.”

“One of my friends lost her university place, and one has been forced to retake Year 13. Feeling that a great injustice had been done, I also wrote a letter to my local MP, Andrew Griffith, and I have not heard anything back from him or his office either. I feel that due to coming from an under-privileged background, I already have to work harder to reach the level of my more privileged peers, and now I feel like I have been setback even further, and it’s not fair.”