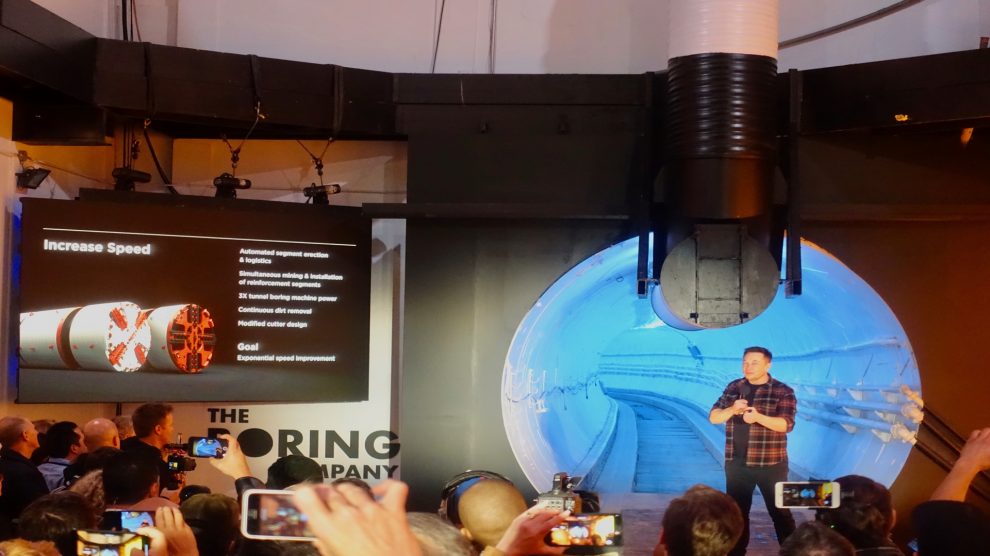 Following approval by officials in Las Vegas, the Musk-founded Boring Company has received permission to extend its experimental ‘Vegas Loop’ project until 2022.

The planned expansion was approved by the Las Vegas Convention and Visitors Authority (LVCVA) board back in December and, in keeping with the company’s vision, will involve carving out a series of underground transportation tunnels to link the city’s various ‘hotspots’ together. Although the project is under a brief hiatus due to the continued growth of COVID-19 cases on the West Coast of America, the project is due to see small-scale operation in the coming weeks.

As outlined in the agreement with the board, The Boring Company will be paid up to USD $6.25 million in return for overseeing the Las Vegas Loop and will not charge drivers to use it, instead, earning revenue exclusively through advertising, sponsorships and rental opportunities.

Elon Musk’s ‘The Boring Company’ (often abbreviated as ‘TBC’) has already constructed a 1.14 mile long ‘Test Tunnel’ in Hawthorne, California and intends to fully demonstrate its futuristic traffic-management scheme is another urban area. Consisting of a new network built beneath existing roadways, the tunnels offer alternative routes to drivers that allow them to quickly and easily bypass traffic. These tunnels will initially require cars to be operated manually however, drivers in Tesla’s semi-autonomous cars will, the company predicts, be able to travel independently through the tunnels “no later than December 31, 2021”.

Steve Hill, the President and acting CEO of the Las Vegas Convention and Visitors Authority (LVCVA), attested that, in order to serve the “growing city and growing tourism base”, modern city planners need to engage with “all the options that are reasonably available” to them. Speaking specifically on the Las Vegas Convention Center Loop, Hill noted that, while there is currently no deadline for opening the Loop to the public, the new transportation service “is just going to be one more really fun one to add to the list”.

Whilst the company’s sights remain set on constructing new, large-scale interlinked mass-transit routes across America (seen in its recent proposal for a Washington D.C. to Baltimore Loop), this project is more distinctly tailored to Las Vegas. In addition to further testing the feasibility of the concept, the ‘Las Vegas Loop’ aims to create localised, direct links between The Strip’s diverse range of casinos, resorts, and other attractions. According to a spokesperson, the Las Vegas Convention Center Loop is “substantially complete” and is currently awaiting the “finishing touches” before it becomes publicly available for Vegas residents.

‘The Boring Company’ itself was only announced by Elon Musk back in 2016 and, as the founder noted in an enlightening TED talk, began as little more than his “personal hobby”. Before specialising in infrastructure and tunnel construction services, the California-based venture first garnered widespread media attention by selling a ‘Boring Company Flamethrower’. Two years after it was founded the company separated from SpaceX, setting out its independent vision to transform modern transportation through its development of high-tech tunnel boring machines (TMSs) and vehicle elevators.

Within the next year, the Boring Company is awaiting permission for two other major projects, including the construction of a another similarly sized tunnel under Los Angeles to connect the Dodger Stadium and East Hollywood, and the aforementioned Washington D.C. to Baltimore autonomous transportation Loop.

Elon Musk, the founder of The Boring Company, voiced his concerns on current road infrastructure and raised that “tunnels, in my view, are the only solution to over congestion because we have a 2D road network and we have buildings in 3D.” Musk, who (in December 2018) owned 90% of the company’s equity, continued in regard to the viability of his transportation Loop: “at this point, I’m confident that this can revolutionize cities and get rid of soul-destroying traffic.”

With multiple developments due to occur across the United States within the coming months, The Boring Company’s futuristic vision for the re-design of modern transportation is increasingly set for integration across the entire globe.