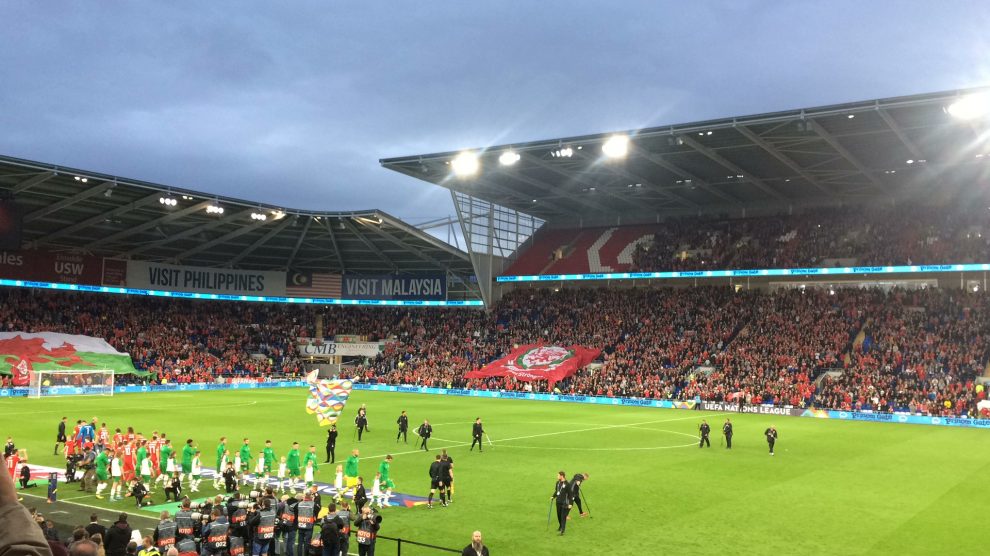 Ryan Giggs’ competitive reign as Wales boss kicked off in emphatic fashion with an impressive 4-1 victory versus Republic of Ireland in the Nations League on Thursday night.

The win for Wales ends a 28-year winless run against the Irish, spanning a total of matches.

Wales extended their lead in the second half when Connor Roberts scored his first goal for the Welsh senior team with a thunderous strike.

The Republic of Ireland managed to pull a goal back in the second half through Shaun Williams but nothing could dampen the spirits of the Welsh players and their fans.

Youngsters David Brooks, Chris Mepham and Ethan Ampadu were all named in Giggs’
starting XI and they certainly stepped up to the plate. All three of them looked as
if they had played for the national team for a number of years with calm and
collected displays at the Cardiff City Stadium.

Tom Lawrence gave the home side the perfect start on 6 minutes when he
emphatically netted a precise pass from midfielder Joe Allen.

The Dragons then extended their lead on 18 minutes from Gareth Bale. A pin-point
long-range pass from left-back Ben Davies gave Bale the time and space to cut
in from the right flank and blast the ball past Darren Randolph.

In truth, the Irish failed to establish any sort of foothold in the first half.
Other than a chance for Preston North End’s Callum Robinson on 36 minutes, Martin
O’Neill’s side gave very little threat to Wales.

Giggs’ side hit dreamland on 38 minutes when Aaron Ramsey made it 3-0.
17-year-old Ethan Ampadu intercepted impressively in the middle of the pitch
and carried the ball well before slotting in Ramsey who finished at Randolph’s
near post.

At the half-time break, Wales would have been ecstatic with the score line. For
all of the build-up to Giggs’ first competitive game, it did not disappoint. The
home side passed the ball confidently, as if they had been playing together as
a starting XI for years.

Youngsters Ethan Ampadu and David Brooks were particular highlights in the
first half with impressive attacking play. For a 17-year-old playing very few
matches at club level, Ampadu showed an air of dominance in the middle of the pitch that
suggested he had been pulling on the Welsh jersey for years.

A tamer second half would have been expected considering
the score line at half time but Wales extended their lead even further on 55 minutes
through Connor Roberts. The right-back scored his first senior team goal when
he thumped the ball home after a beautiful pass from Gareth Bale.

The Dragons dominated proceedings into the second half with confident passing
play across the backline and through the attacking third. And, whilst a lapse
in concentration from Aaron Ramsey gave Shaun Williams the chance to pull a
goal back for the away side, they continued with confident and accurate
passing.

With changes being made by both sides through the second half, you
would be forgiven for thinking that Wales would lose a slight sense of fluidity
about their attacking play.

If anything, the final 15 minutes turned into a good opportunity for Wales to
experiment with some different tactical options. That they did with some great
play from Tyler Roberts on 78 minutes, but his shot was well saved by Randolph.

With 10 minutes left, Wales continued with their positive attacking play and went close to extending their lead with Brooks – who, incidentally, looked bright all game and perhaps deserved a goal.

Wales’ next Nations League match will be on Sunday when they face a Denmark side that could feature fourth division players if contractual rows continue between the Danish FA and senior players continue.