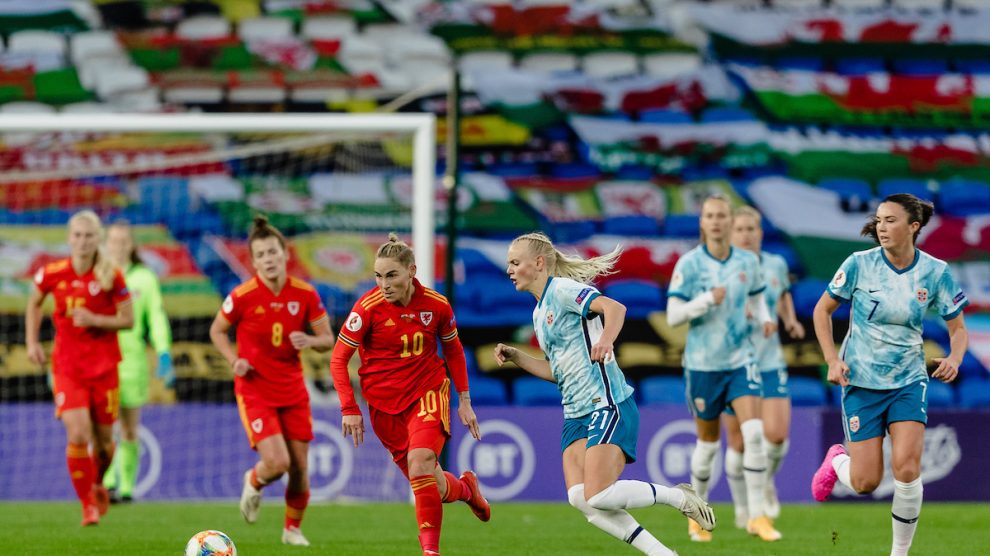 After a difficult defeat against Norway at Cardiff City Stadium on Tuesday, October 27, Wales Women’s European Championship qualification hopes hangs in the balance. The loss means they will have to wait a little bit longer to see if they will qualify for the tournament now set to take place in England in 2022.

In their seventh game of the campaign, Wales faced Norway in a top of the table clash. This game was an important test for the Welsh as the away side had won every game to that point and had already secured automatic qualification for the tournament. A point for Wales would go a long way in cementing some confidence in their qualification hopes.

However, it was not to be as a defensive mishap just outside the box allowed a Frida Maanum strike to find the bottom corner early in the second half.

This defeat sees Wales remain in second place on eleven points in a tight Group C. However, after a 1-0 win in Belarus, third placed Northern Ireland are pushing Wales for that second place on eight points.

After their win in Belarus, Northern Ireland are now threatening to take second and get themselves into the play-offs in place of Wales. In the qualifying stage, the winners of the nine groups automatically get through to the competition meaning that there are seven spots remaining to fill the 16 required for the tournament.

However, if Wales finish the qualification stage on the same number of points as Northern Ireland then they will not be able to make the play-offs. Northern Ireland have a better record against Wales at this stage with two away goals in a 2-2 draw in Newport while Wales failed to score away against Northern Ireland in a 0-0 draw.

This means Wales will be hoping they can secure a victory at home to Belarus in their final game in December, and that results around the other groups go their way in the remaining group games to cement their place in the competition.

Currently, sides such as Denmark, Germany and Russia are second placed with more points than Wales which means that the play-offs could be the only chance Wales get to find their way into the competition in 2022.

In the coming months, it is going to be interesting what fate beholds this Welsh side. In the first half against Norway they proved they were able to compete against these big sides and put in a good performance.

Many supporters will feel that they should have come away with a draw after a Jess Fishlock shot was fired just wide in the final moments, an opportunity that would have found the bottom corner on a different night.

Looking to the future, Wales should take some confidence from that first half against Norway and bring that tactical skill and defensive strength back in their game against Belarus.

One would hope they do not linger on that defeat for too long as there is no disgrace in losing to a good side, they come back even stronger in their final game and finish on a high.

If they come away with the maximum three points, then they have done all they can, as Wales Women’s European Championship qualification hopes hangs in the balance.