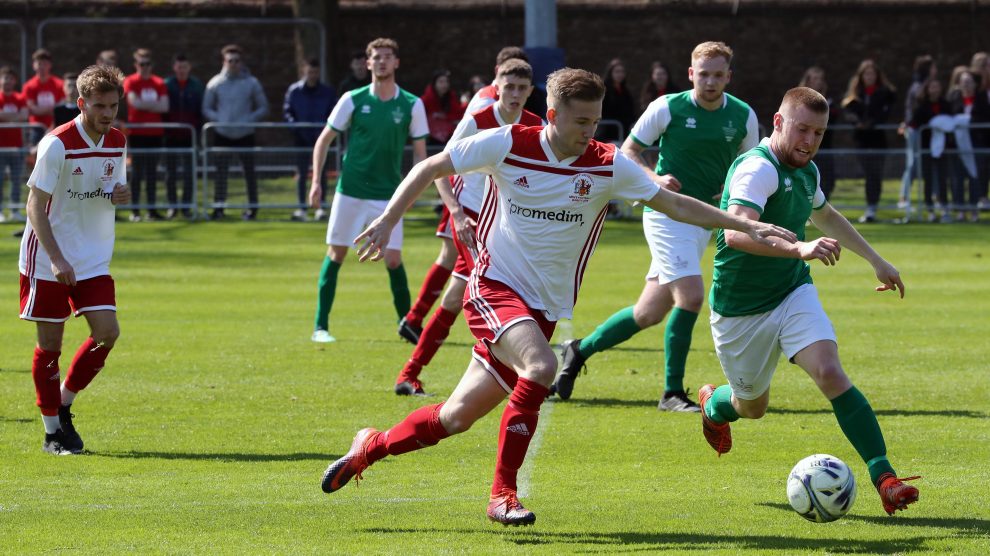 For the second year in a row, it ended honours even in the men’s football as Cardiff earned a hard-fought 2-2 draw on the Sport Wales grass pitch.

The game was an entertaining encounter from the off, and it took just eight minutes for Cardiff to take a surprise lead as the ball fell to Joe Martin inside the box.

The number ten kept his cool to poke the ball into the back of the net before making sure to celebrate in front of the goading Swansea fans. However, going behind seemed to galvanise Swansea, and they began to dominate proceedings.

Much of their threat came from set-pieces as they looked to exploit the height advantage they had, but Cardiff’s defence held firm to clear a header off the line and goalkeeper Brady Lambert was called into action for the first time to push wide a Swansea effort from outside the box.

Despite Cardiff’s resistance, the visitors did score a deserved equaliser just before the half hour mark, with Will Toms tapping in from close range after a cross arrived from the right-hand side. Shortly after, they had completed the turnaround as Tom Johnston unleashed an unstoppable shot from 25 yards out that left Lambert with no chance.

It could have been 3-1 before half-time as Johnston tried to replicate his goal to no avail, whilst Cardiff captain Scott Dabbs put in a vital block in the six-yard box.

Cardiff will have been disappointed with the way they began the second half, as Swansea continued to have the better of the chances and the game began to turn cagey. Marley Bishop-Wisdom, academy player for Bristol City, had come on at half-time for the visitors, and arguably should have put the game to bed with a number of good chances.

Swansea were made to pay for those missed opportunities, as Cardiff substitute Munashe Mandaza levelled the match with 20 minutes to go. A shot from Ynyr Clwyd, known affectionately as Dave, deflected into the path of Mandaza, who was unmarked in the box and calmly slotted into the net.

It seemed as though both teams would not settle for the draw, with the last 10 minutes seeing a flurry of chances. Clwyd produced one of the moments of the game as he appeared from nowhere to slide in and clear the ball off the line. Meanwhile, substitutes Charlie Thompson and Chris Hollands wasted shots for Cardiff, who also failed to make anything of a last minute corner.

In the end, a draw was the reward for a strong defensive display from Cardiff, who had set up with three centre-backs for much of the game. One of that trio, Ryan Dabbs, said afterwards: “We set up to nullify their threats and did very well I thought. I thought we deserved to maybe win the game, but the keeper made some incredible saves for us as well. We’ve done better than I thought we would, so it’s incredible”.