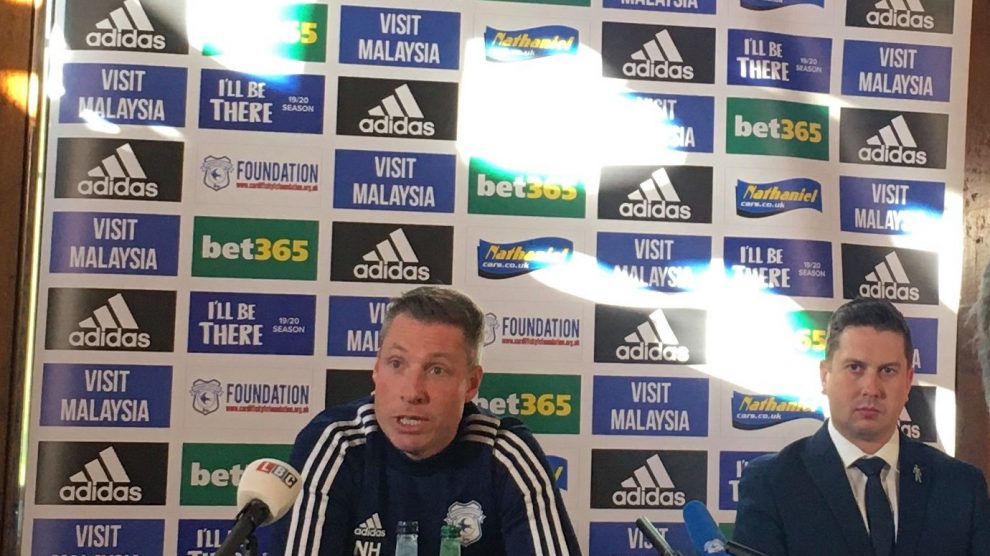 After Neil Warnock left Cardiff City by mutual consent following a home defeat to Bristol City, all eyes shifted towards the announcement of his successor.

As with any managerial change, Warnock’s potential replacement changed by the hour and fans kept a close eye on betting odds and local journalists. Despite big names such as Chris Hughton and Mark Hughes in the rumour mill, the Bluebirds appointed former Millwall boss Neil Harris.

The appointment of Harris, whose managerial portfolio only contains Millwall, had a mixed reaction from fans who would have preferred a more ambitious appointment. Nevertheless, Cardiff City fans will now have to get behind the 42-year-old who will almost certainly need to make a great start to silence the critics.

At his first press conference as Cardiff City boss, Neil Harris was acutely aware of some disappointment from fans over his appointment.

“I know that’s football. I’m a football fan myself and everyone wants a big name… I understand that,” said Harris.

However, Harris outlined that he is looking forward to the challenge of getting the fans on his side by winning matches.

“I have to win people over and I’m prepared to do that. What won’t change is my mentality, work ethic and the fact that I’ll always do what’s best for Cardiff City.

“I’m certainly looking forward to the challenge of working at this great club.”

Having managed at Millwall for four years, Harris’s move to Cardiff City is his first job outside of a familiar environment. As a player, he became Millwall’s all-time leading goalscorer with 138 goals in 432 appearances for the club.

Therefore, managing Cardiff City presents a new challenge for Harris who returns to the Welsh capital after a loan spell of just three games was cut short. Amongst fans, there is naturally a sense of uncertainty over Harris returning to the club after such a short period in 2004.

Despite that, Harris is eager to make this a more successful spell in Wales.

“I left here a long time ago and knew I’d have unfinished business coming back here one day.

“I like to win and that was a big draw for me coming. I know this is a squad of players that can compete and be successful over a period of time, I want to be part of that.

“It’s certainly a privilege and honour to manage at this Football Club.”

Following in the footsteps of the iconic Neil Warnock, Harris was keen to stress that he isn’t going to be ‘Neil Warnock mark two.’ Perhaps one key factor in that differentiation will be his focus on the academy system.

“We want to show a pathway to the young players… there’s that opportunity for them to come through if they’re good enough.”

With that in mind, it could be a case of long-term strategy rather than, as Harris labels it, ‘revolution overnight.’ If that is the case, Bluebirds fans may have to curb their expectations and look to create an environment that allows players to improve.

“It’s not revolution overnight… we have to build these things. [I want] to work with the players I’ve got and bring my own stamp on it.”