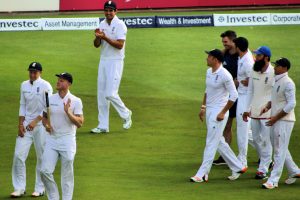 With the series already won, England enter the game with little pressure but every incentive to complete a 3-0 whitewash away from home. Alternatively, the Windies will be hoping for a consolation victory and a performance to restore some of the pride lost over the last two games.

The Windies won the toss and elected to bat, hoping to get a big total and put scoreboard pressure on the favourable English line-up. With the series lost, Chris Gayle was dropped by selectors as a means of giving less experienced players game time with little pressure, and John Campbell was given the job of opening with Shai Hope.

The innings went to the worst possible start with Hope being dismissed on the very first ball of the match, and careless strokes from Hetmyer, Bravo and Hope meant the hosts tumbled to 24-4. Holder and Pooram then constructed a partnership of 21 (the highest by any Windies pair in the innings) before Rashid and Wood were introduced into the bowling attack and claimed five wickets between them, tumbling the Windies to 71 all out. The pick of the bowlers was David Willey, who picked up personal best figures of 4-7 and was solely responsible for dismantling the top order of the batting side.

In reply, England eased into the game and took close to no risks in the first couple of overs. Chasing a very sub-par total and with a very deep batting line-up, settled openers Hales and Bairstow had the license to fling their bat at every delivery and the two managed a combined 57 runs between them before being given their marching orders. Joe Root and Eoin Morgan picked up where the openers left off and showed determination to knock off the runs as quickly as possible, and Morgan finished the game with a six and a four in consecutive deliveries, sealing a historic win in the Caribbean against the world champions.

Player of the series was awarded to England’s Chris Jordan, who picked up six wickets across the three-match series including a match winning four-wicket haul in Saint Kitts. After a successful test series and an ODI series that won the respect of many, West Indies crumbled in the T20 matches, highlighting their reliance on Chris Gayle at the top of the order. With the World Cup just over the horizon, the Windies will be praying that some of the experienced top/middle order players can find form and help take weight off the shoulders of their Jamaican talisman, who can not be expected to carry the team to victories in every match.