From humble origins on the on the outer reaches of Cardiff Fringe Festival Nerd Varsity has emerged as an ambitious programme of fun events which aims to appeal to all, from the casual observer through to the most dedicated fan.

Originally an easy going inter-Society meetup between Sci Fi and Fantasy, Anime, Harry Potter, CRITS and Gaming Societies. This year Nerd Varsity has transformed with two new societies Quiz and Film making their debut, the event has also opened it’s doors to all students who can’t get enough of all things Nerdy, meaning anyone from outside these societies can join the fun and take on Cardiff’s Nerdiest.

Rhys Lloyd the President of Cardiff Sci Fi and Fantasy Society had this to say:

‘This year’s bigger and better than the previous, we’ve got two weeks of events this time, it’s more accessible and we have two new Nerd societies joining us Film and Quiz societies. I’m proud of how far the event has come, and am very excited for what the future holds for Nerd Varsity!’

Highlights of Nerd Varsity include Lightsaber Battles where you can emulate your favourite duels from Star Wars, a Quidditch tournament and Potion Brewing to enchant the keenest of Potter fans not to mention a high-octane Mario Kart Championship! These are just some of the many, many activities taking place, see the full lineup below! 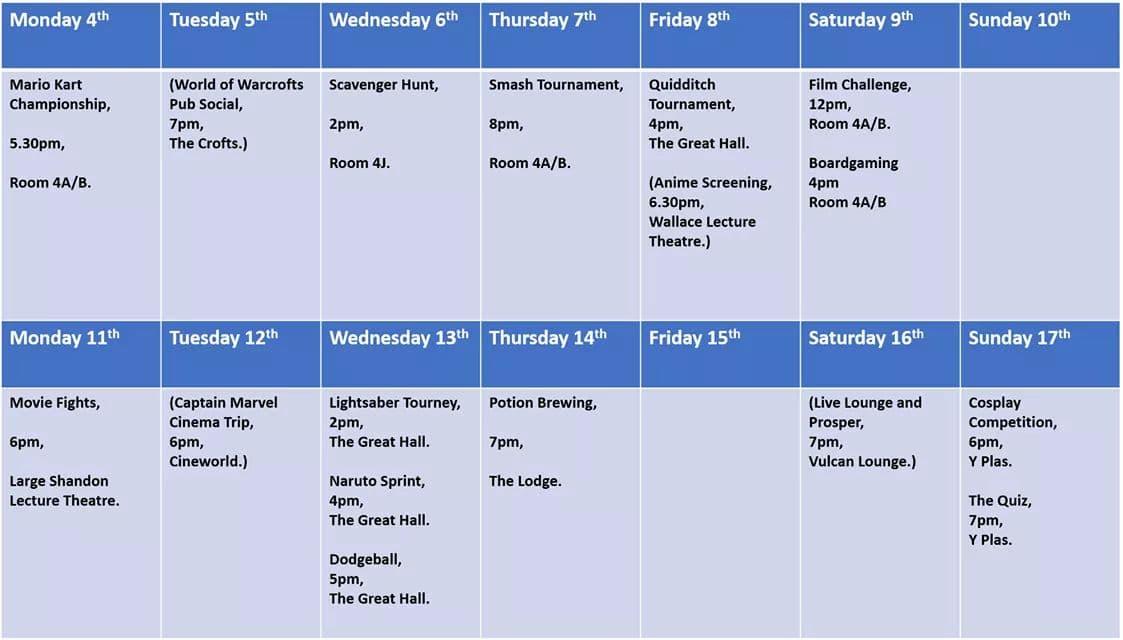 Nerd Varsity Blasts off on Monday the 4th of March, lasting a blockbuster two weeks until Sunday the 17th of March. With student friendly ticket prices of £4 for Nerd Society Members and £5 for Non-Members for the whole two weeks this is certainly one to watch, especially as all profits go to the winning team’s choice of charity helping support a worthy cause whilst enjoying the festivities. Find out more on Nerd Varsity’s Facebook or the Students Union website.

Do you have what it takes to challenge Cardiff’s Nerdiest? Want to show off your lightsabre skills, or cast a spell over the competition? Find out for yourselves as Nerd Varsity returns to Cardiff!