After Bayern Munich were crowned Champions League winners, we round up the tournament action and how well the format worked.

Like many of the remaining sporting competitions this year, the Champions League had to undergo a drastic change to maintain its prevalence in a coronavirus-stricken world. The Champions League was one of the last sporting events to take place prior to many national lockdowns across Europe almost five months ago.

Both finalists from the 2019 campaign, Liverpool and Tottenham, featured in the final round of games before the sporting world came to a halt, but were both knocked out despite being favoured in their respective ties.

UEFA had a tough task on their hands planning a return for the illustrious competition, having to adjust their plans accordingly to those who had already returned to domestic action.

Eventually a World Cup style knockout tournament was deemed the most efficient method to ensure a European champion would be crowned in 2020. It was decided the remaining last 16 games would take place as normal, before the successor of those ties would join the remaining teams in Portugal where the games would take place over the course of a two-week period. Despite its safety and contextual concerns, it would prove to be a frantic festival of football that put on show everything we love about the beautiful game.

Before the trip to Portugal, it was time for the remaining Round of 16 matches that were postponed just before the lockdown was implemented across Europe. Bayern pummelled more goals onto an injury-ridden Chelsea side to add to the Blues end of season woes, whilst Manchester City took care of business against Real Madrid at the Etihad. Elsewhere, Barcelona cruised past Napoli and the shock of the round saw Lyon beat a Cristiano Ronaldo led Juventus, ultimately costing Maurizio Sarri his job.

The quarter finals began with a thrilling tie between French giants PSG and the extremely exciting Atalanta. The Italian side were leading up until the 90th minute before two quickfire goals from Marquinhos and Eric Maxim Choupo-Moting saw PSG progress, and left Atalanta wondering how football could be so cruel. The following day a late Tyler Adams goal saw off Atletico Madrid, adding yet another chapter to the ever-growing RB Leipzig story.

The headline tie of the round was without doubt the matchup between football powerhouses Bayern Munich and FC Barcelona. The two had become familiar foes in the late stages of this competition, so many were predicting a close encounter between the sides.

But never has a prediction been so wrong as the German champions proceeded to blast eight (EIGHT) past the sorry Barcelona. Lionel Messi, who had promised to bring the Champions League back to the Camp Nou, could only stand with hands on hips as Alfonso Davies screeched past him for the millionth time.

Barcelona has not been to successive semi-finals of the Champions League since the Pep Guardiola reign in the early 2010s, and after two embarrassing exits from the competition it calls for wholesale changes at the club. Manager Quique Setién was sacked immediately after the game and more scrutiny upon the recruitment policy and infamous academy system followed.

Speaking of Pep, his team went into their tie heavy favourites over France’s “seventh best team” Lyon. But yet again knockout football demonstrated why you should never attempt to make any sort of prediction, as the Citizens crashed out in a disappointing 3-1 defeat, leaving Manchester City once again looking for answers to their Champions League shaped prayers. 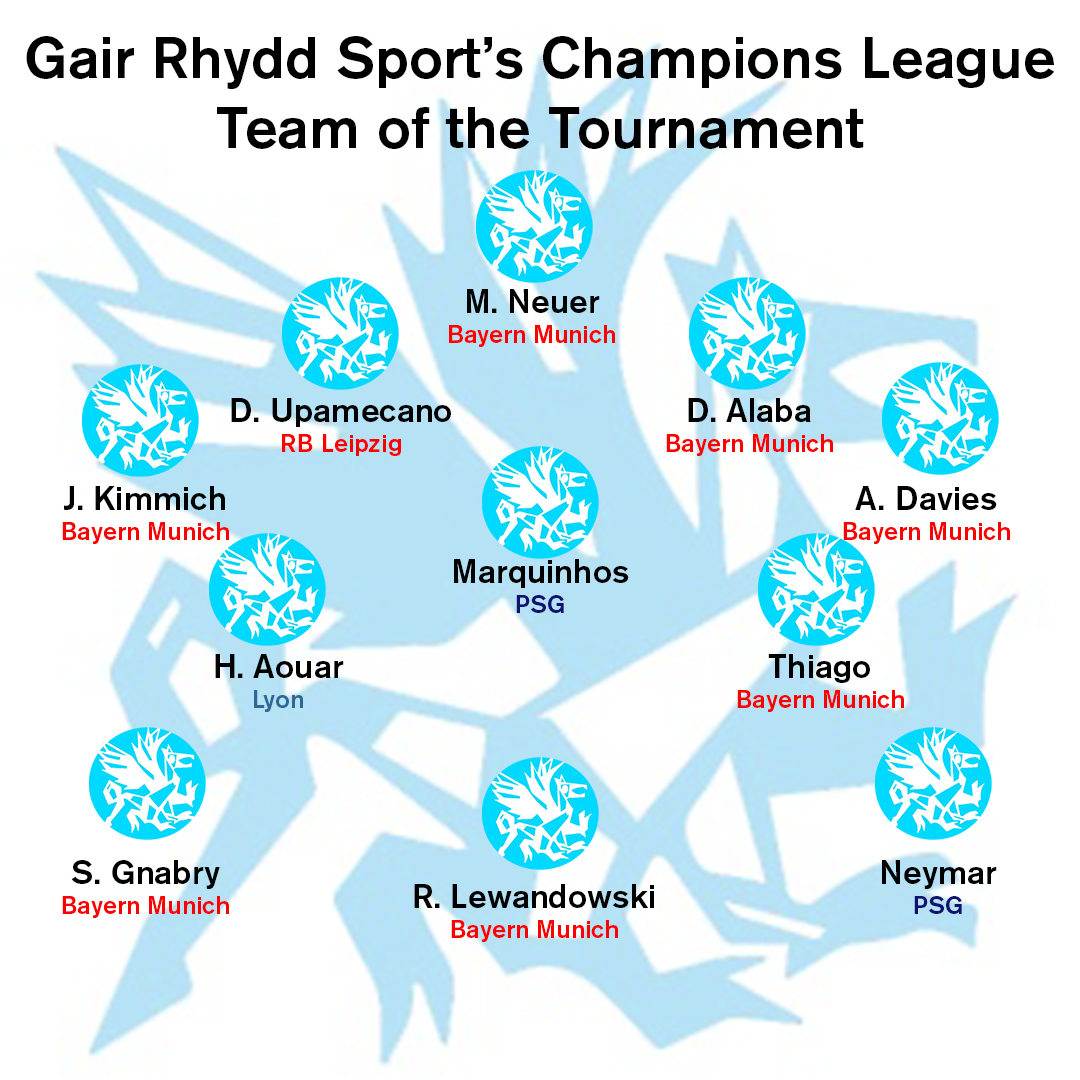 The first of the semi-finals saw PSG and RB Leipzig compete in what ultimately was a very one sided affair, with the Parisians dismantling the young German side 3-0, giving France their first Champions League finalist since 2004.

You would have to go all the way back to 2013 to find the last time Bayern Munich featured in the Champions League final, a somewhat surprising discovery given their strength in coaching and on pitch talent over the last seven years. They may have taken solace in the fact that their downfall had often come in the form of the eventual champions of that given season, from Liverpool in 2019, to Real Madrid in years previous, but I highly doubt it for a club of their stature.

However, this time out there was a whole new level of determination to make this year their own. Having already overcome a horrific start to the domestic season to become the Bundesliga champions, picking up 58 points from a possible 66 to secure the title, the Champions League became their sole focus.

Despite Lyon causing some real problems, using their pace to get in behind the German side’s high backline, goals from Serge Gnabry and Robert Lewandowski booked Bayern’s place in the final with a 3-0 victory, and got them one step closer to their ultimate goal.

After 14 whole months since the competition originally started in late June of 2019, the finale of the 2020 Champions League was finally upon us. PSG v Bayern, Neymar v Lewandowski, Mbappe v Gnabry, Di Maria v Muller, this is a recipe for an all-time classic.

After all the drama prior to the final, on top of the attacking prowess of these teams, it seemed destined this game were to end with goals galore. But like many occasions before, both sets of players seemed to clamp up, not wanting to be the one responsible for “that” mistake that cost his team the game.

The first half did not bring much in terms of entertainment, with Robert Lewandowski striking the post and Kylian Mbappe having a one-on-one effort saved by Neuer the only highlights.

The second half was a little more expansive, especially from Bayern who made their breakthrough on the hour mark when an unmarked Kingsley Coman headed in a cross at the back post. Chances came few and far between for PSG in the remaining 30 minutes, with golden duo Neymar and Kylian Mbappe becoming evidentially frustrated as they failed to break the Bayern barrier, ultimately giving the German side the victory.

The win gives Bayern their sixth Champions League title putting them level with Liverpool, with only Real Madrid (13) and AC Milan (7) having been crowned champions on more occasions.

It has been a long road of heartbreak for Bayern Munich since their last European title back in 2013, but it is fair to say they completely deserved the accolade this time round. Undoubtedly this group is not finished there, with their main core of experience, young talent and the addition of superstar Leroy Sané for the upcoming season, don’t expect title number seven to be too far away.

In terms of the World Cup style, knockout tournament format, it is fair to say it served its purpose and probably exceeded the expectations set for it when UEFA firsted announced it. It also would probably be quite hard to find a football fan who did not enjoy the nightly thrill of do or die football, but is it the way forward?

Realistically, probably not. There is too much money to be made from having two legged ties, as well as many other financial incentives for the clubs themselves (ticket revenue etc.), but for those who experienced this (possibly) one off event, it certainly will not be one they forget anytime soon.