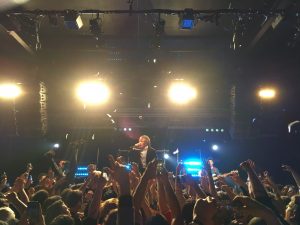 Enter Shikari deliver a storming set at the Tramshed

In the 12 years since the release of their debut album, 2007’s ‘Take to the Skies’, Enter Shikari have developed a reputation as one of Britain’s most exciting and unique rock bands. Their uncompromising and wilfully eccentric sound encompasses a wide array of contrasting influences: from discordant techno to raucous punk, bombastic post-hardcore to shimmering pop. The bands bold and idiosyncratic sound, paired with their politically charged and socially conscious lyrics, has marked them apart from their many contemporaries, a separation heightened by the band’s DIY ethos and refusal to sign to a major record label (all of the bands studio albums have been realised on their own record label, Ambush Reality). With their most recent album (2017’s ‘The Spark’) the band subverted expectations by intertwining the personal and the political and delivering their most emotionally open and raw album to date lyrically, with lead singer and lyricist Rou Reynolds discussing his own struggles with anxiety and insomnia and exploring the concept of vulnerability in amongst the band’s customary incendiary take downs of the sorry state of global politics . However, whilst the lyrics delved deeper inward then ever before, musically the band expanded outward, delivering their most ambitious and accessible album to date. I had the chance to sit down with frontman Rou Reynolds and Rob Wolfe (the band’s drummer) ahead of their blistering set at Tramshed to discuss the making of ‘The Spark’, the importance of being able to express fragility and emotional vulnerability, their upcoming tour plans, and when we might expect to hear some new music.

‘Vulnerability became a political theme’: In Conversation with Rou Reynold and Rob Wolfe

This is the 4th day of the tour, what have the highlights been so far?

Rou: First of all, it’s just gone really smoothly, which we’re really happy with, that literally never happens! The first few shows you normally have to deal with some teething problem and you’re still sorting out MIDI and programming and routing and things like that, but so far it’s been great and the crowds have been brilliant.

Rob: Similarly, the highlight for me would be the first day not being a disaster!

What’s it like to be back in Cardiff, you played the Motorpoint last year?

Rou: Yeah we’ve done that one a few times and it’s always amazing, so much fun. To be honest, I wouldn’t really know we’re even in Cardiff yet I haven’t been out of the venue yet, I’ve just seen this room.

In many ways, you’re most recent album ‘The Spark’ is your most personal to date lyrically. There’s still a heavily political edge to it, but it’s intertwined with more personal themes. What inspired you to go in that direction?

Rou: I think there was a lot of expectancy to make a F*ck Trump, F*ck Brexit album, and yeah there is stuff like that on there, I just thought that’d be a bit too easy.

They’re easy targets to some extent?

Rou: They’re very real targets that need to be targeted, but there’s enough of that going on. The benefit of art, particularly being DIY like us where there’s no real deadlines, is that you can actually sit back and get some perspective about things, and not just make very reactionary music. The last few years leading up to ‘The Spark’ I just had a pretty horrific time and had some really interesting experiences, and that made me want to talk about things and not be afraid to approach vulnerability, which then actually became a political theme in a way. I think one of the reasons we’re are in such a bad place in terms of global politics is because we don’t embrace out natural human state, which is vulnerability.

‘The Spark’ was a far more streamlined and stripped back album musically than anything you’d done before. How was the process of achieving that?

Rob: Well that was actually something we really wanted to work on from when we first started talking to the producers we were considering working with on the album. One of the things we’ve struggled with historically as a band is that if we’re struggling with a song we seem to keep adding more and more layers, and one of the things that we really wanted to try was stripping that back and getting the idea of less is more, focusing on the hooks and the melodies, and that was something that we really put a lot of thought into.

When you tour in different countries and play in new places, do you just treat is just another show or is it ever daunting?

Rob: The only time where it’s a bit daunting and we don’t really know what we’re getting ourselves in for is at Festivals that are really out of the way. For example, we did a festival in South Africa and we had no idea what to expect, it turned out to be awesome! But we tend to find that fans of Enter Shikari are going to be fairly open-minded, accepting, enthusiastic people wherever we go. Even if we go somewhere like the furthest regions of Russia, where we have no idea what to expect from those towns and cities and the local people, the show will always be an Enter Shikari show and the fans will always be Enter Shikari fans, and we can pretty much always guarantee it’s gonna be a good vibe.

Was it daunting playing more stripped down songs (such as ‘Airfield’) live, given that it really puts the spotlight on you directly and there’s nowhere to hide?

Rou: I don’t know really. When we first started playing ‘Airfield’ live it was on a piano and in the middle of the arena on what we called the ‘B Stage’, and that was just exciting! I’m sure I was nervous the first few times I did it, but for us it was cool because you don’t really see bands that come from our world and our background embracing arena style performance in such a way, because that’s almost like a pop production thing to have another stage in the middle of the room, and it worked really well because it made even more communal because it made it even more communal and intimate which really suited that song.

*These are only highlights from the interview, to listen to the full interview check out Xpress Radio on Mixcloud. 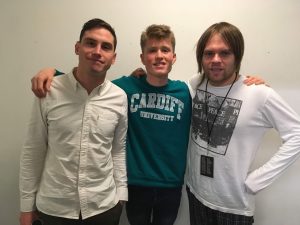 Myself with Rou Reynolds (right) and Rob Wolfe (Left)

After the interview was over and my farewells exchanged with Rou and Rob, I left Tramshed, before returning for the gig several hours later. On my way to the gig I felt excited, yet also odd trepidation, unsure off quite what to expect from the Enter Shikari gig.  On record the band walk a thin tight-rope between the inspired and the incoherent, between gloriously creative catharsis and chaotic cacophony. I was left wondering how the band would coalesce their vast and vibrant back catalogue into a unified set, and wherever Tramshed’s intimate setting would be big enough to contain their titanic ambition. First and foremost, I was apprehensive to see whether the band’s performance lived up to their fearsome reputation as a live act. Needless to say, as I left the venue for the second time later that night, any lingering doubts had been eviscerated and my questions empathetically answered.

The night got off to a strong start, thanks to a short but fierce set from Gloucestershire based punk trio Milk Teeth. Whilst the band’s material can come across as slightly samey and one note, particularly when contrasted with the sonic diversity of the headliners, they made up for this with their strong stage presence and engaging performance. After a brief break, the lights once again dimmed in anticipation of the headliner’s performance.  ‘The Sparks’ cover star, the MIDI Machine affectionately referred to as ‘Sparky’, was situated in the centre of the stage. As a spotlight shone down upon it, an ambient melody emanated from Sparky, and the set began. The band opened with the anthemic ‘The Sights’, a song that perfectly encapsulates ‘The Sparks’ overarching theme of wanting to find an escape from the turbulent age we live in and the anxieties and angst that come with it, with Reynolds defiantly singing lyrics such as “I’m searching far and wide to find a new planet to orbit” on the song’s rousing chorus. From then on, the band didn’t let up, drawing from all 5 of their studio albums to deliver a relentlessly entertaining and energetic performance. The contrast between Reynolds’ calm and gentle demeanour in our interview, and his on-stage musical mad-scientist of rock persona could not be more pronounced; he captivated the crowd with his almost feverish energy and stunning vocals, which ranged from a haunting falsetto on the intimate ballad ‘Airfield’, to a fearsome roar on the heavier tracks. Similarly, the rest of the band’s musicianship and energy was flawless throughout, with the crowd responding by turning near enough the entirety of Tramshed’s intimate floor space into one giant mosh-pit and screaming every word back. The night reached it’s demented zenith (or “complete delirium” to borrow a phrase from the lyrics to the menacing ‘Rabble Rouser’) during the quickfire round, where the band condensed four of their most famous and heavy songs into 10 minutes of adrenaline pumping mayhem to close the first section of their set. After briefly leaving the stage, they returned for a triumphant encore.  Enter Shikari closed their set with the euphoric ‘Live Outside’, an anthem about fighting back against the stresses and anxieties that life brings. As the song ended and the band left the stage for good, I was left slightly battered and drenched in my own sweat, but also filled with a sense of exhilaration and hope for the future.  That night, I witnessed one of the country’s boldest and most unique talents at the height of their powers.