hat does it mean to be a twenty-something feminist in modern society? Eleven-year-old me thought that being feminist meant undertaking some serious acts of Pankhurst-style rebellion. Then I grew older and started to see feminism as embracing a kind of Charlie’s angels-esque #GRLPWR, lip-syncing anything and everything by the Spice Girls or Destiny’s Child and embracing my girlish personality. Basically, reclaiming everything we were once teased about. Admittedly, one seems like it could be more fun than the other (and my lip-syncing days are certainly not over), but as I grew up I started to realise that feminism – real, true, raw feminism is both concepts and so much more. Although I’ve certainly changed and ditched the questionable song choices, as I’ve grown up I still can’t help but feel a niggling pang of guilt that I’m not doing enough. What was I really contributing to the bigger picture? So I started university and became determined to find out. Instead I just became more, and more confused. 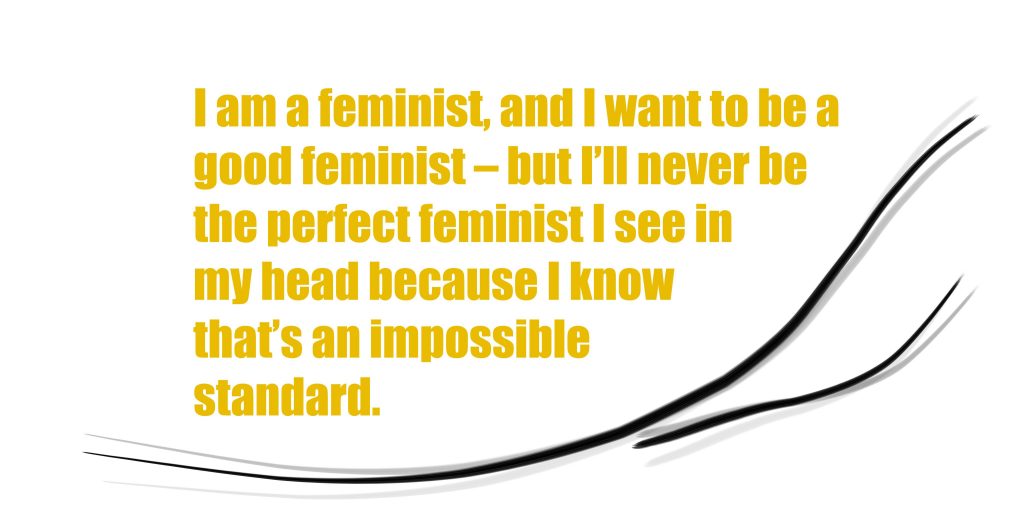 If feminism meant that I could wear whatever I wanted, why did I always feel guilty for becoming grumpy when my friends never noticed my new haircut? Wanting approval surely wasn’t very feminist of me. What about the women all over the world who have no choice over how they style – I should spend more time helping and campaigning for them than fixing my hair. Yet I was annoyed with the fact that no one noticed – does this make me less of a good person? Maybe. But, am I less of a feminist? I’m not so sure. The point I’m trying to make is that at least once in our lives we are going to make a fall back on the high standards we set ourselves. I am a feminist, and I want to be a good feminist – but I’ll never be the perfect feminist I see in my head because I know that’s an impossible standard. So just good for me. This doesn’t mean I won’t give my all to the cause; there just might be some stumbles along the way and that’s perfectly okay.

Some might say that feminism is too multi-faceted, how can it be possible that one woman hates men and the other is sex-obsessed, yet they both call themselves feminist? What those people really mean is that feminism has given women more than they can handle – but that’s not true at all. Feminism is not a black-and-white subject. Yes, it is simple in its ongoing strive for equality between the sexes, but it goes so much deeper than that and we all know it. Feminism has given women the choice to decide who they want to be with absolutely no repercussions. To live without fear, to be whoever they want and wear whatever they want.

I suppose what we’re trying to say with Q3’s first topic this year is that it’s really about time we stop criticising people for how much they fit into the ‘feminist’ mould, or any mould at all really, and look at the bigger picture. After all, as Naomi Wolf once wrote, ‘we deserve lipstick, if we want it’. Just like we deserve to be taken seriously, no matter what.

The Bad Feminists
Summer 2018’s Films vs. the Bechdel Test