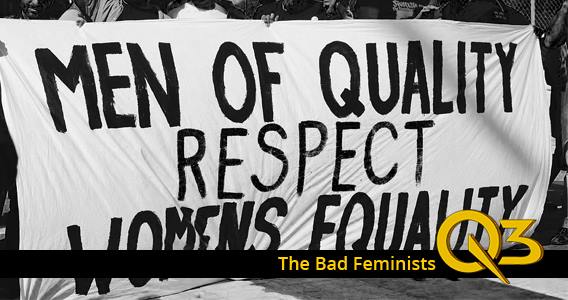 Firstly, it is important to state I am male, and I am a feminist. Women have always been my greatest friends and allies; not being a feminist would be betraying amazing women who have helped me throughout my life. Furthermore, my enemies and opposers are the same as theirs. I’ve been looked down for being feminine throughout my life because I’m not very masculine and my hobbies are more stereotypical of a woman. One day I clicked, society views anything to do with women as inferior. The people who oppressed me where the same people who oppressed women throughout the world. The people that told me to man up, who condemned emotion, were those supporting the patriarchal structure. That was when I became a feminist. My beliefs are simple: regardless of gender, you should have equal rights, and not be restricted by society’s ideas of what your gender should be.

A male feminist may be considered a rare species by some but it’s arguably more that many are too scared to use the F-word. As throughout society, anything to do with the feminine is looked down upon. The majority of young men would undeniably believe in gender equality but continue to view women’s rights campaigners as man-hating snowflakes. Many seem to misunderstand the importance of feminism today for all genders but also take part in the sexist abuse produced by the ‘meninist’ movement. For many guys (and notably, a rising number of girls) it appears to be trendy to be anti-feminist. Many refer to themselves as meninists who thrive on ‘destroying’ feminists. Videos cover social media with ‘meninists’ rebelling against this so-called evil force of women’s rights. People seem to

I have been asked when discussing my feminist beliefs, ‘what about male issues?’. Fighting for gender equality and women’s empowerment doesn’t mean there is no care for male issues. Yet it’s understanding that feminism does more for men than most. This is specifically seen with the devastating male suicide rates, a pawn for some to dismiss women’s rights campaigners, yet these protestors seem to ignore the causes of such problems. Mental health is already stigmatised, yet in men where vulnerability and emotion are arguably shunned, it’s almost impossible for many to seek help. Because weakness, and emotion is not manly and, even worse, it’s considered ‘feminine’. It seems in modern society the greatest insult for men is to be likened to a woman. To tackle these rising issues, it is imperative to shatter the idea that because you’re male or female, you must act in a certain way. We must stop telling men to man up and women that they’re weak. I believe feminism is fighting for this.

I personally reject meninism; though not a coherent group, they are often linked with the mocking and bullying of women covered by the façade of men’s rights. They do simply nothing of use. Frankly, this is frustrating. There are important issues that men face (male suicide being a key issue) yet the ‘meninists’ really do little to aid the problem. They seem to prefer using male suicide rates and homeless to attack women instead of to actually solve the problem. Though many have good intentions, the movement as a whole fails to make progress.

This isn’t to say that feminism is perfect, far from it. There are issues of racism and transphobia still unfortunately present. Yet, as a whole, the movement is still required and is a force of good. As a result, I will continue to consider myself a male feminist.

Why We Need To Pay Attention To Jameela Jamil

Veganism is a feminist issue, and here’s why

‘She was wearing a thong with a lace front’: What happened in the controversial Irish trial and how this case calls for a change in the judicial system
Living as a Woman With a Disability