Intersectionality is arguably the biggest challenge facing modern-day feminism and is certainly entering mainstream feminist discourses more and more – be it in terms of race, religion, class, age, size, physical ability or sexuality. The connection with one group, however, remains largely ignored: vegans. Yes, vegan feminism does exist and no, it is not something ‘snowflake vegans’ came up with to attract more attention. Vegan feminist theory, which has existed since at least the early 90s, is an academic field with strong merit behind it. What does food have to do with feminism? Oh, I am so glad you asked…

Let’s start with the connection between meat eating and stereotypical notions of masculinity. Any beer advert ever released will tell you that there is a set of characteristics that define the ‘real man’. ‘Real men’ supposedly love sports, grunt instead of expressing emotions, tend to sexually harass women and demolish piles of burgers and steaks every day. This is especially seen in media products which target men, such as Top Gear, but is repeatedly reinforced in most mainstream culture – in shows like Gilmore Girls; in cookbooks like Esquire’s Eat Like A Man; even when The New York Times dared people to defend meat eating as a vegan-friendly campaign, they decided to only feature men. This is often portrayed as being part of ‘nature’, a connection to the hunting cavemen; however, an analysis of the representations of men’s meat-eating habits has also shown significant efforts to erase the presence of animals, nature or people’s dependence on it (and besides, I’m not sure if the nature-dependent caveman would have been all that excited about causing global warming). It could be argued that meat eating is presented as a means for fighting the perceived ‘crisis of masculinity’, as a way to get back to men’s original behaviour. Some studies even go so far as to suggest that the shorter male lifespan is partially influenced by the much more excessive consumption of meat by men, as meat eaters are more prone to heart disease, diabetes and some types of cancer.  However, when the topic of health is discussed in mainstream media targeting men, such as Men’s Health magazine, it seems that meat eating’s negative impacts are repeatedly omitted (while eating steaks and abusing women are communicated as ‘a man’s right’ in the same breath). In fact, any attempt to reduce meat-eating, however reasonable, is portrayed as the product of ‘silly gullible women’. During the beef crisis often referred to as ‘mad cow disease’, the British newspapers presented the natural concerns of the public as ‘female hysteria’. 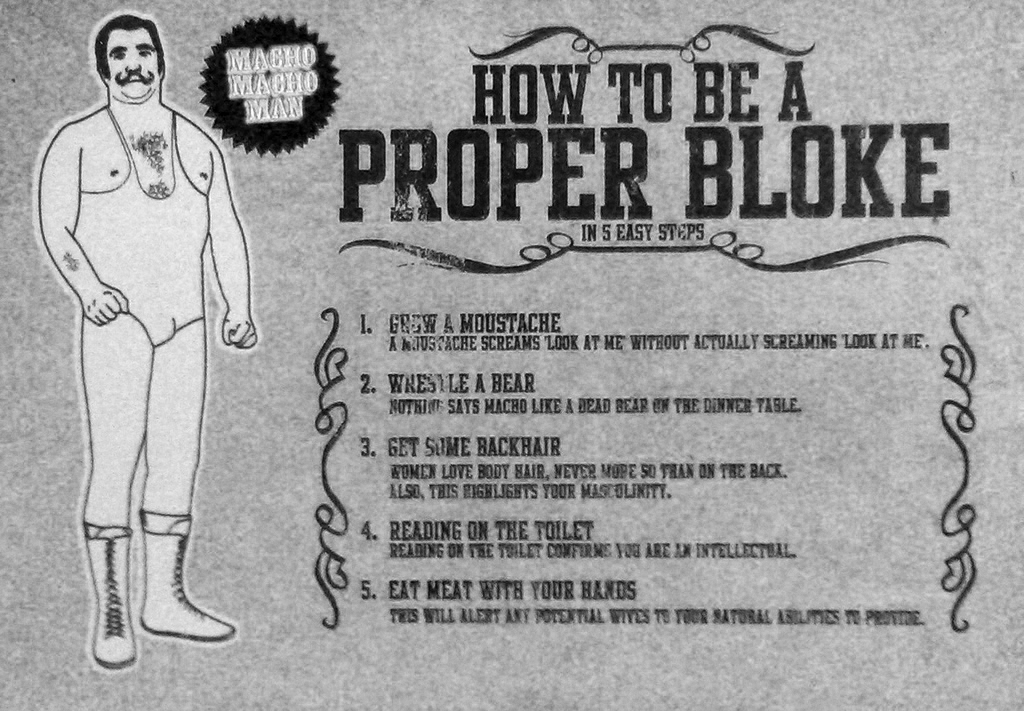 Carol Adams, author of The Sexual Politics of Meat and perhaps the most influential vegan feminist theorist to date, suggests that there is a historical connection between meat eating and masculinity. For a long time, meat was a luxurious product, as its production required outstandingly high amounts of money and resources. Therefore, it was saved for the people with higher social standing – who were the white men. When meat had to be rationed within a family, it was always saved for the men, while women were encouraged to eat more grains and vegetables. This is especially interesting when we consider that meat is mostly advertised as a source of protein, and there are more situations when a woman requires higher protein intake than men (during periods, pregnancies, nursing, etc.). In non-technological cultures, women are often restricted or strictly forbidden to eat meat – even though they are expected to look after the animals. On the other hand, plant-based cultures are more likely to be egalitarian. In other words, the notion that ‘real men eat meat’ reinforces men’s superiority over women. 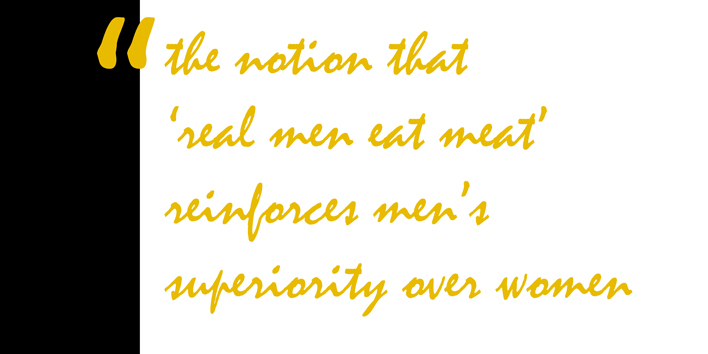 In addition to meat eating being used to secure male dominance, Adams compares the treatment of animals to that of women. The Sexual Politics of Meat suggests that often in mainstream media animals are feminised and women are animalised, while both go through the same cycle of objectification – fragmentation – consumption. Both animals and women are portrayed to “desire being desired” – adverts for meat products often show animals whose wish is to be chosen for slaughter; women are often shown to find relentless and offensive sexual advances charming. Adams’ key concept is the “absent referent”. In the practice of butchering and processing bodies into food, living animals become an absent referent and their reshaped corpses are renamed as meat or food. Films such as Sausage Party, for example, contribute to the invisibilizing of the animals whose bodies are being consumed. Animals are additionally made into absent referents through their use for metaphors for the human experience, with the most common example being descriptions of the female body.  “When women are the victims of violence, the treatment of animals is recalled”, be it through language or symbolic objects such as the bondage equipment used in the exploitative pornography industry. 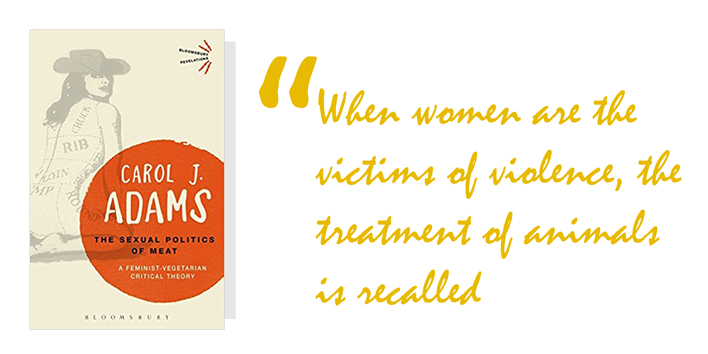 Furthermore, the unpaid labour of women in capitalist societies can be compared to that of female animals. The experience of female animals in the meat and dairy industry significantly differs from that of male ones – as standard practice, female animals repeatedly undergo physical torture, genetic manipulations, sexual assaults, forced pregnancies and separation from their children, before they are finally slaughtered. The female body is extremely profitable to the capitalist system and yet it is ideologically devalued in order to naturalise its exploitation. Corey Wrenn, a prominent vegan feminist researcher, finds that this naturalisation of the exploitation of female bodies has an effect on both animal and human females, as seen through the effect of housework and childbirth on women’s careers and financial income. She even compares this exploitation to slavery. This is visualised in an especially moving way in the film The Herd, in which a group of women are enslaved and used for their breast milk in the same way animals are treated every day.

What is especially worrisome is that women are being exploited even within animal rights activism. Borrowing a thing or two from the advertising campaigns of consumerist companies, activist organisations consistently sexualise women in an attempt to present their cause as more attractive. It is mainly female volunteers that are chosen to represent activist groups, with the hope that a focus on their physical appearance would attract more donations. Women’s stereotypical positioning as nurturing creatures is also used to encourage the protection of animals. Additionally, women are targeted in the promotion of veganism in the same way that women’s magazines promote beauty products. Women are repeatedly told they need ‘lifestyle makeovers’ to be trendy and accepted by society, and veganism is being promoted as yet another makeover. This also places veganism within a category already labelled as ‘women’s concerns’, therefore further discouraging men from considering veganism. 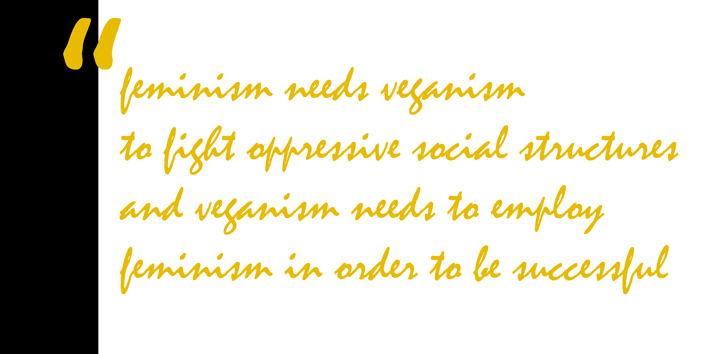 Why We Need To Pay Attention To Jameela Jamil

Living as a Woman With a Disability